Market share of EVs reaches 5.3%. The registrations data is out in all its glorious detail.

Registrations were down 9.5% from 2016. This was far sharper than the decline in US auto sales of 2.5% over the same period. Registrations are now back to where’d they’d been in 2007, before the collapse during the Financial Crisis: 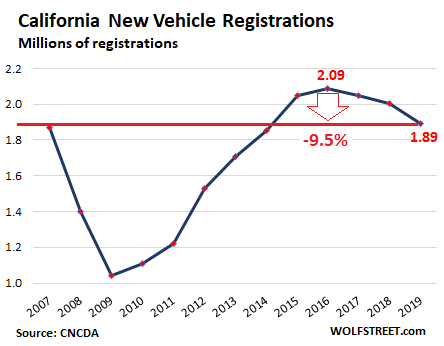 The fourth quarter was particularly ugly: Registrations fell 7.0% from Q4 a year earlier, the 11th quarterly year-over-year decline in a row, and the worst so far.

“Registrations” are not the same as “deliveries.” The difference is timing. After a vehicle is “delivered” to a customer, it takes a little while before it’s “registered” with the DMV. But the timing difference is about the same every year, and so year-over-year comparisons neutralize it.

These are total registrations and include units bought by fleets, such as rental car companies. Retail registrations alone fell 5.9% in 2019, to just 1.66 million units, having plunged 8.2% year-over-year in the San Francisco Bay Area but “only” 5.2% in Southern California.

Even as overall registrations fell in 2019, those of battery-electric vehicles rose 5.2% to a record 99,704 vehicles, nearly triple from 2015. Of them, 76% were Teslas. The market share of EVs reached a record 5.3%-share of total registrations.

California is huge for Tesla. In the whole year, 72,625 Teslas were registered in California, accounting for roughly 20% of Tesla’s world-wide deliveries in the year. Tesla’s year-total registrations in California were up only 3.3% from the prior year, as Model 3 registrations soared, but Model S and Model X registrations collapsed.

Q4 was a big problem: Registrations of Teslas plunged 46%, to 13,999 vehicles, compared to Q4 2018 (25,961 vehicles). It seems many of the people in California who’d always wanted a Tesla have now bought a Tesla. And demand was largely sated in the state. So Tesla started shipping the vehicles to other markets, including overseas to sell them there.

While Tesla’s market share globally was a minuscule 0.4% in 2019, and in the US only 1.1%, in California it was a respectable 3.8%, sandwiched near the bottom of the list between Subaru and Mazda:

In the US overall, the big four automakers are in this order: GM, Ford, Toyota, and FCA. But in California, Toyota reigns supreme, with a share of 20.5%, followed by Honda, then further down by GM and Ford, and further down still by FCA: 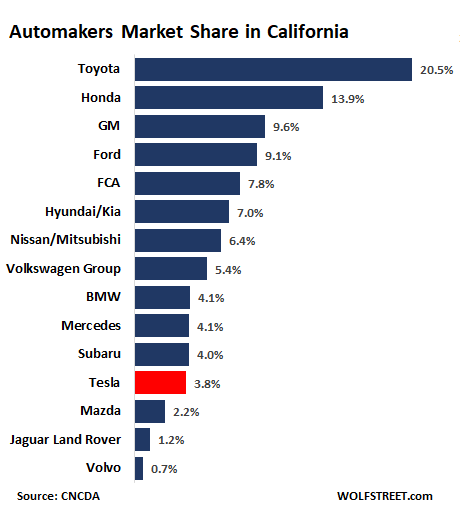 But the used-vehicle market is huge and doing fine.

About a quarter of them were three years old or newer. This includes nearly all vehicles that come out of rental fleets and lease-returns. These vehicles, usually with 20,000-50,000 miles, look nearly new and can be great buys.

Registrations of vehicles six years old or newer jumped by 7.8%. In this category, in terms of automaker, Toyota ruled with a share of 13.9%, followed by Ford (10.5%) and by Honda (9.5%). In terms of models in this category, the #1 bestseller was the Honda Civic.

All categories of used vehicles gained, with even “cars” ticking up 0.1% while light trucks jumped 6.0%. And they increased for all areas of origin:

The fact that the used-vehicle market is still on solid footing, while the new-vehicle market is deteriorating across the US – and in California sharply so – has been widely ascribed to the “affordability problem” automakers have produced by increasing vehicle prices and focusing on building and marketing their more expensive and high-profit trucks, SUVs, and compact SUVs, rather than lower-end cars, where profit margins are paper-thin.

GM, Ford, and FCA have thrown in the towel on most of their car lines, have already stopped selling them in the US, or will stop selling them. They have abandoned that end of the market to the Japanese, Korean, and German automakers. And buyers on a limited budget resort to the used-vehicle market – which is thriving in California.

Alternatives to vehicle-ownership, such as ride-share services, public transportation, company-run transportation systems (such as the Google buses), two-wheeled transporters of all kinds including e-bikes, and walking have become increasingly popular as driving under the congested conditions, and parking, can turn into a punitive activity and at best into an expensive hassle.

GM tries to shrink itself out of trouble. And it shrinks where it wants to grow. But when will it stop shrinking before hitting zero? Ugly charts of GM’s global vehicle sales, by region. Read…  GM Better Figure Out How to Stop Shrinking, I Mean Globally & Pronto, Before It’s Too Late