But the coronavirus impact has not been felt yet; that will come later.

Shipment volume in the US by truck, rail, air, and barge plunged 9.4% in January 2020 compared to the already weak January a year earlier, according to the Cass Freight Index for Shipments. It was the 14th month in a row of year-over-year declines, and the steepest since October 2009, during the Financial Crisis:

The Cass Freight Index tracks shipment volume of consumer goods and industrial products and supplies by all modes of transportation – truck, rail, air, and barge – but it does not track bulk commodities, such as grains or coal.

In December, when the index had plunged 7.4% year-over-year, the steepest drop since November 2009, the calendar got blamed because Christmas fell on a Wednesday, as it does regularly. In January, the year-over-year drop of 9.4% was even worse, from an even weaker month a year earlier, and this time, there is no calendar to blame.

December was the month when Celadon Group, with about 3,000 drivers and about 2,700 tractors, shut down — the largest truckload carrier ever to file for bankruptcy in US history, which came on top of hundreds of mostly smaller trucking companies that had also shut down in 2019.

January was the month when barge operator American Commercial Lines, with 3,500 barges mostly on the Mississippi River, ran aground, so to speak. After having worked out a deal with its lenders in January, it announced at the beginning of February that it would file for a “prepackaged” bankruptcy.

January was also the month when two of the largest US railroads – CSX and Union Pacific – reported terrible results, including dropping revenues and massive layoffs on broad-based weakness in the transportation business.

Rail traffic in January offered no respite from the miserable year 2019: Carloads dropped 5.9% compared to January last year; and containers and trailers fell 5.4%, according to the Association of American Railroads, “reflecting continued softness in manufacturing and global economic weakness made worse by trade uncertainties.”

The 9.4% January plunge in the Cass Freight Index for shipments pushed it below the January 2018 level and near the January 2017 level. The stacked chart – each year is a colored line – shows the large seasonality of the freight business. January is always a low point. But this January, represented by the big red square near the left bottom of the chart, was particularly weak. The top black line represents historic boom-year 2018. The green line represents down-year 2019, which deteriorated relative to other years as the year progressed: 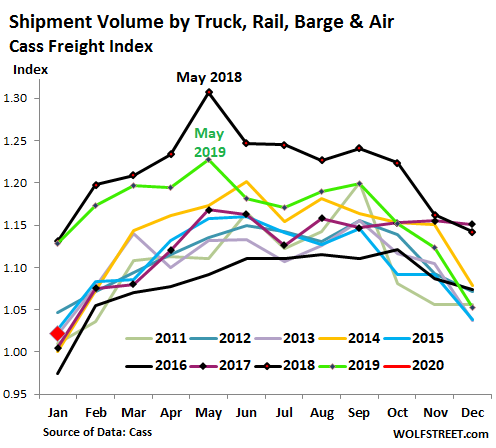 This data is not based on sentiment surveys but on actual freight invoices. Cass derives this data from freight invoices paid on behalf of its clients ($28 billion in freight bills in 2018), representing a large sample of the actual shipments and payments in the US by numerous companies across many sectors.

In January, the Cass index for expenditures – reflecting how much shippers, such as retailers and manufacturers, spent on transportation costs, including on fuel surcharges – dropped 8% year-over-year, after having dropped 6.2% in December. It was the sixth month in a row of year-over-year declines: 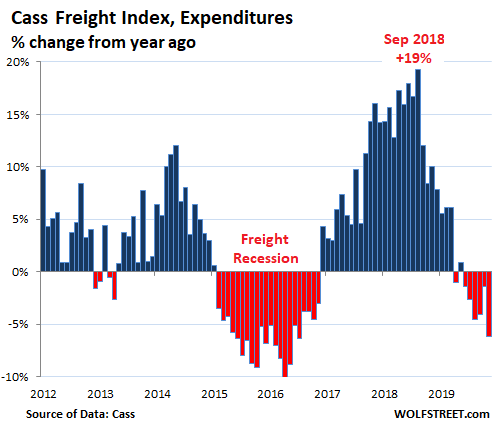 Total freight expenditures are a mix of freight rates, fuel surcharges, and the volume of shipments.

In the first half of 2019, the index remained at high levels despite the sharply declining shipment volume – meaning that shipments declined but transportation companies, such as UPS, FedEx, trucking companies, and railroads, were able to increase some rates. But other rates, such a spot-market trucking rates, fell sharply.

To impress analysts during earnings calls, railroads talked about their strategy of pushing up rates in this climate, and how they would not lower their rates to maintain business – and have lost business to trucking companies in the second half of 2019; hence the railroads’ sharp revenue declines.

But expenditures are still dropping more slowly than shipment volume, an indication that the industry is trying hard to push up pricing, with UPS and FedEx on the forefront.

The average retail price of diesel in January across the US, at a few cents over $3.00 a gallon, was up about 2% from the average a year earlier, according to EIA data (though in February, the price has dropped below last year’s level): 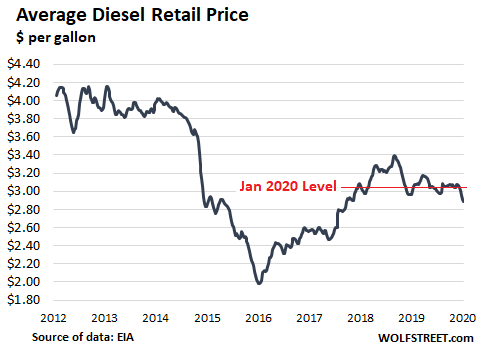 The 9.4% year-over-year decline in shipment volume in January occurred on products shipped within the US in January. The shutdown of factories and supply chains in China, which started in the second half of January, and stopped production cold in much of China, had not yet worked its way into the January shipping data in the US.

Those products that were supposed to leave China in late January and February, but didn’t, will impact US shipments, as tracked by Cass Freight index in February at the earliest, and then going forward.

Inventory levels are very high in the US. For some products, these inventories will provide a buffer, and those products will be shipped out of inventory. But other products that have not been stockpiled to that extent, and some of which may run into supply shortages, will put further downward pressure on shipment volume over the next few months. And that’s when we will see the impact of China’s factory shutdowns on US domestic shipments.

It’s not only Chinese tourists, business travelers, and property buyers who’re not showing up, but also travelers from all over the world who’ve gotten second thoughts about sitting on a plane…. THE WOLF STREET REPORT: Coronavirus Slams Airbnb, Airlines, Hotels, Casinos, San Francisco, Other Hot Spots

87 comments for “It Gets Surprisingly Ugly: US Freight Shipments Plunge 9.4%, Steepest since 2009”