“Give Me a Growing Environment, It’s Easier to Run the Railroad”: CSX CEO.

CSX reported fourth-quarter and annual results Thursday evening: revenues for the quarter fell 8% to 2.88 billion, in line with the freight recession where overall shipments by all modes of transportation in December fell 7.9%, the steepest year-over-year decline since November 2009. 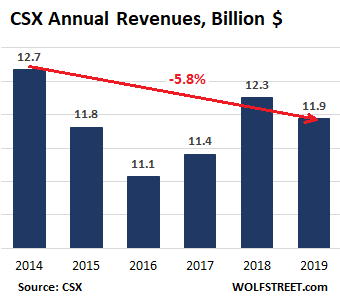 “Give me a growing environment, it’s easier to run the railroad,” CEO Jim Foote noted during the earnings call. “Right now, we’re in tough conditions to put up the numbers that we’re putting up.”

And CSX is not expecting a snapback. “We expect underlying economic demand to remain relatively consistent with current levels,” Foote said (transcript via Seeking Alpha). “It took industrial activity awhile to cool off, and it will take a while to heat back up. Based on this, we expect full-year revenue to be flat to down 2% versus 2019.”

Going into 2020, we expect a continuation of the current macroeconomic trends. We know the consumer economy remains strong. But PMI and industrial production and other macro indicators suggest that we’re not going to see a near-term increase in industrial activity.

Industrial production is projected to be relatively flat for the year and the PMI read in December was 47.2, which was the second worst since ‘09 and the 5th consecutive month signaling contraction. So given this we’re not forecasting a hockey-stick recovery, but any improvement in the macro environment would be upside for us.

Revenue increases and declines by category in Q4 year-over-year, from the strongest to the weakest:

Despite declines in volume, CSX is raising freight rates.

The company said that the 8% decline in revenues “more than offset the benefit of pricing gains” in every category except coal. In other words, despite declines in volume, the company has managed to raise freight rates.

When asked about price cuts to stem the 9% decline in its intermodal business, executive VP of Operations, Jamie Boychuk, flared up:

No, listen, Allison, we’re not going to be cutting prices to grow the business. I think the team here at CSX has worked away too hard to do everything we’ve done to provide our customers with exceptional service out there. Large portion of the vast majority of our intermodal network on the domestic side is under long-term contracts anyway. We’re not looking to grow by just going out and slashing rates. That’s not our game plan. That’s not what we’re going to do.

Operating expenses fell 9%, based on the company’s focus to operate more efficiently – and we’ll get to those elements in a moment. 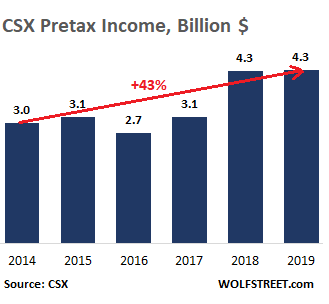 “Labor efficiency” and other “efficiencies”

The difference between those declining revenues and rising pre-tax income since 2014 is the decline in expenses – and this has become a particular passion at CSX, including what it calls “labor and asset efficiency.” So you know what’s coming.

In terms of “labor efficiency”: During 2019, the company reduced its total headcount by 1,567 people, or by 7%, to 20,908 employees. In Q4, the “active locomotive count” was down 10% year-over-year, and other rolling stock had been trimmed down too, which allowed the company to cut its “mechanical workforce” by 9%, and to slash its “mechanical overtime expense” by over 40%.”

These headcount reductions are mostly accomplished by “attrition,” rather than publicly announced waves of layoffs. CFO Kevin Boone:

We’ll continue to focus on managing attrition. There’s a process here where we look at every job that comes available and ask ourselves, given the model, whether that job is necessary. So we’ll continue to evaluate those. With the lower volume, there’s opportunities on the operating side that we’ll find. So we’ll continue to manage the labor side. It’s not all about headcount. It’s about the overtime which we saw some great success in the fourth quarter.

We have big targets next year to continue to drive the overtime down as well. So it’s across the board on the labor savings.

Fuel expenses in Q4 fell 15% year-over-year to $216 million. Part of it was due to a 7% drop in the per-gallon price of fuel. The other factors were the decline in volume and “significant efficiency improvements.”

CEO Foote then mused on the difficulty of cutting expenses in line with the economic environment and revenue declines:

If the business had dropped off 10%, 12% in a couple of weeks in a traditional kind of recession scenario, it would have been easier for us to go in there and find the equivalent amount of costs and take it out of the company.

When it was a slow drip week after week, month after month, a percent here, a percent in the half-year and continue to go down, down, down, down, down, it was more difficult for us to respond to that because we were fearful that we would cut service in areas where we were in an attempt to reduce cost, and we would perpetuate the downward trend by driving more business off the railroad and on to the highway.

So that is a challenge: where can we cut, and where can we maintain our levels of service? If the volumes continue to decline, it creates opportunities for us. And at some point in time, you just get a little more aggressive. We have not done that and – but we have the ability, if it was necessary.

“This isn’t a slash-and-burn exercise that we’ve been going through; it’s controlling the costs,” added Operations VP Boychuk.

Even while revenues fell 3% for the year, and 8% in the quarter, and while headcount was being cut by 7% in the year, and other things were trimmed and whittled down, CSX blew $3.4 billion in 2019 on buying back its own shares – which exceeded its after-tax income of $3.33 billion.

Shipment volume in the US by truck, rail, air, and barge plunged 7.9% in December compared to a year earlier, the 13th month in a row of declines, and the steepest since November 2009. Why is this happening? Read... US Freight Shipments Plunge at Fastest Rate since 2009, Hit 2011 Level: This is Getting Surprisingly Ugly