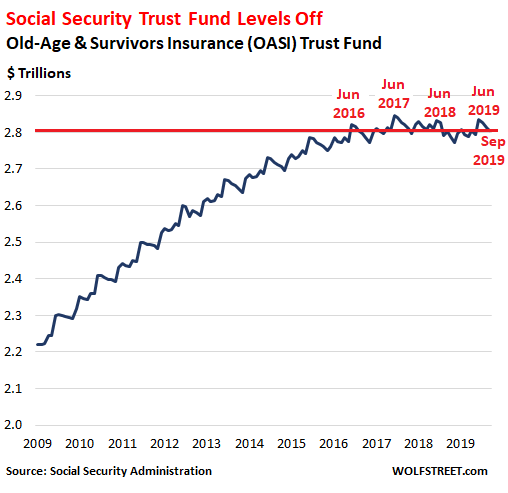 The Social Security Trust Fund is benefiting from the increase of workers – particularly millennials, the largest generation ever – and from rising wages that trigger higher Social Security deductions. And the date when the trust fund is depleted keeps getting moved out further, currently estimated to occur in 2034.

Depletion of the Trust Fund doesn’t mean that Social Security will collapse or whatever. It means either that workers will have to pay in a little more, or benefits will get cut, or a little of both. Social Security has been fixed before. Raising the maximum amount of earnings subject to Social Security tax would be one way of doing it.

Back when I was a senior in high school, the dad of my sweetheart told me that Social Security was a “scam” and that it wouldn’t be around for him to use when he’d retire. He was a CPA and had his own business, an accounting and tax firm. He ended up retiring and collecting Social Security, which was still around. And a few years ago, he passed away, and his wife began collecting survivor benefits. Social security, which has been around for 84 years, has outlived him, and it’s going to outlive me too.

But he gave me a piece of wise and correct advice – for the wrong reason: “Don’t rely on Social Security.” It’s tough to live off Social Security benefits, and it gets much tougher as you get older, as we’ll see in a moment.

Of the SS Trust Fund’s assets, almost all, $2.79 trillion, were invested in long-term US Treasury bonds at the end of September, with a weighted average maturity of 7.8 years. The remaining $12 billion (less than half of 1% of the total) were invested in short-term “certificates of indebtedness,” similar to Treasury bills.

In September, the weighted average interest rate of the securities in the Trust Fund fell to 2.73%, the lowest in my lifetime. The average annual interest rate for each year has been declining relentlessly since 2009, dropping from 4.8% in 2009 to 2.8% in the fiscal year 2019: 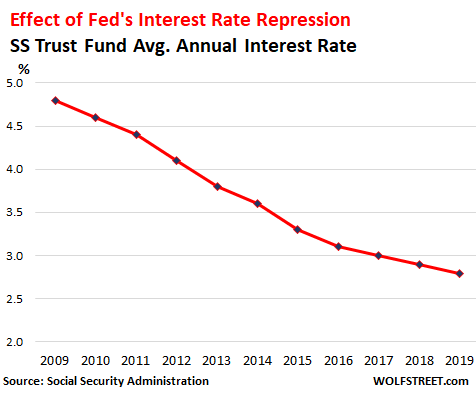 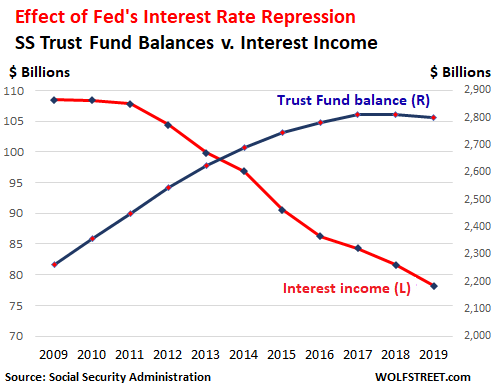 Benefits in 2020 will increase by just 1.6% for the year, starting in January 2020, the Social Security Administration announced on Thursday.

Social Security benefits are adjusted for inflation based on the Bureau of Labor Statistics’ inflation measure for “urban wage earners and clerical workers” (CPI-W). The fundamental problem is that CPI does not measure changes in the costs of living — and “Cost of Living Adjustment” is really a misnomer. CPI only measures changes in prices of the same thing or service at the same quality over time. And when quality of goods (such as electronics or car) or services (such as housing) improves, the BLS removes the cost of these improvements form the index.

In other words, CPI only measures the loss of purchasing power of the dollar, and purposefully does not measure the costs of quality improvements.

This produces a situation where over the past 20 years, the CPI for new vehicles has been flat, even as actual retail prices have soared, as the cars have gotten a lot better, such as going from two air bags to 10 air bags, and from a 4-speed automatic transmission to an 8-speed automatic transmission, etc. Here is my detailed discussion on these “hedonic quality adjustments” for new vehicles and how they relate to CPI.

The 1.6% increase in benefits doesn’t include the increases in prices due to quality improvements. It just compensates for the loss of purchasing power of the dollar (price changes of the same thing at the same quality). That’s one massive issue with the COLA adjustments.

The inadequate COLAs are transpiring every year, year-after-year, and they’re additive, and for retirees who’re dependent on Social Security, which is already tough to live on at the beginning, face a gradual and pernicious reduction of the standard of living they’re able to pay for.

This is why my high school sweetheart’s dad was right, but for the wrong reason, and yes, dear millennials, that’s for you: Don’t rely on Social Security, not because it won’t be there for you (it will be), but because the COLAs are purposefully insufficient once you draw benefits, and the benefits will become more and more inadequate as you age.

This scheme worked wonders for a while but has now run into trouble, and a lot is at stake. Read…  How the SoftBank Scheme Rips Open the Startup Bubble