But even red-hot online sales cooled off late in the year as consumers turned sour.

By Wolf Richter and Nick Corbishley, for WOLF STREET.

Consumers in the UK, generally a hardy bunch when it comes to borrowing and shopping, were not in a shopping mood before the holidays. Retail sales in December at non-food brick-and-mortar stores – ranging from specialty stores to department stores – fell 1.6% compared to December last year, seasonally adjusted, according to the UK’s Office for National Statistics (ONS). The less volatile three-month moving average fell 1.1% year-over-year, the biggest decline since September 2009, when consumers were trying to clamber out of the Financial Crisis: 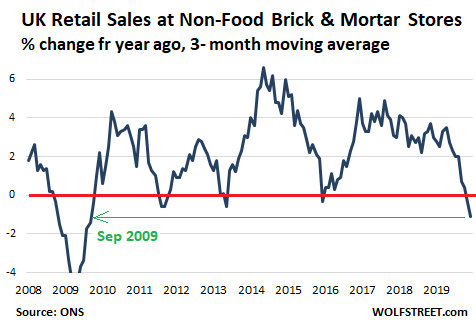 The decline in December caused the non-food brick-and-mortar index to drop to its lowest level since June 2018. And it’s down 3.2% since its peak in July 2019, an indication of just how fast retail sales have deteriorated in the second half of the year: 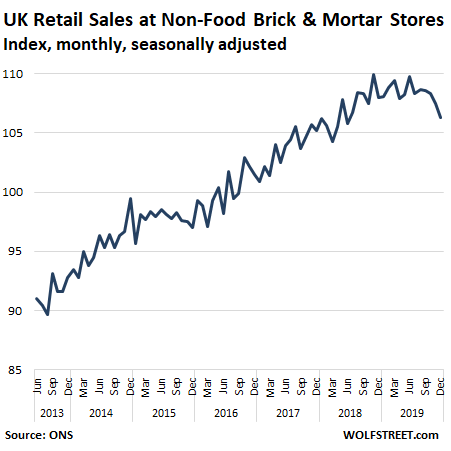 Even red-hot online sales cooled off in the second half.

Online sales in the UK now account for 19% of total retail sales. The biggest gains were in the household goods sector whose online sales surged 23% year-over-year in December. This rapid shift to online retail poses a major threat to the viability of many brick-and-mortar stores that have failed in building a vibrant and large online business.

All combined, including online sales, fuel sales, and grocery sales, total retail sales have fallen 1.6% from the peak in July 2019 – due to the weakness in the second half – but eked out a year-over-year gain of 1.5%.

Why this sudden slow-down in retail sales in the second half?

The British Retail Consortium — which focuses on brick-and-mortar stores and doesn’t cover big online retailers, such as Amazon — hammered the uncertainty surrounding Brexit:

“2019 was the worst year on record and the first year to show an overall decline in [brick-and-mortar] retail sales. This was also reflected in the CVAs, shop closures and job losses that the industry suffered in 2019. Twice the UK faced the prospect of a no deal Brexit, as well as political instability that concluded in a December General Election – further weakening demand for the festive period.”

“We’ve had the perfect storm in recent years,” says Martin Newman, a former multichannel operator for Ted Baker, Harrods and Burberry. “The political uncertainty has fueled a fall in consumer confidence and a subsequent tightening of belts.”

And lots of bankrupt companies. The highest profile collapses in 2019 included Thomas Cook, the world’s oldest travel agent that collapsed in late September, leaving 600,000 travelers stranded abroad. It was placed into compulsory liquidation, resulting in an estimated 6,500 job losses in the UK alone.

Some of the biggest retailers that collapsed include:

A total of 117,000 retail jobs were lost and 14,500 stores were closed in 2019 as a result of brick-and-mortar retail companies hitting the wall or simply cutting costs in a desperate bid to stay afloat, according to a report published by the Centre for Retail Research. The report identifies four main causes of the malaise:

Credit card balances have multiplied by a factor of four in seven years, from the post-Financial Crisis low of £55 billion in 2012 to £225 billion in November 2019. UK households, among the most solvent a generation ago, are now among the most indebted. Retailers and economists cherish that.

But the appetite for fresh debt appears to be fading, partly due to weaker confidence and the weakening retail environment late last year, but also because many consumers have already reached the outer limits of their borrowing capacity. In November, credit card balances fell on a monthly basis for the first time since July 2013, according to the Bank of England. But due to the online spending-and-borrowing spree in early 2019, credit card balances in November were still up 5.6% year-over-year.

Not even the “bankruptcy” word hanging over super-troubled Italian infrastructure giants Atlantia and Autostrade, whose bridge collapsed last year, can get their bonds to reflect any kind of serious risk. Read…  Nutty Bond Wonderland in Europe Just Reached New Heights of Madness

184 comments for “Brick-and-Mortar Melts Down in the UK, Worst Decline Since 2009, as Big Retailers Collapsed, 14,500 Stores Closed”