Not even the “bankruptcy” word hanging over super-troubled Italian infrastructure giants Atlantia and Autostrade, whose bridge collapsed last year, can get their bonds to reflect any kind of serious risk.

On Monday, Standard & Poor’s slashed Italian infrastructure giant Atlantia SpA’s credit rating by three notches, from investment-grade BBB- to BB- (“junk”) amid concerns the Italian government could revoke its all-important road concessions business in Italy in response to the collapse of the Morandi bridge in Genoa in 2018. This downgrade affects Atlantia’s roughly €36 billion of debt that is now considered “junk.”

Atlantia and ASPI, as well as scores of their executives and employees, face a criminal inquiry for potential negligence in the 2018 bridge collapse, which resulted in 43 fatalities and left 600 people homeless. That inquiry is yet to conclude but Prime Minister Guiseppe Conte ominously told La Repubblica this week that Autostrade is guilty of grave negligence, adding that the government had to protect the public interest rather than ensuring a future to private concessionaires.

In September, new evidence emerged that Autostrade employees had falsified safety reports on other viaducts, prompting the firm’s then-CEO, Giovanni Castelluci, to finally step down after 13 years at the helm. During that time the government has gradually tightened the screws on Atlantia, to the point where even the center-left Democratic Party (PD) may also be willing to strip Autostrade of its concession.

The government’s so-called Milleproroghe decree, which is still awaiting passage in parliament, would make it easier and cheaper to revoke a toll-road concession. Instead of having to pay out around €23 billion in compensation for revoking Autostrade’s contract, the government could offer as little as €7 billion. S&P warned this would “significantly increase the risk of a shortfall in liquidity” for both Autostrade and Atlantia.

Atlantia’s CEO recently cautioned that ASPI could even be forced into bankruptcy if its motorway license is revoked and it is not fully compensated, which could push Atlantia into trouble as well. The company already warned last week that Fitch’s downgrade of ASPI could prompt the European Investment Bank and Italian state lender Cassa Depositi e Prestiti to request early repayment of €2.1 billion of loans, of which €1.8 billion are guaranteed by Atlantia.

But none of this — not even the threat of a potential bankruptcy filing by Autostrade — matters in Europe’s nutty bond wonderland, where countries’ and companies’ absurdly low or negative bond yields are continually suppressed by the ECB, and where the relentless and feverish chase for yield is bailing out all bonds.

For example, an Atlantia bond due in 2027 with a minuscule coupon of 1.875%, has rallied over the past two weeks, climbing 6% from 89 cents on the euro to Wednesday’s price of 94 cents. This gives the risky junk bond a yield to maturity of just 2.9%: 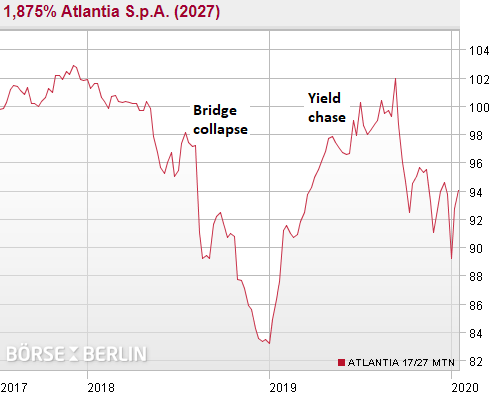 A similar 1.875% bond due in 2029 issued by Autostrade — whose expressway bridge in Genoa collapsed and over which now hangs the bankruptcy-word — has been a little more bedraggled but still trades at 89.4 cents on the euro, giving this junk bond of such an iffy future a yield to maturity of only about 3.25%: 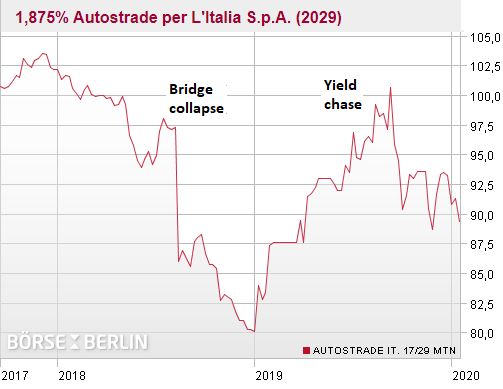 The ECB holds undisclosed amounts of 11 bonds issued by Autostrade and another three bonds issued by Atlantia. While it is not allowed to buy junk-rated debt under its rules, it is not obligated to sell debt that used to be investment grade but has since been downgraded to junk, like Atlantia and Autostrade’s. Other large investors in Atlantia include Lazard Asset Management and HSBC Holdings and Singapore sovereign fund GIC while German insurer Allianz, French energy group EDF and Chinese fund Silk Road hold minority stakes in Autostrade.

The average euro junk bond yield today is a derisory 2.60%, according to the ICE BofAML Euro High Yield Index. Thanks to the ECB’s negative interest rate policy and rampant corporate bond purchases, the bond world in the Eurozone has become completely divorced from any notion of risk, and being compensated for taking those risks, and it doesn’t even seem to matter how deeply Atlantia or its subsidiaries get into trouble. Every dip is a buying opportunity.

Yet for all of the nonchalance of the investment community, the risks posed by Atlantia’s standoff with the government are very real. As notes, a revocation of the concessions could get seriously messy, culminating in costly litigation involving not just Atlantia but also many of its institutional investors. The EU could also get involved.

Given the stakes, it would hardly come as a great surprise if the Italian government did end up offering Atlantia a compromise deal that included a hefty fine, a large compensation bill and reduced toll fares for a number of years but no revocation. But there’s also a reasonable chance it won’t: after all, relations between Atlantia and the government have never been this poisoned. By Nick Corbishley, for WOLF STREET

No one has paid as heavy a price as the generation that came of age just before and after the collapse of the housing bubble and ensuing banking crisis. Read… Young People Still Crushed by Housing Bust, Banking & Economic Crisis: Bank of Spain