Its debt surged to fund the share buybacks. And truckers ate its lunch. But don’t tell any of this to the “market.”

The first thing to know about Union Pacific’s earnings, which it released this morning, is that  despite cutting its workforce by 17%, promising more layoffs in 2020, experiencing a 9.5% drop in revenues and a 10% drop in net income in the fourth quarter, the company blew $600 million in Q4 and $5.8 billion in the year 2019 on buying back its own shares, which it funded with $3 billion in new debt.

This comes on top of the $8.3 billion in share buybacks in 2018. Since it started repurchasing its own shares in 2010, fired up by the Fed’s cheap-money policies, its cumulative share buybacks have reached $34.2 billion: 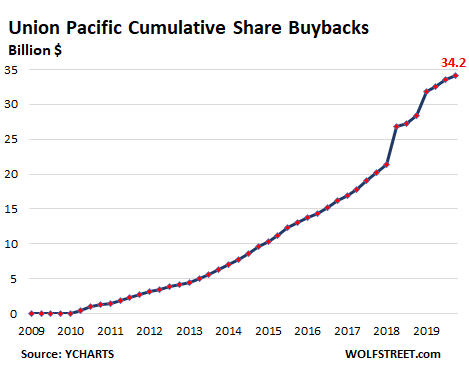 Union Pacific was not immune to the freight recession, which began in January 2019 and got  worse, with December dishing up a decline in shipments, except commodities, by all modes of transportation of nearly 8% year-over-year, the worst episode since November 2009, during the Financial Crisis.

Revenues by category in Q4:

Expenses drop, due to layoffs and lower fuel costs

Operating expenses fell 12% in Q4 to $3.1 billion. Various expense items dropped, including fuel expenses, which plunged 20% on lower price-per-gallon of diesel fuel and less freight to haul. In terms of dollars, the drop in fuel expenses amounted to a savings of $128 million in Q4, bringing total fuel costs down to $512 million.

Throughout 2019, there has been a series of layoffs at rail yards across the country, a few hundred people here and a few hundred people there. When word would leak out that Union Pacific was laying off people at a local rail yard, local news media would reach out to the company and get the prepackaged statement that would always cite its “Unified Plan 2020” and would usually include something like this:

“Union Pacific continues streamlining operations as part of our Unified Plan 2020 operating plan.” Then it would address the specific locations of the layoffs that the media outlet had inquired about, how those operations were being transferred to somewhere else, or were being consolidated into something else.

And it would add something like this: “These changes will improve operating efficiencies, helping us provide customers with safe and reliable rail service.”

Or something like this: “These steps are part of Unified Plan 2020, which streamlines operations as we ensure Union Pacific remains a strong and competitive company.”

This Unified Plan 2020, which the railroad announced in September 2018, is about how the railroad is restructuring its operations to run fewer trains, but with more cars, and bring up the average velocity, and have them “dwell” less time at the terminal, etc. “Precision-Scheduled Railroading,” as it’s called.

The risk is that lousy railroad service is driving shippers “off the railroad and on to trucking,” a fear that CSX expressed when it discussed its operational restructuring, its revenue decline, and its workforce reductions.

And Union Pacific’s 14% decline in revenues in its “Premium” segment (intermodal containers and trailers) where it competes directly with truckers shows that some of its business has already been driven off the railroad and on to the highway.

But it wasn’t enough, and income fell.

Despite Unified Plan 2020, and despite chopping 17% of its employees, and despite lower fuel costs, and lower other expenses, it wasn’t quite enough to overcome the 9% drop in revenues. And operating income fell by 5% to $2.1 billion.

For stocks, reality is irrelevant.

But “the market,” this mix of humans and algos, doesn’t actually care about reality, about dropping revenues, dropping income, layoffs, and about driving business from the railroad on to the highway. All it cares about is share buybacks and the illusion that share prices will rise forever. So today, ladies and gentlemen, the shares of Union Pacific [UNP] rose to a new high.

“Give Me a Growing Environment, It’s Easier to Run the Railroad,” says the CEO of CSX. Read…  Railroad Pain: CSX Revenues Fall Below 2014. Workforce -7%. But Hey, $3.4 Billion in Share Buybacks