Treasury securities are hot. The Fed backed up the truck. US banks & others bought too. But China dumped.

The US Gross National Debt spiked by $1.3 trillion over the past 12 months, to $23.3 trillion. These days, trillions fly by so fast it’s hard to see them. But these are the good times. And we don’t even want to know what this will look like during the next economic downturn: 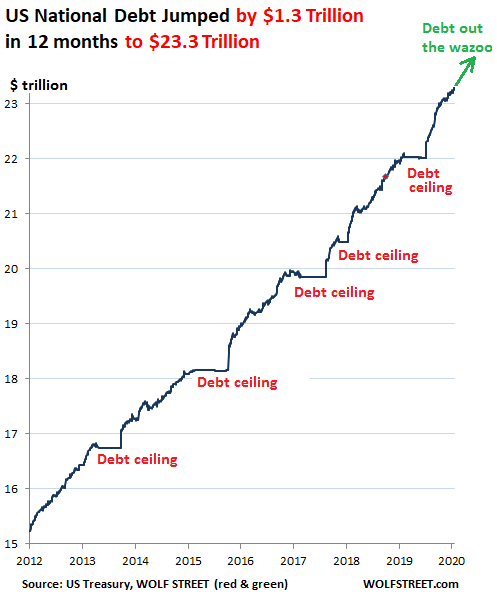 And who the heck bought all this debt?

This debt exists in form of Treasury securities, and each of these securities was bought by some entity in the US or in some other country. These entities fall into five broad categories: Foreign holders; the Fed; the US government via government pension funds and the Social Security Trust Fund; US commercial banks; and other US institutions, companies, and individuals. So here we go…

In terms of foreign holders, the Treasury Department’s TIC data, released Tuesday afternoon, revealed how much of this debt was held, bought, or dumped by foreign investors through the end of December.

All foreign investors combined – “foreign official” holders such as central banks and foreign private-sector investors of all stripes – dumped $83 billion in US Treasury securities in the month of December. But for the whole year of 2019, their holdings rose by $425 billion to $6.70 trillion. In other words, foreign entities bought 35% of the additional debt the US sold in 2019 (in a moment, we’ll get to who bought the other 65%).

The share of foreign holdings fell to 28.9% from prior quarters but was nearly flat compared to a year earlier. The chart below shows the holdings at the end of each quarter, in trillion dollars (blue line, left scale) and as a percentage of total US debt (red line, right scale): 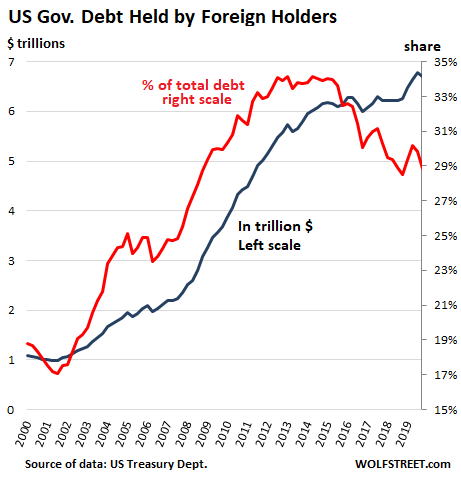 China has been cutting its Treasury holdings every month since June. In December, it shed another $20 billion. Its total holdings are now down to $1.07 trillion, the lowest since peak-capital-flight in late 2016 and early 2017: 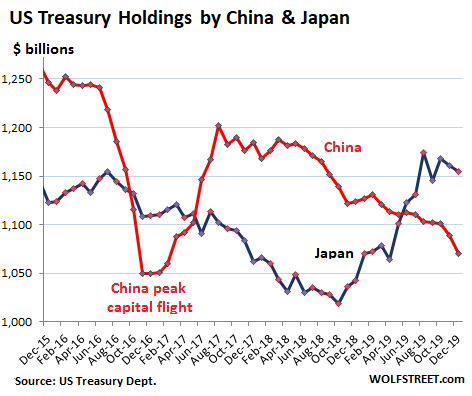 The relative importance of Japan and China as creditors to the US has been declining for years, as the US debt has ballooned and as other creditors have stepped up. The share of Japan’s and China’s combined holdings fell to 9.6% of the total US debt: 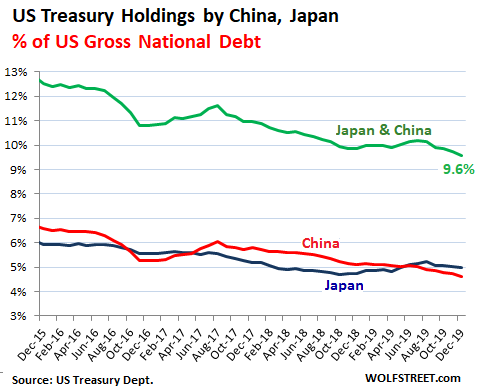 Most of the next 10 major holders are associated with tax havens and financial centers, including Belgium, home to Euroclear, which handles large amounts in fiduciary accounts.

Here are the top 10 also-rans (in parenthesis, their Treasury holdings in December 2018):

If not foreign holders, who else is there? US holders…

US government entities bought $178 billion in Treasuries in 2019, bringing their total holdings to $6.03 trillion. These entities include the Social Security Trust Fund and government pension funds, and their Treasury securities (“debt held internally”) are assets that belong to the beneficiaries of those funds.

US commercial banks bought $131 billion in Treasuries in 2019, which brought their total holdings to $924 billion, according to the Federal Reserve’s H.8 data release on bank balance sheets. This amounts to about 4% of the total US debt.

Other US entities bought the remaining $141 billion in Treasuries in 2019. These entities include US institutional investors (other than commercial banks), including bond funds, pensions funds, insurance companies, hedge funds, private equity firms, plus cash-rich companies such as Apple, and individuals directly or indirectly. And these purchases brought their total holdings to $7.0 trillion, or 30% of the total US debt, making them the largest holder of US debt.

The chart below shows the categories of holders of US Treasury securities, but with “US commercial banks” and “Other US entities” combined into the top category (yellow), holding a combined share of 34%: 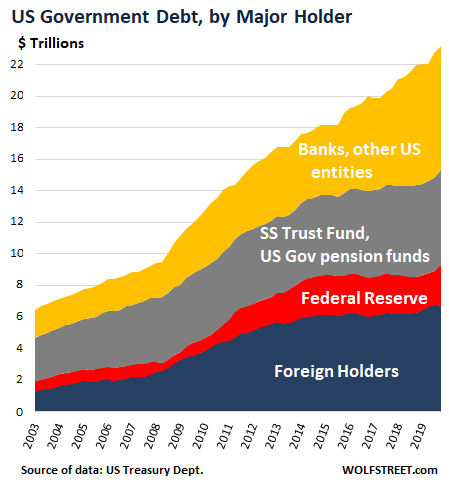 My “Credit-Card Spread Index” blows out. Heck if I knew what that means, but it doesn’t mean anything good. Read…  Credit-Card Interest Rates Soar to Record High, Bond Yields Drop to Record Low: What Gives?

84 comments for “Who Bought the $1.3 Trillion in Debt the US Government Added to its $23-Trillion Pile in 12 Months?”