My “Credit-Card Spread Index” blows out. Heck if I knew what that means, but it doesn’t mean anything good.

The average yield of investment-grade bonds (as per ICE BofAML US Corporate Yield index) dropped to a record low of 2.62% this week. This comes after the Fed cut its policy rates three times last year, from already low levels, to even lower levels, and after it bailed out the repo-market with over $400 billion over a period of just three months. Bond yields across the board have fallen, and it made borrowing for companies extremely cheap: 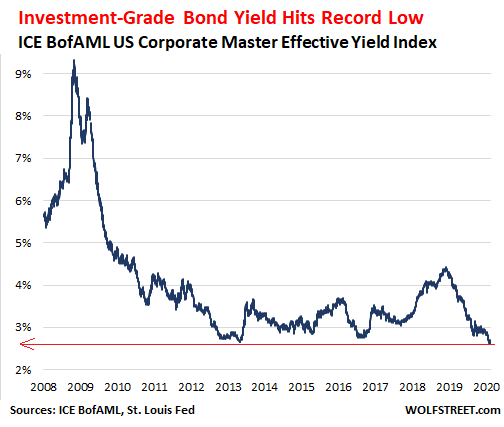 If these ultra-low borrowing costs for investment-grade corporations are adjusted for consumer price inflation, with CPI at 2.3%, this borrowed money is nearly free, and investors have a near-zero “real” return.

But consumers borrowing on their credit cards sit at the other end of the spectrum, getting hosed.

Instead we’ll compare credit-card interest rates to B-rated junk-bond yields (here’s my plain-English scale for the three major corporate credit ratings agencies). This is still not apples to apples, but it shows the trends of where those interest rates have been going for consumers, and it’s, hahahaha, not down!

According to the Federal Reserve Board of Governors’ consumer credit data, the average interest rate on credit card accounts with balances on which interest is assessed – so not counting the theoretical interest rate on credit card accounts that don’t carry balances – was 16.9% at the end of 2019, after having reached 17.1% earlier in 2019, a record in the data series going back to 1994.

The chart below shows this disconnect between the average B-rated junk-bond yield (blue line, ICE BofAML US High Yield B Effective Yield) that plunged to record lows; and the surging average interest rate on credit cards (red line) that soared to record highs. They should move roughly in the same direction with some gap between them, but they’re moving in the opposite direction: 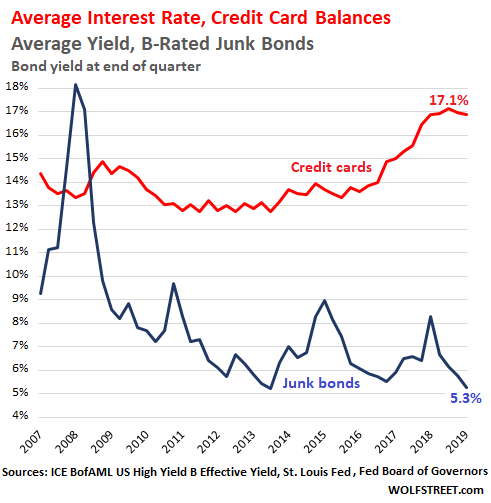 This is the bitter irony: Average credit card interest rates are at record highs while the Fed has spent years repressing interest rates to record lows for just about everything else.

Within this, there is a broad range of credit card interest rates. Some credit cards may charge less than 7% while others charge over 30%. It remains a mystery to me why anyone these days would borrow at 30% or even at 20% – but hey, enough people do, so it’s a thing, and that’s what matters here.

In the bond world, “spreads” measure investor appetite for credit risk. The spread is typically measured as the difference in yield between a category of corporate bonds, such as B-rated junk bonds (considerable risk of default) to Treasury securities of equivalent maturity (near-zero risk of default because the Fed will print the government out of trouble).

If this spread between junk bond yields and Treasury yields is wide, it means investors demand a large premium to take the additional credit risk; for example, during the Financial Crisis, the spread between the average B-rated junk-bond yield and equivalent Treasury yield widened to over 20 percentage points, which was financial panic mode.

If the spread is narrow, it means investors are willing to take large credit risks for only a relatively small amount of extra yield. They’re “chasing yield.” For example, currently, the spread between the average B-rated junk-bond yield and equivalent Treasury yield is only 3.62 percentage points.

My newfangled WOLF STREET Credit-Card Spread Index doesn’t track the spread to Treasury securities, but to B-rated junk bonds. It compares the extra interest credit card holders are paying over somewhat equivalent corporate borrowers. And the index has totally blown out: the spread has about doubled over the past decade, from around 6 percentage points in 2010 to nearly 12 percentage points at the end of 2019: 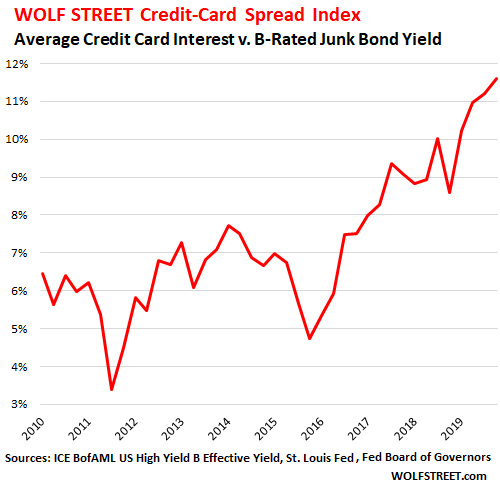 Heck if I knew what that means. But it doesn’t mean anything good.

My Credit Card Spread Index shows, among other things, that consumers are increasingly willing to borrow at usurious rates, despite near record low rates elsewhere in the economy.

But why are consumers willing to borrow at 20% or 30% in the first place? Or even at 16%? These high interest rates almost guarantee that these already strung-out consumers won’t be able to deal with the debt. No one forces consumers to borrow at these rates, but they do. This is a peculiar phenomenon.

The fact that there is demand to borrow at these high rates allows rates to go higher. If consumers decided that the maximum rate is 12%, and no one ever borrows anything above 12%, that would be the peak rate because demand would collapse above it. But that’s not happening among consumers. They rather spend the money and worry about the interest later, which translates into demand for usurious credit that many lenders are eager to supply. And so my Credit-Card Spread Index blows out.

Nearly a quarter of all subprime auto loans are 90+ days delinquent. Why? Read… Subprime Auto Loans Explode, “Serious Delinquencies” Spike to Record. But There’s No Jobs Crisis, These Are the Good Times