Despite the Fed’s proclamations, the dollar lost purchasing power at a good clip.

The inflation measure by the Cleveland Fed – the “Median CPI” – rose at 0.3% in January from December. This translates into an annualized rate of 3.7%. For the 12-month period, the Median CPI rose 2.9%. Since July last year, the index has ranged between 2.9% and 3.0%, the highest in the data series launched during the Financial Crisis.

The Median CPI is based on the data from the Consumer Price Index (CPI) but removes the extremes of price increases and price decreases, that are often temporary, to reveal underlying inflation trends. The chart shows the 12-month Median CPI, and for comparison, the “core CPI,” (CPI without the volatile food prices and the extremely volatile energy prices): 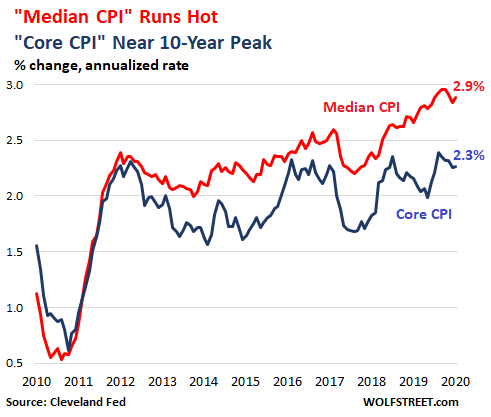 At the other end of the spectrum, the price index for miscellaneous personal goods soared at an annual rate of +41% in January from December, watches and jewelry at a rate of +27.0%, footwear at a rate of +17.0%, car-and-truck rental at +15.0%.

The Median CPI tracks the mid-point (median) of the 45 major components of the Consumer Price Index. This midpoint changes every month. Each component has a weight in the index – the “relative importance” (%).

The midpoint of these 45 components, from the biggest price declines to the biggest price gains for the month of January, shown as annualized rate, is the first item where the cumulative importance is 50% or more. In January, this item was Education (bold in the table below), whose annualized rate of inflation was 3.7%. This marked the midpoint for the Median CPI (if your smartphone clips the four-column table, slide the table to the left):

As reflected in the table above, inflation indices track a large number of items whose prices are all over the place, some soaring, others plunging, for reasons of their own, including temporary factors that will soon reverse and drive prices in the other direction. An inflation index combines these movements into one measure that attempts to indicate how fast the overall purchasing power of the dollar is shrinking with regards to consumer goods and services.

However, it has been the Fed’s contention – and that of many economists whose pay is more than adjusted for inflation – that the dollar’s purchasing power with regards to consumer goods and services is not shrinking fast enough.

Consumers vigorously disagree with the Fed’s contention that the dollar needs to lose its purchasing power faster. Unless consumers can figure out how to make more money, they’re getting the short end of the stick. And if they make more money, price increases just eat it up.

In turn, the Fed and many economists counter that consumers should make up for the loss of purchasing power by borrowing more vigorously and increase their spending that way.

The Fed’s 2% inflation target is based on the “core PCE” inflation index, which generally tracks lower than any other inflation measure, which is why the Fed holds it up as its thermometer. The core PCE price index rose at a 12-month rate of 1.6%, compared to the 2.9% for the median CPI. So maybe the Fed should get a new thermometer and declare victory, no? 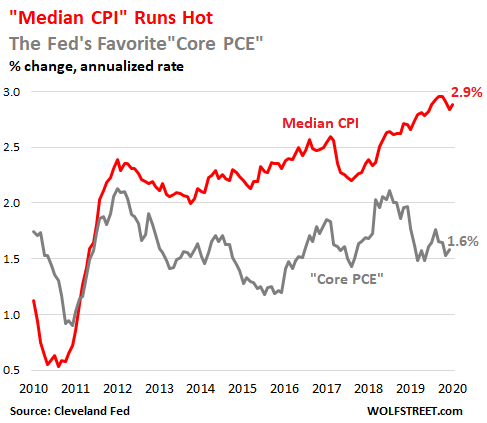 Consumers have not been entirely deaf to the Fed’s pleas. Consumer debt – student loans, auto loans, and revolving credit such as credit cards and personal loans but excluding housing-related debts such as mortgages and HELOCs – jumped by $187 billion in the fourth quarter 2019, compared to a year earlier, to $4.2 trillion, and reached 19.3% of GDP, the highest ever. Read…  The State of the American Debt Slaves, Q4 2019