Consumer credit rose to 19.3% of GDP, the highest ever.

Consumer debt – student loans, auto loans, and revolving credit such as credit cards and personal loans but excluding housing-related debts such as mortgages and HELOCs – jumped by $187 billion in the fourth quarter 2019, compared to a year earlier, or by 4.7%, to a record $4.2 trillion, according to Federal Reserve data released Friday afternoon: 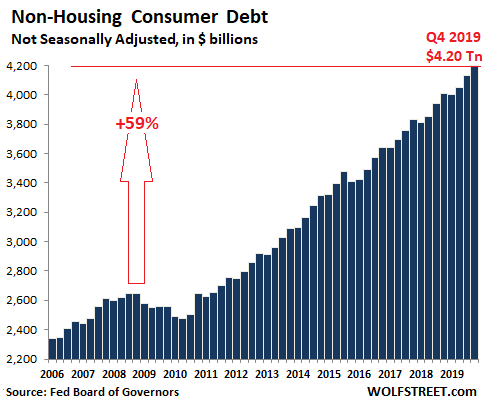 How much did all this borrow-and-spend contribute to GDP?

Without this $187 billion in additional spending funded by $187 billion in additional debt, the US economy would not have grown 2.3% in 2019, but only about 1.8%. This is why economists from the Fed on down want policies that encourage consumers to spend money they don’t have. It’s the American thing to do. And if there’s a hiccup down the road, so be it. And now there are some hiccups.

How heavy is the burden of this consumer debt on consumers? For a substantial part of Americans, there is no burden. They pay off their credit card balances every month, they have no student loans, and if they financed their vehicles it may be through leases that they took out not because that’s the only way they could buy the vehicle but because they saw various advantages in leasing.

Then there is another group of Americans where every month is a mad scramble to make ends meet. Some earn good money but live above their means. Others are scraping by every month on low incomes. Both are up to their ears in debt. They’re one or two paychecks away from defaulting on that debt. That’s where the debt burden is, and that’s where the risks are. But in terms of overall consumer debt, this bifurcation gets averaged out.

When measured against the size of the US economy, that $4.2 trillion in consumer debt amounts to 19.3% of nominal GDP, the highest ever in the data. Here are the last two decades: 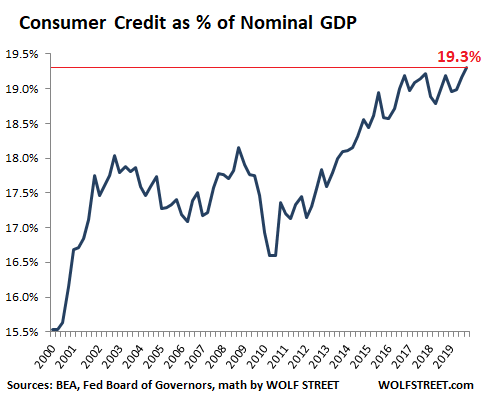 But keep in mind: household mortgage debt, which is not included in consumer credit, amounted to $10.5 trillion in Q4. It had plunged after the Financial Crisis and is now still a tad below where it had been at the peak in 2008, though the population, the economy, the housing stock, and home prices have grown since then. So, unless home prices crater again, Americans are in pretty good shape in terms of housing debt.

The problem is in consumer credit. And the big force behind the surge of consumer credit to 19.3% of GDP aren’t credit cards, as we will see in a moment, but auto loans and particularly student loans.

Credit cards and other Revolving credit

Outstanding balances on credit cards and other revolving credit, rose 4.2% year-over-year in Q4, to a record $1.1 trillion. But in overall terms, it amounted to only 5.4% of GDP, a big drop from peak-credit-card-craziness in Q4 2008, when it amounted to 6.9% of GDP.

So when it comes to credit cards, Americans have become more prudent, to the great anguish of our economists and the banks that charge between 8% to 30% interest on those loans. Note the seasonality, induced by holiday-shopping season in Q4 and hangover season in Q1: 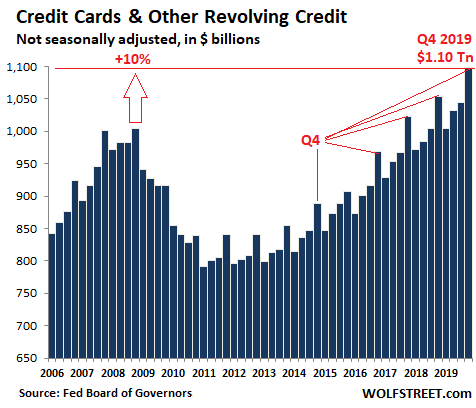 Auto loans and leases – a hiccup for automakers.

Total auto loans and leases outstanding for new and used vehicles in Q4 rose 3.5% year-over-year, to a record of $1.193 trillion. Since the pre-crisis peak in 2008, auto loan balances have soared 48%. In terms of the size of the overall economy, auto-loan balances have ticked up from 5.3% of GDP in Q4 2008 to 5.5% of GDP currently. That was high back then, and it’s even higher now: 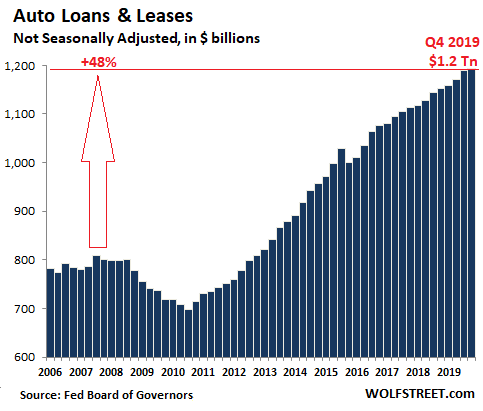 Not so ironically, the 3.5% year-over-year increase in auto loan balances occurred despite a 1.2% decline in new-vehicle unit sales. This is the result of higher average transaction prices for new vehicles, rising loan-to-value ratios, and longer average duration of auto loans (therefore slower pay-downs). This debt is getting more difficult to deal with for many consumers, and it’s making it impossible for many to trade and buy a new vehicle, and US automakers and some imports have seen unit sales decline since their peak in 2015, and the industry overall has seen unit sales decline since the industry-peak in 2016. 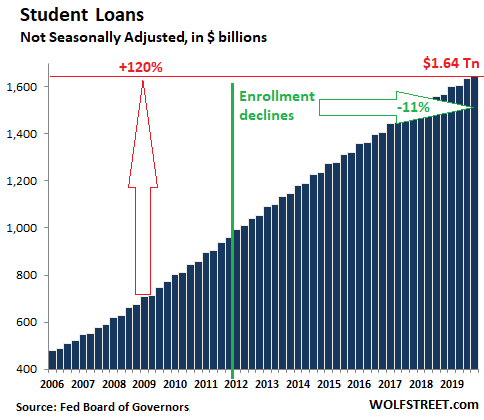 Student loans is where consumers are really strung out. But according to a study by Moody’s, student loan debt is concentrated in a relatively small group of students, including graduate students. According to Moody’s, at the end of 2017, half of the 45 million federal student-loan borrowers owed less than $17,500. All combined, they owed less than $200 billion. This is very manageable debt.

But at the top, 7% of federal student loan borrowers owed over $100,000 each, and these were primarily borrowers with one or more graduate degrees. And that small group of 7% of all borrowers owed $500 billion.

The amount students spent on their education, in terms of the percent of median household income, had soared in the years through 2012 but then hit a ceiling and has since remained roughly flat with median household income, according to Moody’s study. So why did loan balances soar like they did since 2012? Repayments have come to a trickle, with many students not even paying enough to cover interest expenses and their balance have actually risen. Here is my plunge into the screwed-up student loan fiasco. Read… Student Enrollment Dropped 11% Since 2011, Student-Loan Balances Surged 74%. Why?