The stunning decline of men in the student headcount.

With college costs blowing through the roof, with “luxury student housing” and not so luxury “student housing” having become asset classes – including, of course, CMBS, now in rough waters – for global investors, with textbook publishers gouging students to the nth degree, and with the monetary value of higher education questioned in more and more corners, the inevitable happened once again: College enrollment dropped for the eighth year in a row. 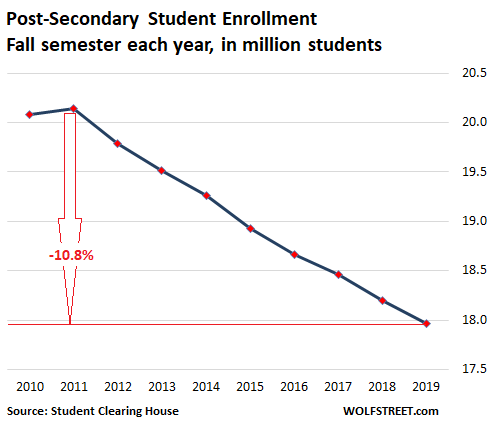 This is based on enrollment data submitted to the Student Clearing House by the schools. It does not include international students, which account for just under 5% of total student enrollment in the US. Duplicate headcounts – one student enrolled in two institutions – are removed from the data to eliminate double-counting. 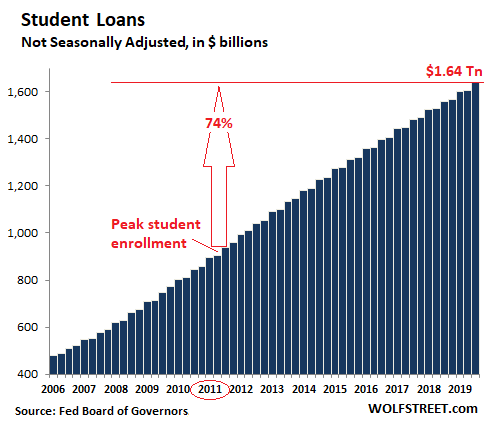 The overall decline in enrollment hasn’t been spread evenly across the board. After myriad scandals, lawsuits, government action, and government inaction, enrollment in for-profit four-year colleges has plunged by 54%, from 1.64 million student in the fall of 2010, as far back as the data series is available, to 750,000 now. 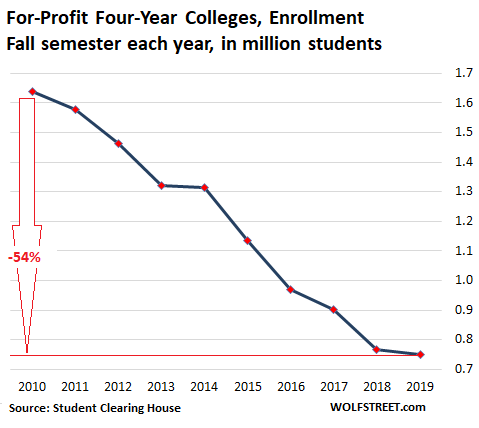 Enrollment at public two-year schools, such as junior colleges, has plunged by 22% since 2011, to 5.37 million (green line in the chart below).

But enrollment at private nonprofit four-year colleges has ticked up 3.9% since 2011. Yet, even these schools saw enrollment decline by 0.6% over the past year, to 3.84 million (brown line in the chart below).

And public four-year schools too had been hanging in there and the student headcount remains up 2.2% from 2011 though it too declined 1.2% over the past 12 months, to 7.82 million. At public schools, the peak was in 2016 with 8.1 million students (blue line): 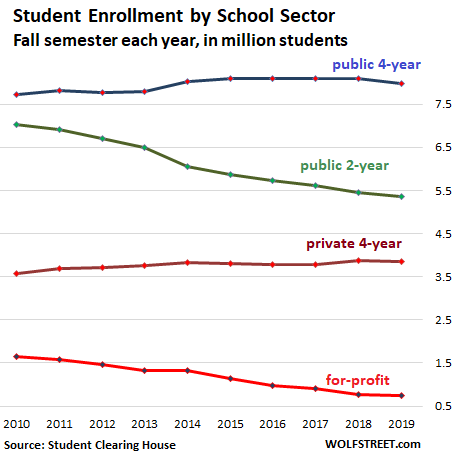 Where the heck are the men?

Women by far outnumbered men in total enrollment in the fall semester of 2019 with 10.63 million women enrolled and just 7.61 million men, meaning that overall there are now 40% more women in college than men:

Of the big four states, California had by far the most students, at 2.45 million. Over the 12-month period, enrollment ticked down by 0.8%, and over the three-year period by 2.7%.

In New York, at 1.04 million students, enrollment declined 1.8% year-over-year and fell 4.4% over the three-year period.

Enrollment in 35 states declined. Here are the states with largest enrollment declines by percentage change this year:

And in 15 states, enrollment increased. Here are the biggest gainers:

The overarching theme is the horrible expense of getting a higher education, as each layer element in the University-Corporate-Financial Complex extracts its pound of flesh, largely funded by parental sacrifices and by student loans, which are a mix of taxpayers funds when the loans default and students’ future sacrifices when the loans don’t default. The vision of a pile of student loans for years to come act as a discouragement to students who spend more than two minutes thinking about it.

But clearly, there are more factors at work. The collapse of enrollment in for-profit colleges is a result of numerous scandals and scams that left students with huge student loans and either no degree or with a degree that’s utterly worthless. It is likely that these for-profit schools marketed to people that would otherwise not have gone to university and enticed them with government-funded student loans.

The declining proportion of men among students has long been observed. That women flock to higher education is a great thing, but why did men bail on the system in such large numbers? This is subject to endless and wide-ranging discussions. One explanation that has been offered, and only a partial one, and only covering the past few years, is the relatively good job market where young men decided for forgo a higher education and instead enter the workforce after high school – and that makes sense in many cases, especially if it involves learning a trade.

Whatever the explanations may be, for most parents and students it has become a daunting task to pay for higher education and feed the University-Corporate-Financial Complex.

And so student loans have become the biggest problem area of consumer loans. Read… The State of the American Debt Slaves, Q3 2019

225 comments for “College Enrollment Skids for 8th Year in a Row in 2019, But Student Loans Skyrocket. What Gives?”