We got another one today, warning about all the right things. And then they do the opposite.

Here is what gets me. It happened again today. These Fed guys and gals are wandering about the land – armed with solid data – flailing their arms to warn about corporate debt that is at historic highs, and about credit spreads between certain types of junk-bond yields and investment-grade yields that are the tightest in history, where investors no longer effectively distinguish between higher and lower risk, and about commercial real estate with “cap rates” that have hit historic lows, indicating out-of-whack prices.

And then what do they do, these Fed guys and gals? Everything they can to make these excesses and imbalances even more excessive and imbalanced.

They cut rates three times, and bail out the repo market by throwing over $300 billion at these folks since September, rather than allowing some sort of price discovery to take place, and allowing in the process a hedge fund or two and a mortgage REIT or two, that have gotten addicted to borrowing at the ultra-low interest rates in the repo market, to experience withdrawal symptoms.

Today it was Dallas Fed President Robert Kaplan on Bloomberg TV that said all the right things and warned about the “excesses and imbalances,” and even named some of them – despite having been part of the cabal that cut rates three times and bailed out their crybaby cronies in the repo market in order to inflate those very excesses and imbalances even further.

“What gets my attention more is that single-B and double-B credit spreads are so tight, triple-B spread are very tight,” he said.

How tight are they?

The average yield of BBB-rated bonds (with “BBB-” being the very bottom of investment grade) was 3.23% as of Monday at the close. The average yield of BB-rated bonds (BB+ being the top end of “junk”) was 3.72%, according to the ICE BofAML US Effective Yield indices (my cheat sheet of corporate bond ratings by S&P, Moody’s, and Fitch). The difference between the two – the “spread” – was 49 basis points. Spreads in this range of 48 or 49 basis points are “tight” in the sense that until September this year, they’ve never been this tight before.

This means that the markets are only asking for minimal extra compensation to take quite a bit more risk. That’s how a bond bubble is defined, when credit risks don’t matter much anymore – meaning the risk of a company defaulting on its debts isn’t perceived as much of a risk anymore, even at the junk levels, where this risk is substantial.

In the past, the low points in credit spreads was followed by financial upheaval when these companies then did default and yields of riskier bonds spiked, as bond prices plunged, and credit spreads blew out, with bondholders often ending up as creditors in bankruptcy court. The same credit spread Kaplan pointed out: 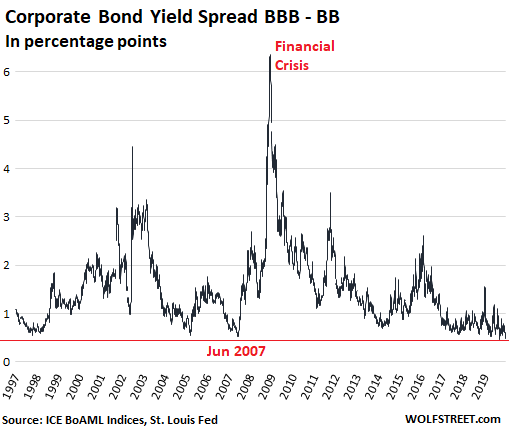 “If I see evidence that the market is sort of distinguishing between lower quality credits and better credits, I actually think that’s an encouraging sign,” Kaplan said. But the market is no longer doing that, now with spreads between BB and BBB at historic lows.

“My bigger worry is that you’ve got increasing PEs, you’ve got historically low cap rates, you’ve got very tight credit spreads,” he said, referring in one breath to:

So that’s his “bigger worry,” and he went about how vigilant he is about these excesses and imbalances:

“I’m just keeping a close eye on excesses and imbalances, particularly when corporate debt is historically high, [the amount outstanding of] triple-B debt has tripled, [the amount of] double-B and single-B debt has increased dramatically, and I’m just cognizant of that and watching it carefully to make sure we’re not creating excesses” – and then he corrected himself – “undue excesses and imbalances that are hard to deal with later.”

But what did they do instead? They cut rates three times and printed hundreds of billions of dollars to bail out their crybaby cronies in the repo market, and the “undue excessed and imbalances that are hard to deal with later” are further blowing out, making them even harder to deal with later.