The Biggest Share-Buyback Queens: When Will They Run Out of Juice?

Companies in the S&P 500 index bought back $176 billion of their own shares in the third quarter, down 13.7% from the third quarter last year, and down 21.1% from the record share-buyback mania in Q4 2018, according to the S&P Dow Jones Indices. But hey, since the beginning of 2012, these companies have bought back $4.37 trillion of their own shares, exceeding the magnitude of Germany’s annual GDP.

Think of what else these companies could have done with this money, instead of blowing it on share buybacks. They could have invested more in productive activities in the US and they could have raised the pay for their employees and gig workers so that they could recirculate this money in the economy.

And the biggest banks – we’ll get to them in a moment – could have used those funds to shore up their capital to get ready for the moment when the bubbles in corporate debt and commercial real estate, that the Fed is so worried about, come apart. 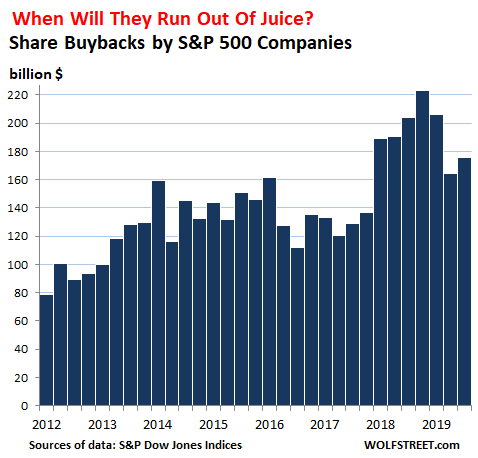 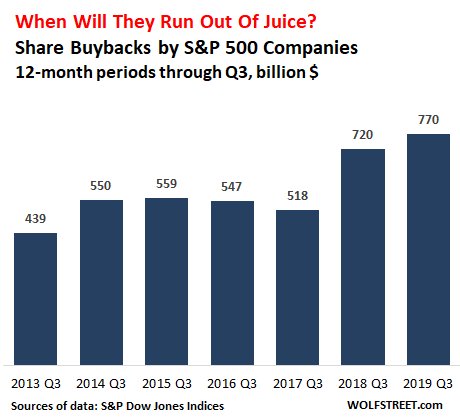 The 12-month total through Q3 was down 6.4% from $828 billion for the 12 months through Q1 2019 that had been heavily inspired by the corporate tax-law changes, which continue to heavily inspire these share buybacks.

What will the future bring? According to the report: “For Q4, the market is looking for another increase in buybacks, in the mid-single digit range, staying near the $190 billion level, well shy of the Q4 2018 record-setting $223 billion.”

The scheme is increasingly top-heavy.

Apple’s repurchase of $17.6 billion in the quarter – huge as it might seem – was only the eighth largest ever, and was 26% below Apple’s own record of $23.8 billion in Q1 this year. Of the top 10 record quarterly share-buyback amounts, nine are Apples, and one is Qualcomm’s.

The top nine share-buyback queens are all tech companies and banks. You have to go down to #10 to find the Dutch company, LyondellBasell, which is in the materials sector (chemicals), followed by Procter and Gamble, and some other non-tech and non-bank standouts (if your smartphone clips the six-column table, slide the table to the left):

Note in the table above that the top seven companies — four banks and three tech companies — bought back $56 billion of their own shares in Q3.

The four beloved banks – Bank of America, Wells Fargo, JPMorgan Chase, and Citibank, in that amazing order – among the top seven share-buyback queens, between them, bought back $86 billion of their own shares over the past 12 months, and thereby reduced their equity capital by $86 billion, which is what share buybacks do. But that $86 billion could have come in handy in the future when it’s time to deal with their losses on their loans to commercial real estate projects, to businesses, and to consumers. But those $86 billion have now disappeared.

When a company buys back its own shares, it pays cash for those shares, the shares get canceled and disappear, and the cash is gone, and “stockholder equity” – the company’s equity capital — on the balance sheet drops by that amount. That’s not a problem for a stellar balance sheet, such as Apple’s. But it’s a problem for many other companies that are too leveraged to begin with and that borrow to finance share buybacks. And it’s a problem for banks because it makes banks that much more vulnerable during the next crisis.

Financial engineering is what share buybacks are all about: They lower the share count, and so earnings are divided by a smaller number of shares, which produces a larger earnings-per-share figure, and a lower P/E ratio, when in fact, the actual profit of the company has not changed, and when it has to pay out billions of dollars in cash to accomplish this feat.

But beyond all, these share buybacks create a huge amount of buying pressure. Companies buying back their own shares are the relentless bid. They’re not trying to buy low and sell high. They’re trying to buy high, the higher the better, and then they’ll cancel the shares.

We got another one from the Fed, warning about all the right things. And then they do the opposite. Read…  Here’s What Gets Me about the Fed’s Warnings of “Excesses and Imbalances that Are Hard to Deal with Later”