Corporate America rerouted its supply chain to other countries.

The biggest standout in the US trade data released today by the Commerce Department is China (I combined the data for China and Hong Kong because a lot of merchandise is transshipped and/or invoiced via Hong Kong): The US trade deficit with China plunged by 18% from a record of $388 billion in 2018 to $320 billion in 2019, which was where it had been in 2016. 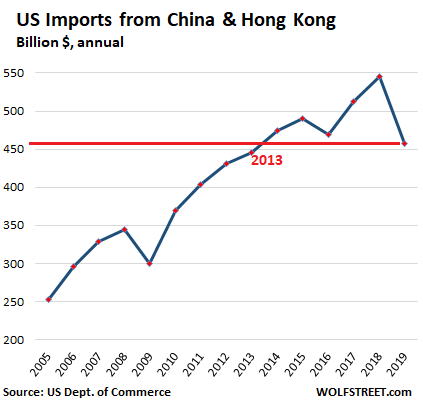 And the plunge of imports from China had an impact on the overall trade deficit — but not much since Corporate America rerouted its supply chains from China to other countries, and only a small portion was routed back to the US. 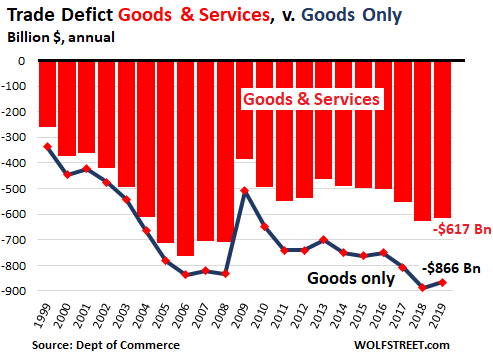 The Goods Deficit, by Country 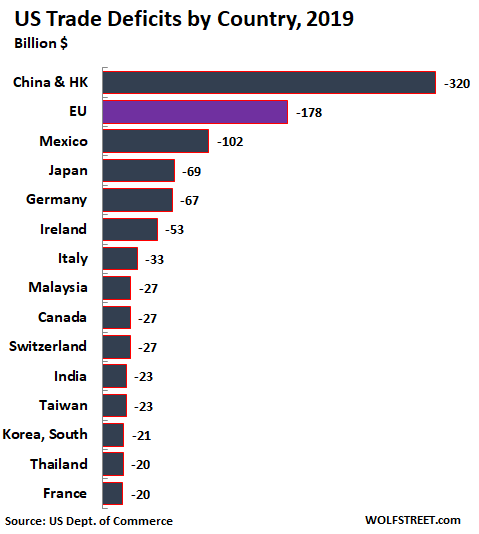 The opaque nature of international trade transactions – transshipments, trade invoicing, tax dodging, etc. – can produce peculiar results. For instance, the US had a trade surplus of $15 billion with Belgium and of $21 billion with the Netherlands, but not because they’re big end-users of US products, but because they have large ports that serve the EU markets. With the EU overall, the US has a huge trade deficit of $178 billion.

Part of the US pharmaceutical industry has set up their headquarters in Ireland via mergers with pharma companies that had already been headquartered in Ireland. This was done for tax-dodge purposes. In addition, Ireland has long had a vibrant pharma industry. It added up: in 2019, pharmaceutical products imports from Ireland rose to a record of $39 billion – about 63% of total imports from Ireland.

The chart below shows US imports (red) and exports (black), in order of the magnitude of the trade deficit with each country. As imports from China plunged, imports from the EU surged 5.5%. The trade bloc that doesn’t shy away from using tariffs to protect key industries and industrial policy to boost exports. It is now the largest source for US imports. 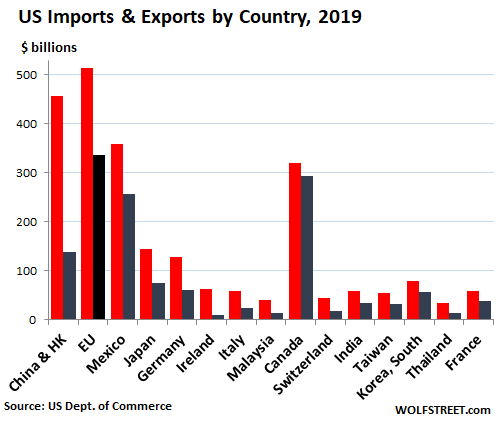 But the massive bilateral trade relationship with Canada in goods alone remains one of the most balanced for the US.

Much of the blame for the now slightly smaller but still gargantuan trade deficit falls on Corporate America that is taking advantage of US incentives to offshore production, and that is chasing after cheap labor and other cost savings available overseas.

94 comments for “US Imports from China Plunged Most Ever in 2019, Shifted to Other Countries, and the Goods Trade Deficit Improved Only a Tad from Worst Level Ever”