I try not to make predictions these days. But a few times I lapsed.

Normally, I report what is happening, based on numbers and charts. I analyze and try to make sense of our crazy times. It’s up to readers to project where this might be going. But a few times in 2019, I lapsed and made predictions. And here are six of them and how they’ve panned out so far, in no particular order, with my favorite one last:

September 1: In my podcast, THE WOLF STREET REPORT: Here’s What I’m Worried About, and It’s Not a Recession, I included a section with a warning about a snap-back in the 10-year Treasury yield. On August 28 and September 4, the 10-year yield closed at 1.47%. There was incessant talk of the 10-year yield going negative, as it already had done in several countries in Europe and Japan. The coming negative yields in the US were the most hyped theme at the time. I stuck my neck out and took a contrarian position: the 10-year yield would snap back.

This snap-back happened promptly, starting on September 5, leading to a snap-back of historic proportions, which I discussed on September 15, “Snapback Bloodletting in the Overripe Bond Market,” and said this:

“If this snapback follows the pattern of prior snapbacks, we’re looking at something like five months of rising 10-year yields, more gently than in the past eight days, with sharp ups and downs, but rising overall, with the yield going to something like 2.7%. And that may be the optimistic scenario.”

In the podcast, I also said that “peak negative-yield absurdity” had likely been at the end of August 2019, when over $17 trillion in bonds globally sported negative yields, and that yields were on the way up.

What we got so far:

In terms of the Treasury yield snap-back, we’re 3.5 months into this 5-month time frame. The 10-year yield has snapped back from 1.47% to 1.90% (as of Friday at the close). There are seven weeks left in the time frame. So there was a snap-back, but the 10-year yield is unlikely to hit 2.7% in seven weeks. I would say my prediction went in the right direction – in the sense that I didn’t shoot myself in the foot – but it didn’t hit the 2.7% target.

In terms of “peak negative-yield absurdity” having been at the end of August, with negative yields edging higher from there: Negative yielding bonds globally fell from $17 trillion at the end of August to about $11 trillion now, according to Bloomberg. The central bank of Sweden, one of the first to dive into the negative-yield absurdity, abandoned negative yields at its meeting in December, raising its policy rate to 0%, the first central bank ever to do so. I think I nailed this one.

June 6, 2019: I wrote, “Here’s My Prediction: If the Fed Doesn’t Cut Rates 3 or 4 Times by Dec 11, Markets Are Going to Crap.” The premise was that the federal funds futures market was pricing in a high probability of three to four rate cuts by the December meeting. My prediction wasn’t about the Fed cutting rates 3 or 4 times, but about the market’s reaction if it did not cut rates as many times – that any disappointment would bring turmoil.

What we got: The Fed did a lot more. It cut rates three times, bailed out the repo market, and started buying short-term Treasury bills, ballooning its holdings of Treasury securities at the fastest rate since the Financial Crisis. And stocks surged. So my prediction of market turmoil if the Fed refused to cut enough wasn’t tested, though it would have been interesting to see it tested.

#3: Downturn in shipments and in the goods sector.

January 16: In the article, Boom Fizzles: Shipments Fall for 1st Time Since Transportation Recession, I predicted, in line with the cyclicality of the transportation industry, that the shipments boom in 2018 was unwinding and said that “this industry is a useful barometer of the goods-based economy.” I used data from the Cass Freight Index.

What we got: Manufacturing and construction have entered a (mild) downturn this year, with year-over-year declines. And shipments have fallen every month on a year-over-year basis in 2019. This is the most recent chart of the Cass Freight Index: 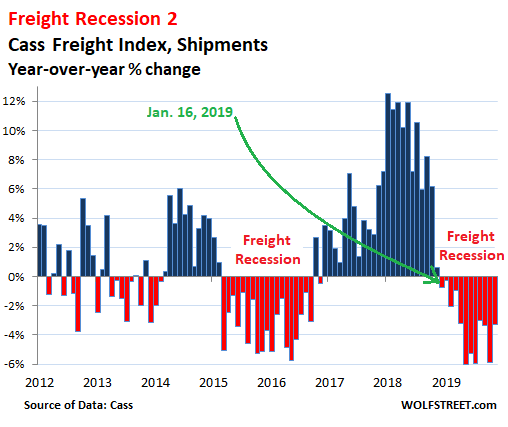 June 10: In the article, Was this the Very Minute of Peak-Insanity in IPO Stocks?, I discussed the crazy stock price of Beyond Meat [BYND] since its IPO, which at 9:59 a.m. reached $186.43, giving this company a market capitalization of $11 billion. Tthe company had just $40 million in quarterly sales of fake meat products with tons of competition. I said:

It is this kind of head-scratcher that forms the ideal candidate for pinpointing the very minute of peak-insanity. This is the craziest IPO in at least a decade. But this is not to say that something even crazier won’t come along, and everyone jumps on the bandwagon for a while to drive it up into the stratosphere before it comes unwound…

What we got: The stock went on to skyrocket to $239.71 six weeks later.  However, since the end of July, the stock has collapsed by 68% to $75.64; the super-hyped WeWork IPO was scuttled, with the company needing a bailout; and the shares of other unicorns with mega-IPOs, such as Lyft and Uber, having fallen on hard times. So clearly, 9:59 a.m. on June 10 was not Peak Unicorn Insanity, and my prediction was wrong. That moment occurred about six weeks later.

On January 5: In my article, Trucking Boom Ends, Next Phase in Cycle Starts, I discussed Class-8 truck orders for December 2018. Orders for these trucks had gone through a historic boom in 2018. But late in 2018, the boom began to fizzle, and I wrote: “It’s just the beginning of another phase in the cycle” – this next phase in the cycle being the decline.

What we got: Orders plunged through 2019. This is the most recent chart with orders for Class-8 trucks through November 2019: 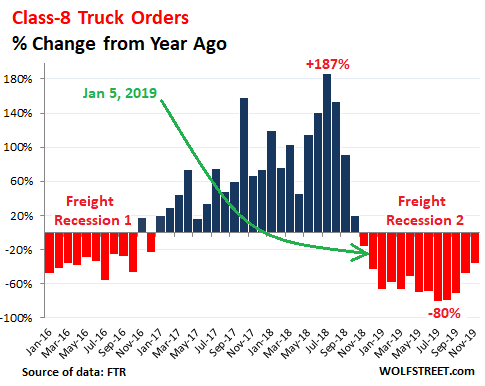 #6: “IPO Millionaires” will not drive up home prices in the Bay Area.

April 7: In my podcast — and on April 14, in the transcript — I predicted that the New York Times and the entire media circus were wrong in predicting that the multi-millionaires from the mega-IPOs of 2019 would further drive up the Housing Bubble in the San Francisco Bay Area. And I explained why they were wrong, how the dynamics worked, and why the last two times we had this situation, we got housing downturns. I was furious – you can hear it in the podcast – about this sort of real estate propaganda being republished in the media in a brain-dead manner.

What we got. The median price of single-family houses in the San Francisco Bay Area peaked in May 2018 and has since zigzagged lower. By November 2019, the median price had dropped 12% from that peak and had dropped 6% from April 2019, when this brouhaha erupted.