Stock market and corporate bond market are in la-la-land, pricing in an economic boom. They’re not seeing a rate-cut economy. So why would the Fed?

Granted, Wall Street always wants rate cuts, no matter what. But this is getting funny. The probability of three and even four rate cuts by December 11 are suddenly gaining the most favor in how the market are betting on 30-day Fed Fund futures. And the markets are now pricing in practically a zero-percent chance – currently a 2.2% chance up from a 0.8% chance yesterday – of no rate cut by December 11, the day of the Fed’s post-meeting announcement and press conference.

In other words, the market is betting there’s just a near-zero chance the Fed’s target for the federal funds rate will remain at the current range between 2.25% and 2.50% (chart via Investing.com): 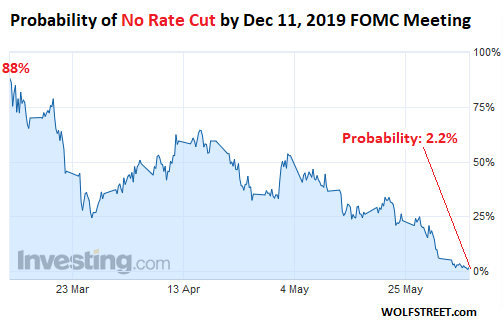 Markets were very wrong about this in 2018. In early 2018, the probabilities were stacked for only two rake hikes that year. But the Fed was able to “gradually” walk markets toward the expectations of four rate hikes, and other than yields adjusting upwardly there was no huge reaction in the market – until suddenly there was, starting in October, when the bottom fell out of the credit market and the stock market. This lasted through December 24, by which time the Fed had started to walk markets back from the brink.

The chance of only one rate cut by December has collapsed to only 13.6% at the moment, according to bets on 30-day Fed Fund futures. That probability had hit a low of 8.8% yesterday. One rate cut would bring the Fed’s target to a range between 2.0% and 2.25% (chart via Investing.com): 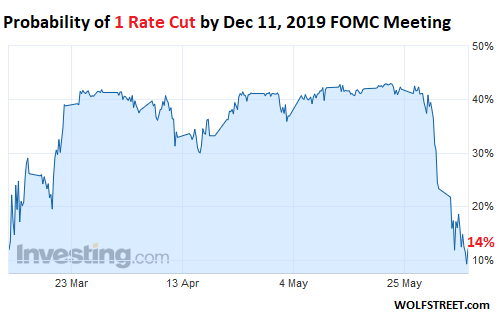 The bet on two rate cuts by December 11 is getting more popular. This would bring the Fed’s target down to a range between 1.75% and 2.00%. That probability had jumped to 36% by the end of May but has since ticked down to 34%, under pressure as three and four rate cuts are drawing more bets (chart via Investing.com): 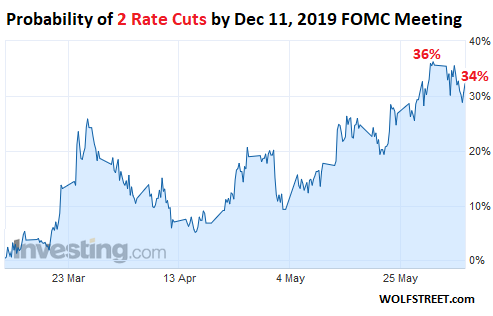 The probability of three rate cuts by December 11 has now soared to 34% at the moment, up from about 0% chance in early May. Three rate cuts would push down the Fed’s target for the federal funds rate to a range between 1.50% and 1.75% (chart via Investing.com): 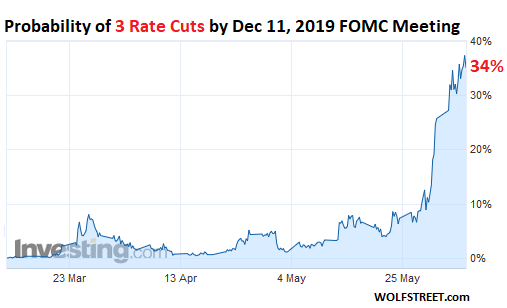 Ha, and even four rate cuts by December 11 – I mean, don’t laugh – has skyrocketed from nothing as recent as May 23, to 20% yesterday, though it has ticked down to 16% at the moment: 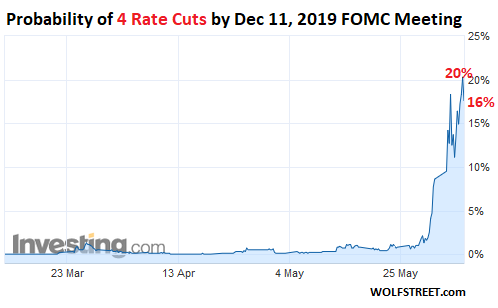 But here is the thing: The stock market is near its highs and is predicting boom times forevermore. During a downturn of the type that would induce the Fed to cut rates, corporate earnings collapse, revenues fall, PE ratios go to heck, and over-leveraged companies begin to default on their debts, which tends to wipe out shareholders. Economic downturns can be terrible for stocks that have been inflated like this and priced way beyond perfection. But there are no signs yet that the stock market, which is supposed to be forward-looking, is pricing in any of these risks. It’s gallivanting around in la-la-land.

The corporate credit market is sanguine. Junk bonds too are once again in la-la land. Junk-bond yields are low, given the risks. And yield spreads – the difference between junk bonds and Treasury securities – are still narrow though they have started to widen a tiny bit, showing that the corporate bond markets, like the stock market, is seeing an endless boom. Junk bonds get hammered in a big way when the economy turns south because in a downturn these over-leveraged cashflow-negative companies are suddenly grappling with existential problems. But that’s not happening yet.

Unemployment claims are bouncing along multi-decade lows. The labor market is a heck of a lot better than it was and is the strongest in years. Manufacturing is still growing, if barely, and growth is slowing and might turn negative, but it’s only a small part of the US economy. Services, which dominate the US economy – finance and insurance, healthcare, professional services, information services, etc. – are growing at a decent clip.

Consumers are making more money and are spending more at a decent clip. Consumer confidence is high. Government spending is growing in leaps and bounds, which stimulates the economy too.

So neither stocks nor riskier bonds are seeing a recession. And yet a different end of the market – the one that bets on Treasury securities, Fed Fund futures, and the like, is betting on three or four rate cuts over the next six months.

Based on what? That pressure from the White House will trigger a political panic at the Fed? Could be. But it could also just be market delusion.

Some people are hanging their hat on “low inflation.” Inflation is ticking up again, but as painful as it already is for many people, it’s a little below the Fed’s 2% target as measured by core PCE (1.6%). So maybe the Fed should choose a different inflation measure. One step up might be core CPI (2.1%), in which case the Fed would already be above its target. But there is not a whole lot else to hang your hat on for rate cuts.

I’m not sure how this circus will turn out, but if those three or four rate cuts that are now increasingly being priced in and taken for granted in some parts of the market don’t materialize by December 11, 2019, and if the Fed can’t figure out in a New York minute how to walk markets back “gradually” from those expectations, you might want to fasten your seat belt.

95 comments for “Here’s My Prediction: If the Fed Doesn’t Cut Rates 3 or 4 Times by Dec 11, Markets Are Going to Crap”