Manufacturing in the biggest manufacturing countries, particularly those focused on exports, has hit various levels of malaise, ranging from slowing growth to panic-inducing decline, according to the manufacturing Purchasing Managers Indices for May released on Monday. The PMI data shows that in the US, manufacturing is growing more slowly, but it’s still growing, and so the US continues to be the cleanest dirty shirt in this bunch.

The US Manufacturing PMI released by the Institute of Supply Management for May, released this morning, showed that economic activity in the US manufacturing sector expanded in May, but at a slower rate. As with all these PMIs, a value over 50 indicates expansion, and the more the value is above 50, the faster the pace of expansion. A value below 50 indicates contraction. The ISM Manufacturing PMI for May ticked down to 52.1 (data via YCharts): 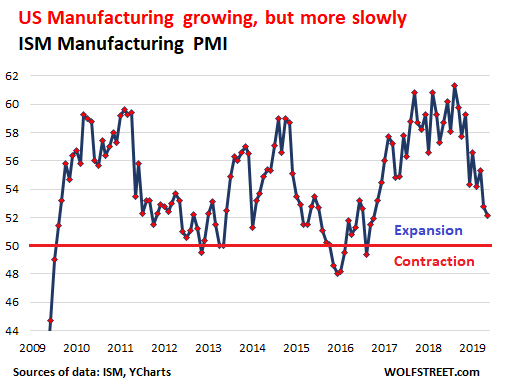 “Comments from the panel reflect continued expanding business strength, but at soft levels,” the report says. “Respondents expressed concern with the escalation in the U.S.-China trade standoff, but overall sentiment remained predominantly positive.”

Here are some key points:

Of the 18 manufacturing industries covered by the ISM PMI, 11 reported growth in May:

And six of the 18 industries reported contraction in May:

The US manufacturing sector is also covered by the IHS Markit US Manufacturing PMI, released this morning, for a slightly different point of view. It still showed growth (50.5) but the slowest growth since the Great Recession, “as output growth eased and new orders fell for the first time since August 2009.” 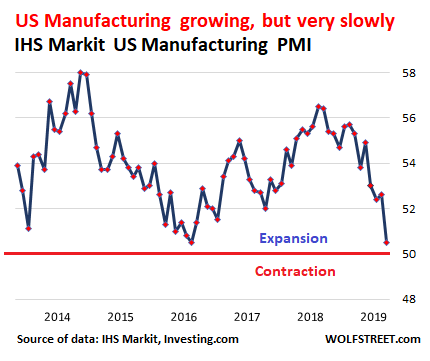 Employment rose, but at the slowest rate since March 2017, “amid tight labor market conditions.”

German manufacturers, gloomiest-and-doomiest of all.

The German economy’s legendary dependence on manufacturing for exports, and in particular its focus on the auto sector, has some drawbacks when the auto sector goes into decline globally, as is the case now, and exports in general deteriorate.

The IHS Markit/BME Germany Manufacturing PMI contracted further, to 44.3, the sharpest contraction among all manufacturing powerhouses.

However, Germany’s services PMI has been strong, and the divergence between services and manufacturing is stunning. The chart below shows the terrible condition of the manufacturing sector (red line) and strength in the service sector (blue line, IHS Markit Services PMI). Even in Germany, services (including healthcare, finance and insurance, information services such as data processing and telecoms, and professional services such as lawyering and architects) are by far the largest part of the economy. 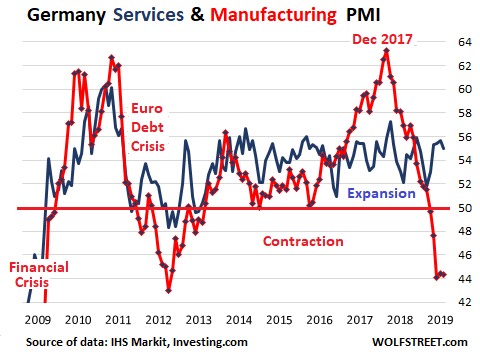 “Stronger growth in the consumer goods sector” helped ease the decline in manufacturing output for the second month in a row, also helped by “a slower decline at capital goods firms.” The sharpest contraction in production occurred at makers of intermediate goods.

Despite easing, the latest declines were sharp overall, with anecdotal evidence highlighting the effects of the slowdown in the car industry, the US-China trade conflict and customer destocking on sales.

And manufacturing employment is taking a hit. Manufacturers have shed workers for the third month in a row: “having accelerated from the modest rates of decline seen in March and April, the pace of job losses reached the quickest since January 2013.”

The 12-month outlook of these executives remained “downbeat,” on “lingering concerns towards trade conflicts, the auto sector slowdown, and Brexit.”

The IHS Markit Eurozone Manufacturing PMI contracted further, to 47.7 in May (from 47.9 in April), the fourth month in a row of contraction, and a six-year low. 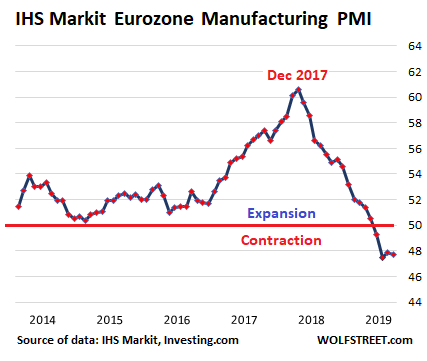 In terms of the Eurozone countries, some show strength in manufacturing. The weakest are Austria and Germany. Note which country has the fastest expanding manufacturing sector in the Eurozone:

The weakness in manufacturing continues to be “closely linked to deteriorating order books. Latest data showed an eighth successive monthly fall in new work received,” both from domestic and overseas customers, “as highlighted by another solid” contraction in new export orders.

A fourth successive monthly drop in output and further steep decline in new orders underscored how the sector remains in its toughest spell since 2013. Companies are tightening their belts, cutting back on spending and hiring. Input buying, inventories and employment are all now in decline as manufacturers worry about being exposed to a further downturn in demand.

The most commonly cited risks to the outlook were “trade wars, slumping demand in the auto sector, Brexit, and wider geopolitical uncertainty,” and they “all have the potential to derail any stabilization of the manufacturing sector.”

The Nikkei Japan Manufacturing PMI edged into contraction mode, to 49.8 in May (down from 50.2 in April): 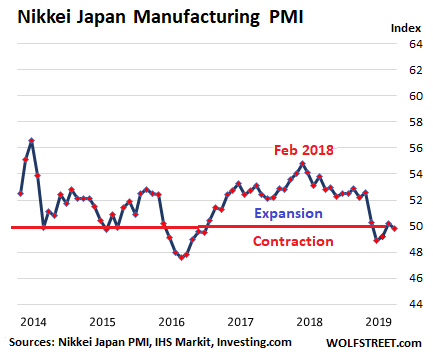 Employment increased, but at the slowest rate in two-and-a-half years.

New orders contracted for the fifth month in a row, “a reflection of weakness both domestically and overseas.” Export business fell for the sixth month in a row, “which firms attributed to challenging economic conditions at key trading partners such as China, as well as greater competition internationally.”

With appetite for Japanese goods dwindling, firms trimmed their inventory levels and scaled back buying purchasing activity. Stocks of both finished goods and inputs declined in May.

Having shown signs of a slight recovery in April, future output expectations turned pessimistic in May for the first time since November 2012, amid concern towards heightened trade tensions between the US and China, as well as the planned sales tax hike later this year.

The official China Manufacturing PMI, released by China’s National Bureau of Statistics, dipped back into contraction mode in May (49.4), after two months in expansion mode. Of particular significance is the sharp multi-month drop in export orders (red line with data going back to 2016): 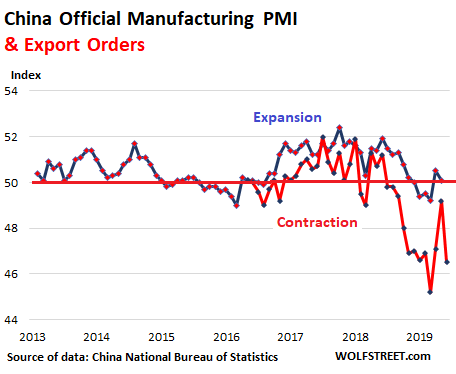 A slightly more upbeat version comes from the private sector Caixin China General Manufacturing PMI, which has been just barely in expansion mode for the third month in a row: 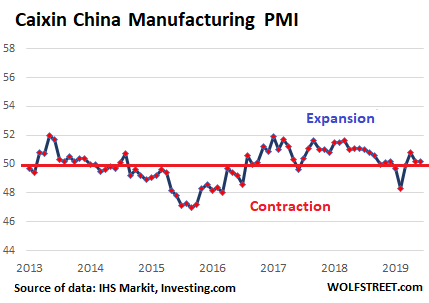 “Chinese manufacturing firms signaled a further slight improvement in overall operating conditions during May,” the report said. “Total new work rose at a faster pace, supported by a renewed increase in export sales, while production was broadly stable.” Some standouts:

The South Korean manufacturing sector is far smaller than the big four: China, the US, Germany, and Japan. But it’s the next largest in line. And these executives are a rather negative bunch, indicating that the manufacturing sector has been in decline for the majority of the time since 2012, according to the Nikkei South Korea Manufacturing PMI, which dipped backed into contraction mode in May (48.4): 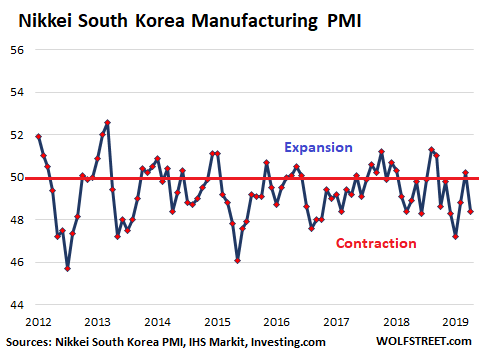 “Output was cut back as demand conditions became increasingly challenging, with domestic and export markets remaining fragile,” the report said. Some standouts:

In comparison with the travails experienced in the manufacturing powerhouses of Germany, China, Japan, and South Korea, that are all focused on exports, the US manufacturing sector for now remains the cleanest dirty shirt — still expanding, but with growth slowing.

The economy is in a “very good place,” says Trump’s man at the Fed. And the Fed’s favorite inflation measure ticks up. Read...  American Consumers Prop Up the Economy. Wall Street Clamors for Multiple Rate Cuts. Fed Blows Off Wall Street