Beyond prohibition, it’s an ag business with no barriers to entry.

The stocks of cannabis companies have been on a wild ride, with some observers comparing them to the crypto-craze. Canadian based Tilray (TLRY), which went public in July at $17 a share and is trading on the NASDAQ, was in the $20 range until late August, when it started flaring like a supernova. By September 19, it briefly reached $300 a share, up 1,660% from its IPO price two months earlier. The market cap approached 29 billion, making it more valuable than Clorox, though it had only $17 million in revenues in the first half of 2018 and generated a loss of $18 million.

Then it plunged for the rest of the week. Smaller gyrations continued into this week. Today it closed at $131.30, down 56% from its peak, but still up 672% from its IPO price, with a market cap of $7.6 billion. 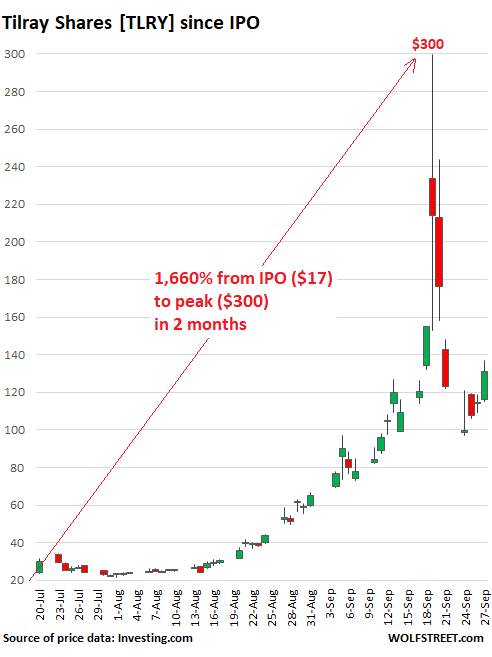 Tilray is the poster child for an entire sector resembling the last bubble based on a plant, the tulip bulb craze that nearly wrecked the economy of 17th century Holland.

On September 18, the US Drug Enforcement Administration approved importation of Tilray pot for federal testing in a lab as an anti-tremor drug. Florida Congressman Matt Gaetz immediately objected, wondering why not US pot? The answer is simple: It would have been illegal under US federal law.

In Canada, legal progress was slower but it was at the federal level: Tilray is legal at the Canadian federal level. US Feds can look the other way while states break federal law, but they can’t do it themselves.

The stock reacted as if Tilray was going to export pot to the vast US retail market. But it’s just for a lab test. So the euphoria over the US sale – amounting to perhaps a hundred pounds – was crazy. Also crazy is the idea that if Coca-Cola uses pot in beverages (very doubtful), it would be worth billions of dollars to Tilray.

Suppose Coke does use pot in a beverage. Why wouldn’t they just buy pot in the market, purchased in bulk as a commodity? We’ll get to the likely price shortly.

The next vision from Tilray’s CEO, talking to CNBC’s Jim Cramer, is the idea that pharmaceutical companies “need exposure” to this roller coaster so they can offer pot for cures (along with all other Canadian pot licenses, Tilray’s is medical and its logo says it is a pharmaceutical company).

Suppose US Big Pharma is convinced of a need for medical pot. It will surely be able to get federal permission to obtain it from US sources, which also happen to be much cheaper than anything Tilray can offer.

What makes Tilray a “pharmaceutical” company, and why does it deserve an appropriate valuation? What do other multi-billion-dollar pharma companies do that justifies their valuations?

At great expense (as they remind us) over a period of years, they employ scientists with doctorates to create new substances, new molecules, which they test in trials and patent. The patent is the barrier to entry and protects a very high price.

What substance has Tilray invented and what is the barrier to other providers? I would say, none and none.

Tilray should be valued as an agricultural company and at some point, if it wants to sell to the US retail market, it is going to have to come out from behind its “medical” window-dressing and fight, literally, in the field, because the future of the supply and price of pot will be found outdoors in fields and not indoor under lights. That future is unfolding in Oregon.

As of May, 2018, Oregon had a million pounds in inventory, largely carry-over from the 2017 outdoor crop. Prices had plunged 50% in one year but were still over $5 per gram retail. No one knows what price is needed to move the backlog.

The 2018 harvest is well underway by now, and it is too early to estimate its size. But the only thing that could appreciably lower the size of the harvest would be if many of the more than 1,000 licensed growers left the field, which seems unlikely.

Quite good pot (21% THC) can be grown outdoors. Adequate for smoking, it is indistinguishable from pot for any beverage application and an excellent feed-stock for the latest smoking rage, crystal THC.

Here in Nanaimo, British Columbia, where I live and where Tilray has a large facility, other growers are also caught in the downdraft.

I personally know one licensed indoor grower who can’t sell his crop and is leaving the business.

I also know an unlicensed outdoor (illegal) grower who is wondering whether to bother harvesting. He got C$700 a pound last year (for the 2016 crop) but has had no offers this year from any of Nanaimo’s 32 dispensaries.

None of this grief is due to Tilray, which sells only by direct mail order. The dispensaries are supplied by any of the 4,000-plus personal medical grow licenses, which are not supposed to be selling. The Canadian Feds are ignoring this like the US Feds ignore the state violations. But unlike the US, Canadian Feds promise change in Canadian law soon permitting anyone to grow a small number of plants indoors or outdoors.

One thing seems clear: as the prohibition recedes, the price of pot will be a function of the cost of production. No other psychoactive substance needs so little processing. Once the bud is trimmed, it just needs to be dried. Absent a prohibition, pot can’t be priced as though it were rare.

Some years ago, the Rand “think tank” produced a study on the cost of legal pot. It concluded $10 per pound for bud. Triple that to make their estimate current ($30), double it to be conservative ($60), and double to again ($120) to give pot bulls the benefit of the doubt. Add 25% for profit, and we are in the area of $150 per pound.

If true, a dollar a gram at retail would seem feasible. Coincidentally or not, this is the government-controlled price in Uruguay, where a friend just bought some – quality unknown.

Does the future of pot production belong to Big Pharma, Big Ag, or maybe just individuals growing for themselves or to sell to Big Ag? In any event, Tilray will have to be much more profitable to justify recent valuations. By Nick Kelly, a WOLF STREET commenter.

47 comments for “These People Are Nuts: Pot Stocks Soar as Pot Prices Plummet”