But where the heck is the “U-Turn?”

May was the first month of the Fed’s new plan of slowing QT and altering it in other ways. And suddenly, everything is in flux: It shed Treasury securities at a slowing pace, as announced, but for the first time – and not part of the pre-announced plan for May – the Fed replaced some longer-term Treasuries with short-term Treasury bills, thus doing the opposite of its QE-era “Operation Twist.” And it shed the most Mortgage Backed Securities since the QE unwind started.

Total assets fell by $42 billion in May, as of the balance sheet for the week ended June 5, released this afternoon. This was the balance-sheet week that included May 31, the date when Treasuries rolled off. This drop reduced the assets to $3,848 billion, the lowest since October 2013. Since the beginning of the “balance sheet normalization” process, the Fed has shed $613 billion. Since peak-QE in January 2015, the Fed has shed $669 billion: 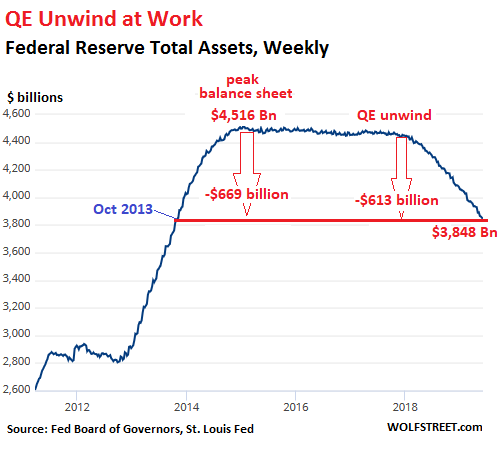 According to the Fed’s new regime, announced in March, the maximum amount of Treasury securities that would be allowed to roll off when they mature would be cut in half, to $15 billion in May. And that’s about what we got.

The Fed doesn’t sell its Treasury securities outright. Instead, when they mature at mid-month or at the end of the month, it just doesn’t replace them.

On May 15, three issues of Treasuries matured, and on May 31, three more issues matured, for a total of about $58 billion. The Treasury Department redeemed these securities and paid the Fed for them. And Fed reinvested most of this money into a new batch of Treasury securities but allowed the remainder to roll off without replacement. The balance of Treasuries dropped by $14 billion, to $2,110 billion, the lowest since October 2013: 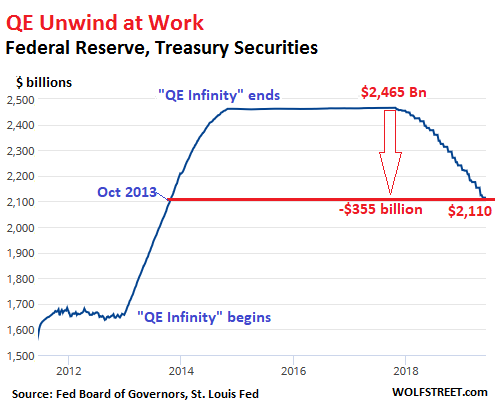 Here is a new thingy:

The Fed acquired short-term Treasury bills for the first time in years, only small amounts. They crop up on its May-dated weekly balance sheets for the first time. In the current balance sheet, it lists $50 million, which will mature in mid-June. So this appears to be the first baby-step of what it said was still in the discussion stage and would be implemented after September: Replacing long maturities with short-term bills to bring down the average maturity of its portfolio. This is the reverse of Operation Twist of the QE era, when it replaced its short-term T-Bills with longer-term T-notes and T-Bonds to push down long-term yields.

The residential MBS on the Fed’s balance sheet were issued and guaranteed by Fannie Mae, Freddie Mac, and Ginnie Mae. Holders of MBS receive pass-through principal payments as the underlying mortgages are paid down or are paid off. The remaining principal is paid off at maturity. The runoff is nearly all due to pass-through principal payments because 95% of the MBS on the Fed’s balance sheet mature in over 10 years.

These pass-through principal payments are erratic and depend to some extent on the movement of mortgage interest rates: Falling rates encourage homeowners to refinance their mortgages, and after these old mortgages are paid off by the homeowner, the amounts are passed through to the holders of MBS. But in times of rising interest rates, refis slow down, and pass-through principal payments dry up.

Mortgage rates have been falling since last November, and mortgage refi applications, after hitting a decade-low in December, have surged by over 50% since then, according to the Mortgage Bankers Association. And the Fed took advantage of this flow of pass-through principal payments.

In May, the balance of MBS fell by $20 billion to $1,555 billion. Under the new regime through September, the runoff of MBS is set to continue as before, with a cap of “up to” $20 billion a month. Until May, the cap of $20 billion was never reached. In April, the MBS runoff topped out at $17 billion. The MBS runoff in May, at $20 billion, was the largest so far: 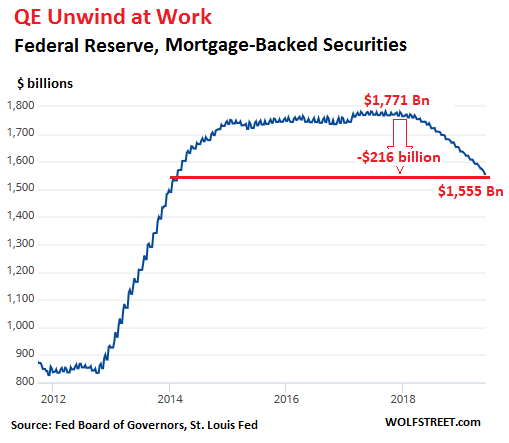 Changes on the asset side of the Fed’s balance sheet – the $42-billion drop in May – also reflect the Fed’s other activities. But in terms of Treasuries and MBS, the Fed shed $35 billion in May. While it slowed down the Treasury runoff, as announced, it is clearly intent on getting rid of its MBS as fast as possible under its announced limits. And in addition, it also now implemented its first baby-step of bringing T-Bills back on its balance sheet, at the expense of longer-term securities.

Stock market and corporate bond market are in la-la-land, pricing in an economic boom. They’re not seeing a rate-cut economy. So why would the Fed? Read…  Here’s My Prediction: If the Fed Doesn’t Cut Rates 3 or 4 Times by Dec 11, Markets Are Going to Crap

56 comments for “Fed Balance Sheet Drops by $42 Billion in May, Sheds MBS at Fastest Pace, Starts the Reverse of Operation Twist”