The Fed’s balance sheet would be “substantially smaller” after the Fed gets done with its QE unwind, Fed Chairman Jerome Powell said on Thursday. How far the Fed might go in shedding assets is a red-hot topic right now that causes a lot of fretting and howling on Wall Street and in the White House. Here is what Powell said at the Economic Club of Washington, D.C – and then we get into the dynamics and charts of what he described and what “substantially smaller” might mean:

“Yes, we wanted to have the balance sheet return to a more normal level, which is a level no larger than it needs to be for us to conduct monetary policy,” he said. When asked what level that would be, he said:

“Don’t know the exact level. That would depend really on the public’s appetite for our liabilities, specifically currency. To us, that’s a liability. And the public has a large appetite for currency….”

“So it will be substantially smaller than it is now,” he said. “But nowhere near what it was before, and the reason is, currency was well less than $1 trillion before quantitative easing started and now is moving up toward $2 trillion.”

The Treasury Department produces the bills and coins. But the Fed manages the amounts in circulation via the banking system. Currency in circulation grows when there is a lot of demand for paper-dollar cash. There must always be enough paper-dollars in the banking system to satisfy the demand by customers for the physical dollars. And as Powell pointed out, “the public has a large appetite for currency.”

This demand for dollars is on a global basis. People globally are hoarding this stuff, and some countries use it as their primary currency, or as an alternate currency alongside their own trashed currency. When the Financial Crisis set in, folks started hoarding more of it, and demand increased at a steeper rate.

This chart shows currency in circulation. The amount more than doubled from $830 billion in February 2008 to $1.72 trillion now: 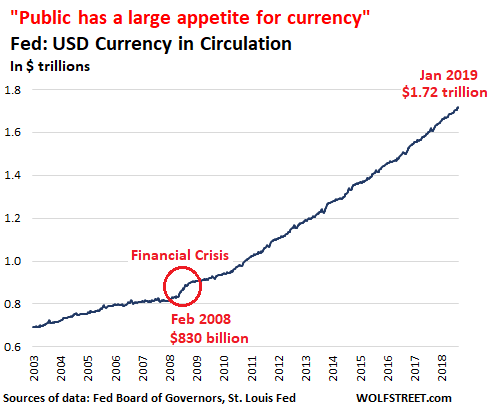 Note the steeper curve during the Financial Crisis — and afterwards. I also went to the bank and withdrew some extra paper-dollars and stashed them away, just in case. And this, as it was done by hundreds of millions of people around the globe, increased demand for those paper-dollars.

Currency in Circulation and the Fed’s assets

But banks don’t get paper-dollars for free. They have to trade for them with the Fed dollar-for-dollar. So when currency is put into circulation via the banking system, the Fed records the currency as a liability, and what the Fed gets in return from the banking system dollar-for-dollar becomes an asset on the Fed’s balance sheet. This asset is mostly Treasury securities.

The chart below shows the relationship between currency in circulation (black line) and total assets (red line). Until QE started, they grew in parallel, the red line slightly above the black line. But then QE blew the whole equation apart: 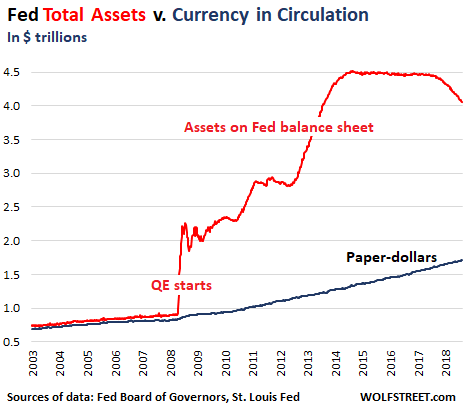 Another way of looking at this is via the percent difference between total balance sheet assets and currency in circulation: 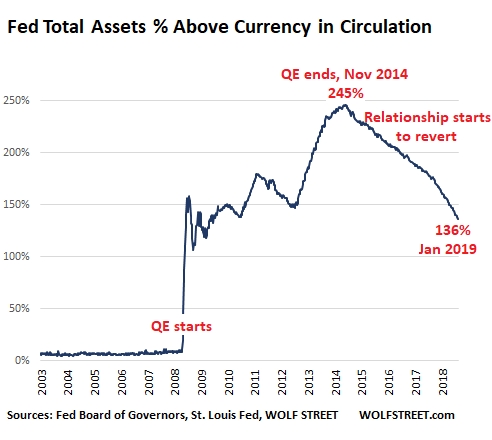 By not adding more assets after QE had ended in late 2014, the Fed allowed the relationship between assets and currency to start reverting, or — to put words into the Fed’s mouth – “gradually normalizing.” In other words, from this perspective, the QE unwind essentially started in November 2014.

Even if, hypothetically, the QE unwind stops at this very moment, and the balance sheet assets remain level, eventually – perhaps in 20 years – the old relationship would be reestablished. But the QE unwind speeds up that process by a lot.

The relationship between currency and assets is key. This is what Powell referred to when he said that the level of assets “would depend really on the public’s appetite for our liabilities, specifically currency.”

And so, he said, the balance sheet “will be substantially smaller than it is now,” but given the surge in currency in circulation, it will be “nowhere near what it was before.”

At the demand rate for currency over the past 10 years, there will be about $2.2 trillion of currency in circulation in 5 years. That means that the balance sheet, if it is going to be just 10% larger than currency in circulation, would need to be near $2.4 trillion in order for the old pre-QE relationship to be re-established. This means, the Fed would have to shed an additional $1.6 trillion in assets over the next five years.

And it has already shed over $400 billion since the QE unwind started. Read…  Fed’s Balance Sheet Reduction Reaches $402 Billion

67 comments for “Fed’s Powell: Balance Sheet to be “Substantially Smaller.” How Small? He Gave Big Clues. My Dive into the Dynamics & Charts”