Normally, this would be ironic: The Fed doesn’t need to borrow; it creates money when it needs some. So it wouldn’t pay interest. But these are not normal times.

The Fed earns interest income on the huge pile of securities it holds. After covering operating expenses, interest expenses, and some other items, it is required to remit the rest to the Treasury Department – to the taxpayer.

Therefore, the amounts in interest expense the Fed pays the banks on their “Excess Reserves” and “Required Reserves” comes out of the taxpayer’s pocket and its transferred to the banks to become bank profits, and thereby bank executive bonuses and stock holder dividends, funded by the dear taxpayers. And this amount was huge in 2018: $38.5 billion!

Here is what the Fed reported:

Interest income: $112.3 billion. This is the amount the Fed received in interest payments on the securities it holds, including those acquired as part of QE: Treasury securities, mortgage-backed securities (MBS), and government-sponsored enterprise (GSE) debt securities (the latter is now almost nothing in the grander scheme of things, just $2.4 billion, and down from $169 billion peak in 2010).

The chart below shows the Fed’s combined holdings of Treasury securities, MBS, and GSE debt securities. The QE unwind (which started in October 2017) whittled down the balance of those three types of securities by $392 billion. 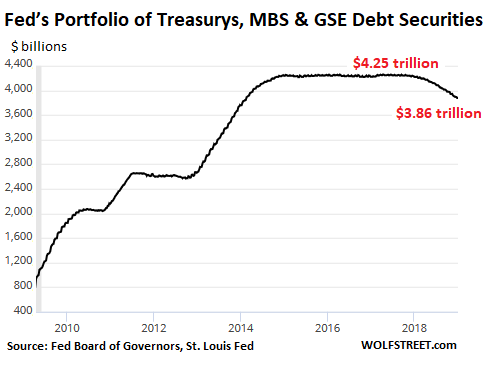 Normally, these line items would be ironic because, obviously, the Fed doesn’t need to borrow money – it creates money when it needs some – and therefore, it wouldn’t need to pay interest. But these are not normal times.

The $38.5 billion: This is what the Fed paid US banks and foreign banks in the US on their Excess Reserves and Required Reserves on deposit at the Fed. 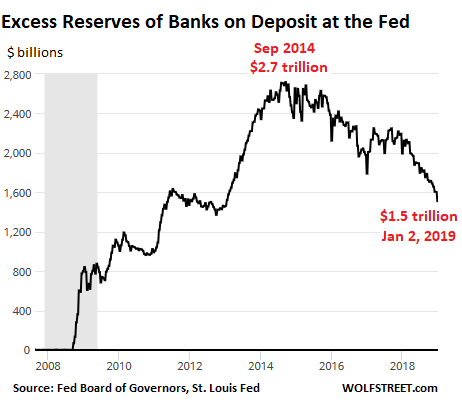 The interest rate that the Fed paid on both types of reserves was 1.5% at the beginning of 2018, and was raised four times with each rate hike during the year, but less than the 1/4-point hikes of the Fed’s target range for the federal funds rate. At its December meeting, the Fed raised this rate to 2.4%. 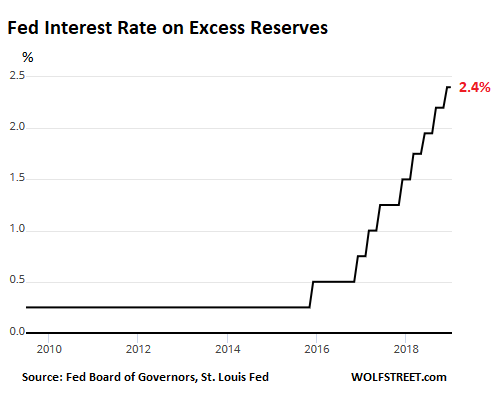 So the balances of Excess Reserves have plunged, and the interest rate the Fed pays on those reserve balances has jumped. Both factors combined caused the Fed to pay a record $38.5 billion to US banks and foreign banks in the US. Here is the sordid history of this annual wealth transfer from taxpayers to the banks via the Fed: 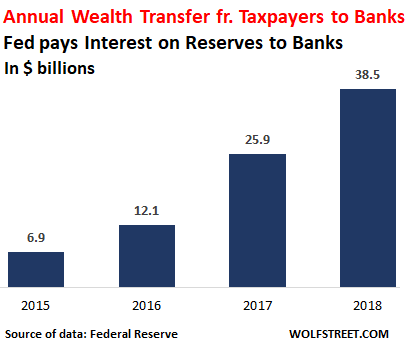 The $4.6 billion: This is what the Fed paid in interest expense on securities that it sold under agreement to repurchase. This too came out of taxpayer’s pocket.

The total the Fed sent to banks and others in interest that came out of taxpayers’ pocket amounted to a combined wealth transfer in 2018 of $43.1 billion.

The Fed, including the 12 regional Federal Reserve Banks, had operating expenses of $4.3 billion in 2018. They also made $444 million in income from services. And there were some additional expenses:

The thing that is always fun but minor, given the huge amounts the Fed pays the banks on Excess Reserves: the 12 regional Federal Reserve Banks, which are owned by the largest financial firms in their districts, paid statutory dividends of $1 billion in 2018 to their shareholders.

So what does this leave for the Taxpayer?

The Fed remitted most of the remainder – the difference between its interest income and its expenses plus some other items — $65.4 billion in total, to the US Treasury Department, and hence finally the stiffed taxpayer. It was the lowest amount since 2009 (chart via the Fed): 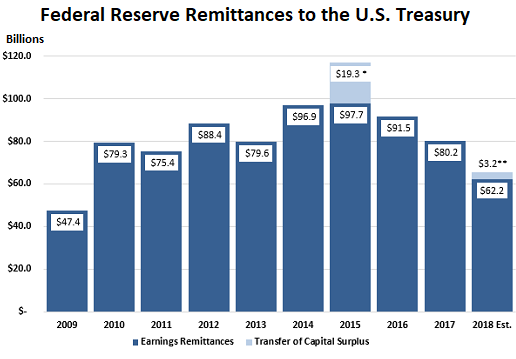 These are preliminary results, the Fed said. Final results will be released in March after the annual audit of the Fed’s financial statements.

But all bets are off if something big breaks. Read…  Rally in Stocks Takes Heat Off Fed, Now They Talk Rate Hikes Again, Market Expectation of a Rate Hike Spikes