But all bets are off if something big breaks.

Since the low point on Christmas Eve, the S&P 500 has rallied 9.9%, nearly half of which on December 26. This was helped along by the word “patient,” used by Fed Chairman Jerome Powell, other Fed governors, and the FOMC minutes. The effect: Wall Street has stopped haranguing the Fed about the rate hikes and the QE unwind, and the White House has stopped leaking titillating tidbits about President Trump wanting to fire Powell. The dust is settling.

And now the Fed governors are fanning out to talk about rate hikes again, adding the soothing terms as “patience” or “wait,” and disagreeing with each other, as they usually do in public to keep the debate going on how many rate hikes will eventually happen.

In early 2018, the markets expected two rate hikes for that year. Fed governors gave speeches throughout the year that gradually removed the disagreement over how many rate hikes, and in the end, they voted unanimously for four.

When it comes to rake hikes that are more than a couple of months away, the market’s expectations are way off. Markets don’t want rate hikes and bet against them until the rate hikes move closer into view, then gradually they climb on board.

At the beginning of January, markets put a 2.5% chance – in essence nil – for one rate hike by the end of 2019. But over the past three days, this probability spiked to 27.6% by this morning and tapered off some during the day (chart via Investing.com, based on 30-Day Fed Fund futures prices). 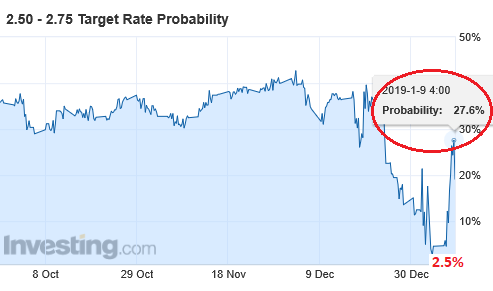 In the dot-plot at the December meeting, FOMC members had a wide-ranging view of how many rate hikes they saw in 2019, but the median projection was for two rate hikes.

The new twist: the words “patient” and “wait” are cropping up everywhere. There’s now a consensus that the dust would need to settle and markets would need to get used to current monetary policy, which would still need to work its way into the financial markets and tighten financial conditions further, which will take time, before the next steps will be taken.

So four Fed governors communicated with the public about rates today. One thing they agreed on is the strength of the US economy in 2018; and they expect solid but slightly less growth in 2019. Here are a few things that these appearances have confirmed:

So here we go.

Atlanta Fed President Raphael Bostic, a voting member on the FOMC this year, used the word “patient” three times in his speech today. Then he vaguely laid the groundwork for a possible quarter-point hike to bring policy, which has now “come close to achieving a neutral policy stance” to an actual neutral stance, but for now sees no reason to take it beyond neutral.

He said he expects “another year of solid growth,” though “bit slower than in 2018 as the temporary effects from fiscal stimulus and tax reform begin to fade”:

“This is an economy that, by all appearances, ought to be able to stand on its own, without much support, or accommodation, from monetary policy.”

“And it is largely from this standpoint that I supported the 25-basis-point increase in the federal funds rate at the December FOMC meeting. With this move, I think the Committee has likely come close to achieving a neutral policy stance—one that is neither providing accommodation nor is being restrictive and attempting to actively slow the economy.”

He views the “market turmoil”  as “a symptom of the various concerns and uncertainties surrounding the outlook. These include slowing global growth, uncertain trade policy, worries over the trajectory of growth domestically, and concern regarding the expected stance of monetary policy.”

And he too, along with other Fed governors, including Powell, pointed at the conflicting messages from the “recent upheaval in financial markets” and solid economic data:

So grassroots intelligence from Main Street and messages from Wall Street indicate heightened uncertainty and concern about the economy. But the aggregate economic data continue to paint a robust picture. What is a policymaker to conclude from these mixed signals?

To me, the appropriate response is to be patient in adjusting the stance of policy and to wait for greater clarity about the direction of the economy and the risks to the outlook.

Should conditions play out along my baseline outlook, I see little need to engage in restrictive monetary policy and push the federal funds rate above a neutral stance.

Voila, let the dust settle for a few months, then maybe raise the rate to neutral and wait.

Chicago Fed President Charles Evans, a voting member of the FOMC this year, used the word “wait” in his speech today, as in: “we have good capacity to wait.” Then he laid out his reasons for up to three rate hikes, starting somewhere mid-year.

He is gung-ho about the economy, sees “solid fundamentals,” and expects “growth coming in somewhat above potential.” But it just won’t be quite as strong as 2018. “Nonetheless, such growth in 2019 would come with healthy gains in household and business spending, keep the unemployment rate low, and have wages rising at a decent clip.”

He adds the unusual observation that financial markets “have been, well, shall we say, busy”:

“Investors seem to be concerned about these international and fiscal risks, the sustainability of corporate earnings growth in an environment with such risks, and the possibility of the Fed removing policy accommodation too aggressively.”

And he noted that the financial markets’ reactions combined “amount to a tightening in financial conditions.”

“If the downside risks dissipate and the fundamentals continue to be strong, I expect that eventually the fed funds rate will rise a touch above its neutral level — say, up to a range between 3 and 3-1/4 percent.”

The Fed would have to hike its target range three times a quarter point to bring the range to Evans’ projection. This would be a slight tightening, given that the median neutral level at the December meeting was 2.75%.

But, maybe not in the first half:

“Because inflation is not showing any meaningful sign of heading above 2 percent in a way that would be inconsistent with our symmetric inflation objective, I feel we have good capacity to wait and carefully take stock of the incoming data and other developments.”

“I think developments in the first half of 2019 will be very important for making this assessment of our future monetary policy actions.”

St. Louis Fed President James Bullard, a voting member on the FOMC in 2019, confirmed once again in an interview published today that he is always dead-set against any kind of rate hike, has been from day one, and will be for all days to come. He confirms this every time anyone listens to him. So, nothing has changed – except this year he gets to vote.

Boston Fed President Eric Rosengren, a voting member on the FOMC in 2019, also highlighted in a speech today the conflicting messages of the economic data and the financial markets:

“At least to date, the economic data and the outlook of forecasters have both been more optimistic than recent financial market movements might indicate.”

He suspects financial market sentiment “may have become unduly pessimistic.” His own view is for growth in 2019 “solid enough to tighten the U.S. labor market somewhat.” But given the disconnect between market volatility and economic forecasts, he said, “I believe we can wait for greater clarity before adjusting policy.” And his “current expectation is that the more optimistic view will prevail, with economic outcomes consistent with the more upbeat forecasts.”

So, talking up the markets, being patient in the first half to let markets adjust to the current monetary policy, and putting a rate hike or two on the front burner in the second half seems to be the theme. But all bets are off if something big breaks.

Wall Street’s hope for a dovish Fed may not be entirely fulfilled, it seems. Read… My “Fed Hawk-O-Meter” Speaks