But there won’t be an adjustment for the Fed-favored “core PCE” price index that will come out before the next Fed meeting.

Let’s just start with inflation in services today because nearly two-thirds of consumer spending ends up in services, so this is the biggie. And some extra-special stuff happened in the CPI for services in October. What would come today was discussed over the past weeks in the Wall Street Journal and elsewhere, and it wasn’t a surprise: a massive mega-adjustment by the Bureau of Labor Statistics in the CPI for health insurance. And today it came. 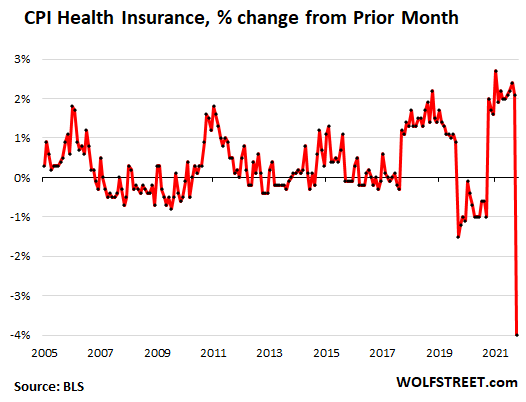 The CPI for health insurance accounts for 0.9% in overall CPI and for 1.1% in the Core CPI. And the plunge today pushed down the overall index, and even more the core CPI and the services CPI.

Inflation in health insurance is difficult to figure because numerous factors change, not just the premium but also co-pays, deductibles, out-of-pocket maximums, what is covered and what isn’t covered, etc., and there are all kinds of insurance plans out there.

So the BLS uses a different method to estimate price changes, the “retained earnings method,” which the BLS explains here, and once a year or so, it has to adjust the index as more data become available.

Normally the annual adjustment isn’t such a huge deal, but this time, the adjustment was gigantic.

Year-over-year, the health insurance CPI was still up 20.6%, but the year-over-year increases will be slashed for the next 11 months. It was also negative from month-to-month from August 2020 through August 2021.

This chart shows the index value, which will continue to drop for another 11 months, until the next adjustment: 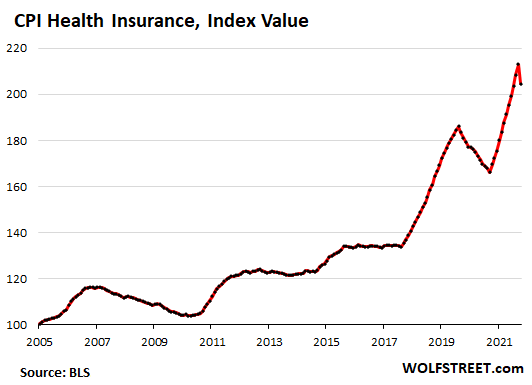 But no adjustment for the Fed’s favored “core PCE” index.

It’s the lowest lowball index that the government produces, and we may pooh-pooh it, but it’s the most important inflation index for the Fed, and this “core PCE” price index won’t be adjusted in October. It will be released on December 1, just ahead of the Fed’s next meeting.

The CPI for services jumped by 0.4% in October from September, less steep than the 0.8% spike in the prior month, thanks to the massive adjustment to health insurance CPI.

In this chart of month-to-month changes of the CPI for services, note the large ups and downs from month to month, which is why you cannot conclude anything by just looking at one month: 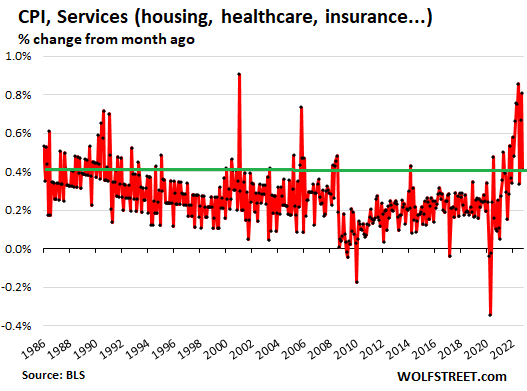 Without the health insurance adjustment, the year-over-year spike in October would have set a new four-decade record. 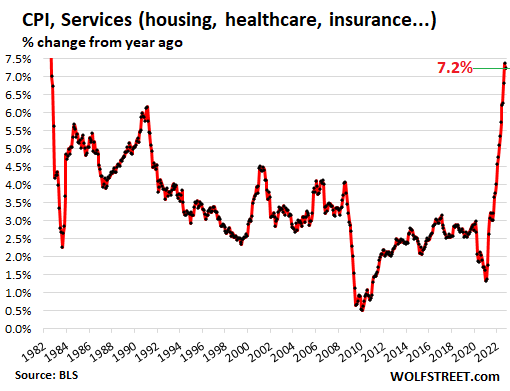 The table shows the major services CPI categories in order of the month-to-month change, from the biggest increase (hotels & motels) to the biggest decline (health insurance). More on the housing CPIs Rent and Owner’s Equivalent of rent in a moment:

The core CPI, which excludes the volatile food and energy products, rose 0.3% in October from September, less bad than the 0.6% spike in the prior month, thanks in part to the massive insurance adjustment.

Year-over-year, core CPI jumped 6.3%, along with several other months this year, the worst since 1982. 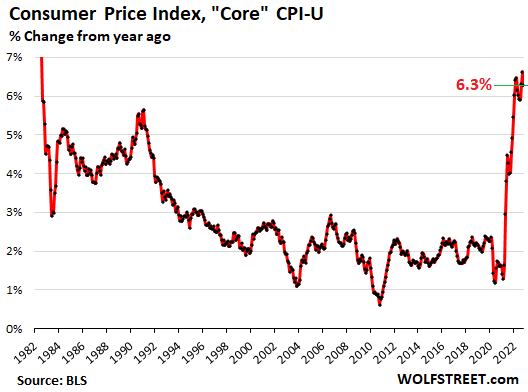 The all-items CPI rose 0.4% in October from September, same as in the prior month, and by 7.7% year-over-year, a deceleration from October. 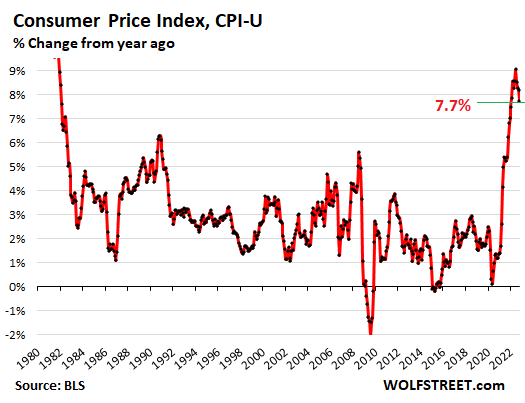 The CPI for “food at home” – food bought at stores and markets – jumped by 0.6% in October from September. Prices in some categories that had spiked wildly are now dipping on a month-to-month basis, such as beef. But others, such as eggs, are re-spiking. The game of inflation Whac-A-Mole

Year-over-year, the CPI for food at home jumped by 10.9%, less terrible than the 13% jump in September.

The CPI for “Food away from home”– restaurants, vending machines, cafeterias, sandwich shops, etc. – spiked by 0.9% in October from September, and by 8.6% year-over-year, the worst since 1981. 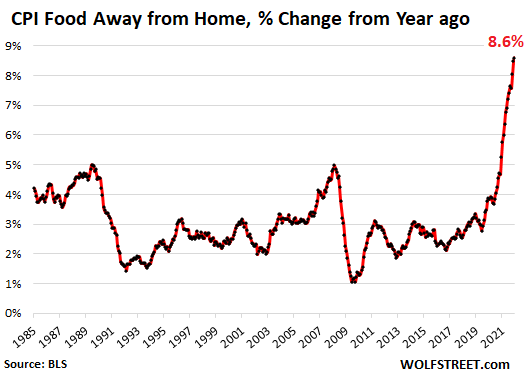 After the decline in September, the CPI for energy products and services rose 1.8% in October from September, on rising gasoline prices and spiking heating oil prices. Year-over-year, the energy CPI jumped 17.6%:

The CPI for “rent of shelter,” which accounts for 32.3% of total CPI, tracks housing costs as a service, not as an investment asset. Its major components:

“Rent of primary residence” (accounts for 7.4% of total CPI) jumped by 0.7% in October from September. Year-over-year, it jumped by 7.5%, the highest since 1982 (red in the chart below). It tracks actual rents paid by a large panel of tenants, including in rent-controlled apartments.

Other rent indices, including Zillow’s rent index, are based on “asking rents,” which are the advertised rents that landlords want to charge future tenants.

“Owner’s equivalent rent of residences” (accounts for 24.0% of total CPI) jumped by 0.6% for the month and by 6.9% year-over-year (green line). It tracks the costs of homeownership as a service, based on what a large panel of homeowners report their home would rent for. 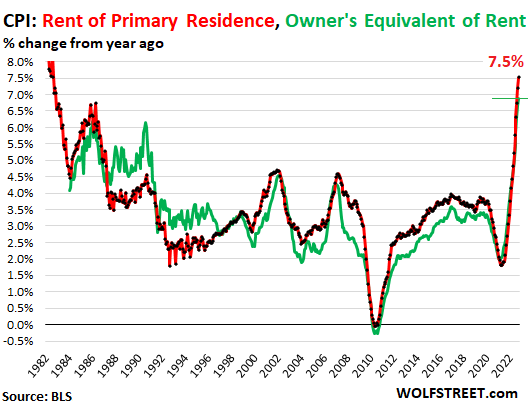 Home prices have started falling month-to-month, according to the most recent Case-Shiller Home Price Index (purple line in the chart below), which whittled down the year-over-year gain to 13.0% (read… The Most Splendid Housing Bubbles in America: Biggest Price Drops since Housing Bust 1. Record Plunge in Seattle (-3.9%), Near-Record in San Francisco (-4.3%) & Denver. Drops Spread Across the US).

The red line represents “owner’s equivalent rent of residence.” So, given how this worked out last time, this is going to be interesting to watch unfold. 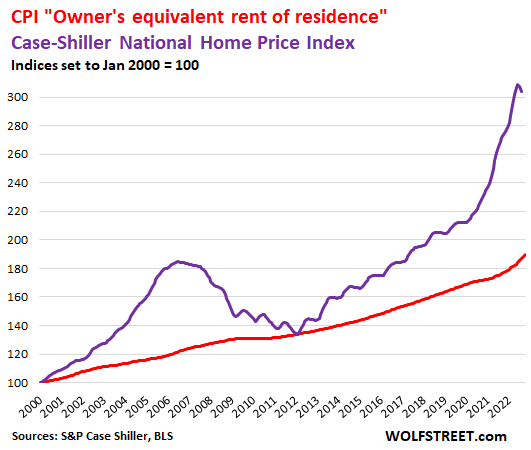 Used vehicle retail prices barely ticked down from the ridiculous high level they’d spiked to in December 2021, and have remained largely stuck in the stratosphere, though wholesale prices are plunging: 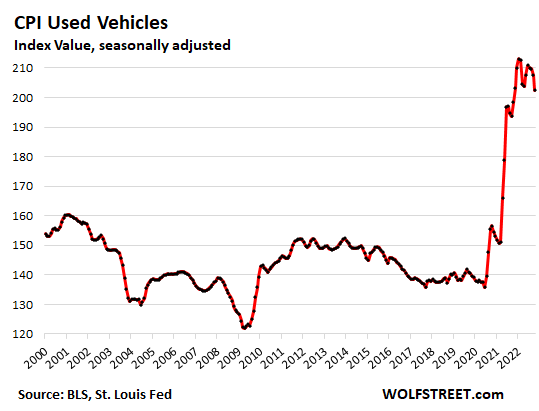 180 comments for “Services Inflation Spiked to Second Highest in 4 Decades, Would Have Spiked to Highest, If Not Slowed by Biggest-Ever Mega-Adjustment of Health Insurance CPI”