Total retail sales – powered by inflation, seen in magnificent price increases – rose 0.7% in September from August, to $625 billion (seasonally adjusted), just barely below the mind-boggling free-money-blow-off-spike in March and April. Sales were up 13.9% from a year ago, and by 20% from September 2019: 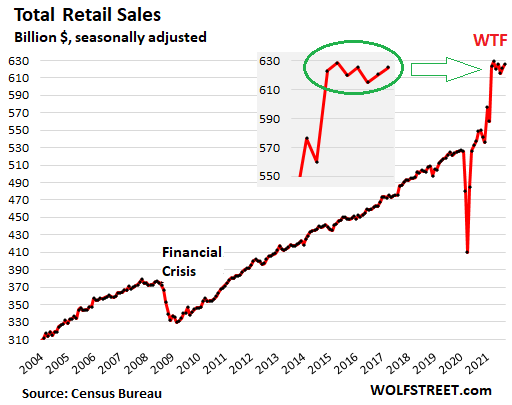 In this monstrously overstimulated economy, demand for goods has surged, triggering all kinds of shortages that are now rippling through the system, as global supply chains and transportation systems have been buckling for a year. This demand was created by $5 trillion in deficit spending by the Federal government and by $4.5 trillion in money printing by the Fed since March 2020.

The magnificent price increases, as tracked by the Consumer Price Index, have inflated retail sales. These product groups account for 52% to the retail sales here:

New & used auto dealers and parts stores: Sales ticked up 0.5% in September from August, to $123 billion (seasonally adjusted), after four months in a row of large declines off the free-money-blow-off spike in March and April. This is the largest retail category, in normal times accounting for over 20% of retail sales.

The number of vehicles delivered has collapsed in recent months – new vehicle sales in September plunged by 37% from the free-money peak in March – because dealers have run out of inventory to sell, as automakers are having production shortfalls due to the semiconductor shortage. But there’s plenty of demand still, and so prices have shot sky-high, with many new vehicles being sold at prices substantially over sticker, and used vehicles with ridiculous prices.

These massive price increases have muffled the effects of the plunge in deliveries, to where dollar-sales at new and used vehicle dealers and at parts stores in September were still up 19% from September 2019: 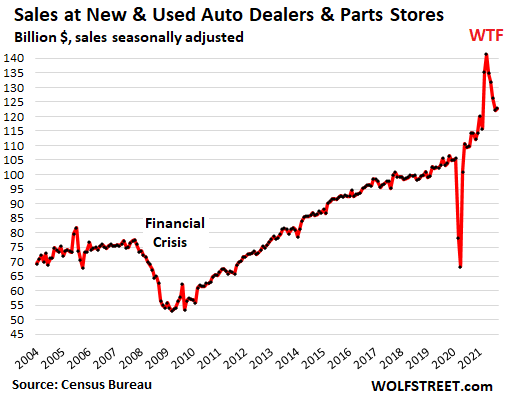 By contrast, the number of new vehicles delivered, in terms of the Seasonally Adjusted Annual Rate (SAAR) of sales, a standard industry measure, had collapsed to 2011 levels: 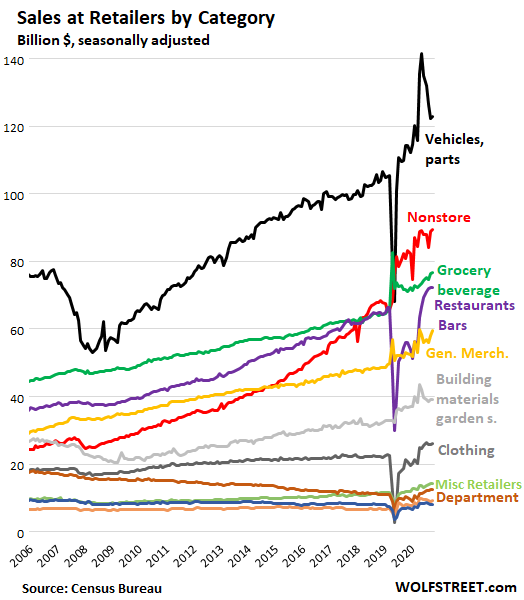 Ecommerce and other “nonstore retailers”: Sales ticked by 0.6% for the month, to a record $89 billion, seasonally adjusted, up 10.5% from a year ago, and up a breath-taking 32% from September 2019. Nonstore retailers include ecommerce sales by online-only retailers and by online operations of brick-and-mortar retailers, as well as sales by mail-order houses, street stalls, vending machines, etc. 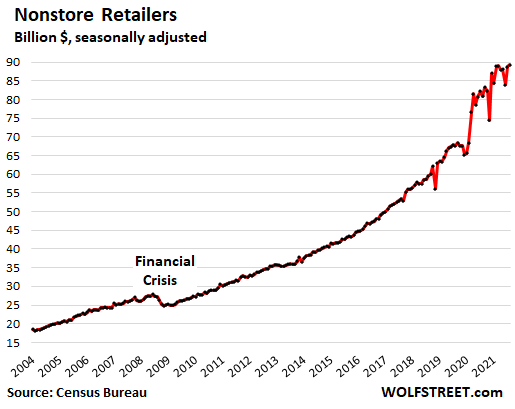 Food and Beverage Stores: sales rose 0.7% for the month, to $78 billion, up 7.0% year-over-year and 20% from September 2019, fueled by rising prices and by working from home and by not working at all, which transferred consumption from commercial buildings and the establishments around them to supermarkets: 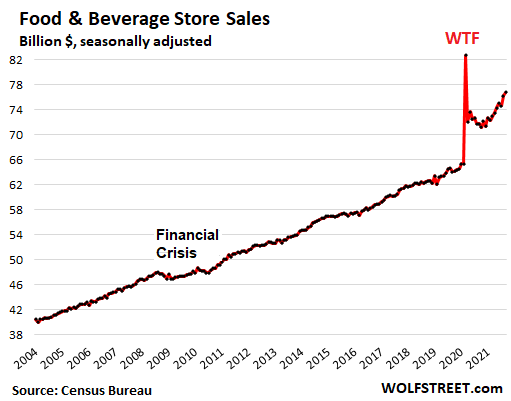 Restaurants & Bars: Sales ticked up 0.3% for the month to a record $72.4 billion, amid price increases (CPI for food away from home rose 0.5% in September and 4.7% year-over-year), as restaurants struggled with higher labor and materials costs. Compared to September 2019, sales were up 11%: 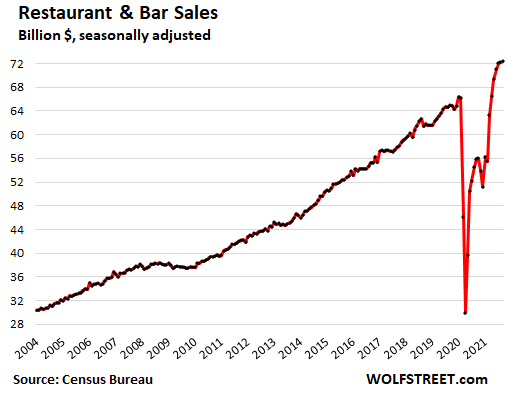 General merchandise stores: Sales jumped 2.2% for the month to $59 billion, a tad below the free-money-blow-off record in March 2021. They were up 12.1% year-over-year and 23% from September 2019. The brick-and-mortar stores of Walmart and Costco are in this category: 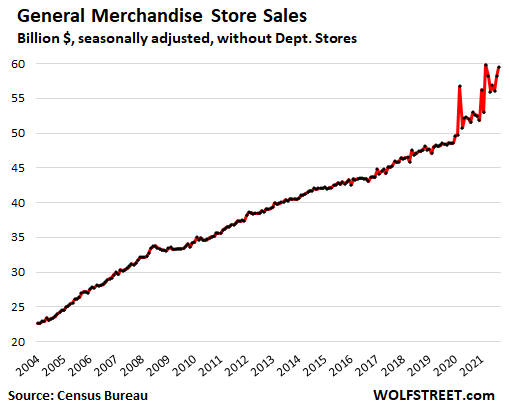 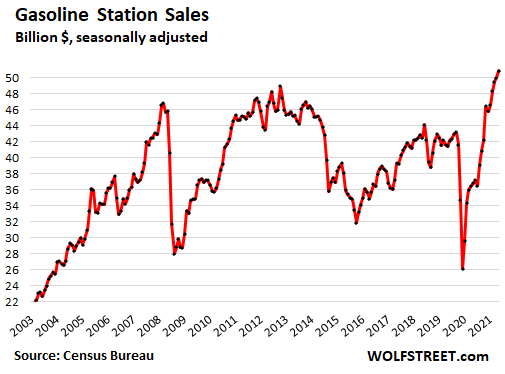 Building materials, garden supply and equipment stores: Sales were flat for the month, at $39 billion, having gone nowhere for months, and were down 10% from the DIY spike that had peaked in March. But they remained in nosebleed territory, up by 23% from two years ago: 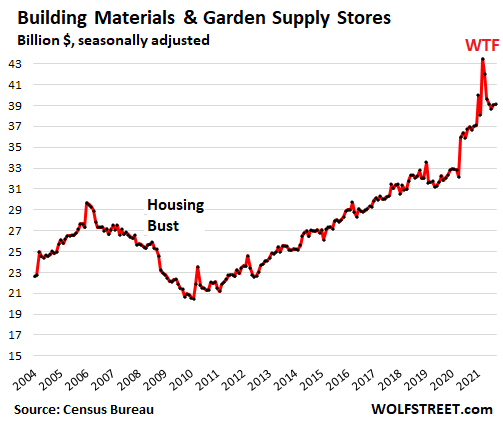 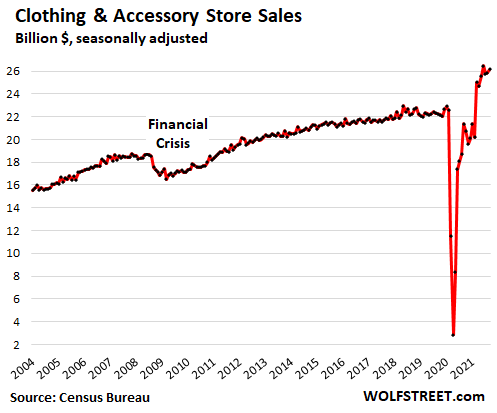 Miscellaneous store retailers, including cannabis stores: Sales jumped 1.8% for the month, by 21% year-over-year, and by 26% from September 2019, to a record $14.4 billion. These specialty stores are focused on one category of product, such as art supplies, beer making supplies, binoculars, and the big driver of this phenomenon, the red-hot cannabis stores: 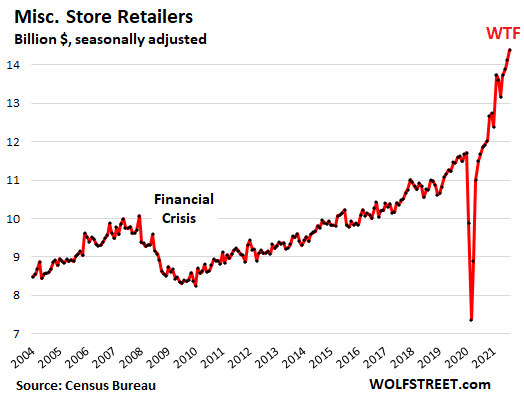 Department stores: sales rose 0.9% for the month, to $12.6 billion, up 19% from a year ago, and up 13% from two years ago. Even miscellaneous stores, driven by cannabis stores, have surpassed what used to be the iconic way of shopping in America: 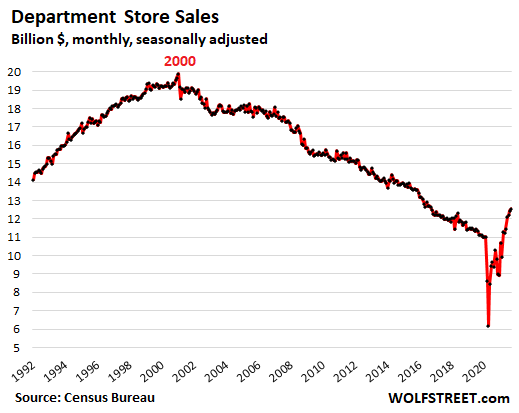 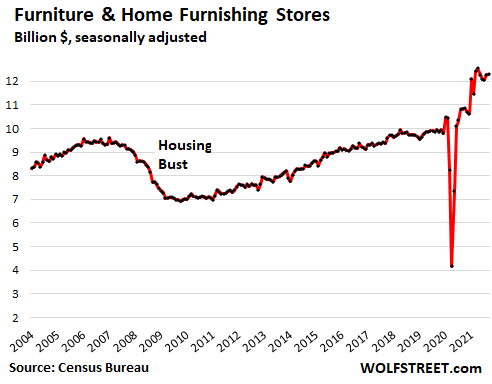 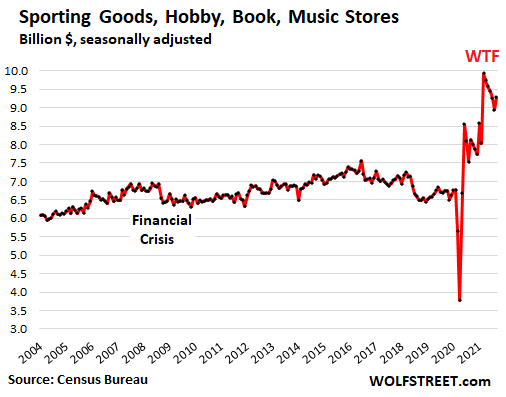 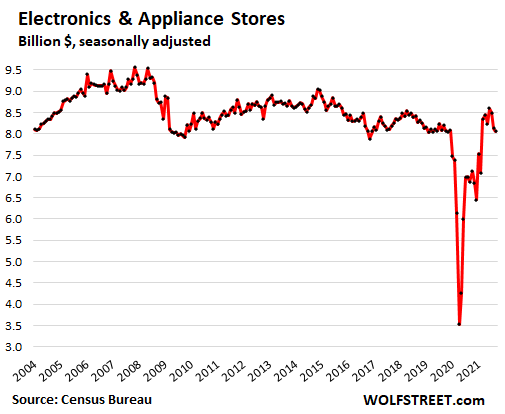