In California, sales at cannabis retailers hit $5.1 billion over the past 12 months.

In the national retail sales figures for July, there was a most wondrously booming but small-ish segment, “miscellaneous store retailers.” The Commerce Department, which released the figures a few days ago, groups into this segment a slew of tiny sub-segments of retailers, such as beer-brewing supply stores – and notably, and not so tiny anymore, cannabis retailers.

Cannabis has become a big business since the sale and use for recreational purposes was legalized in many states. And sales at “miscellaneous store retailers” jumped by 3.5% in July from June, at a time when total retail sales dipped, and by 26% from July 2019, to a record of $14 billion, at least in part driven by the blistering boom in marijuana retail sales. 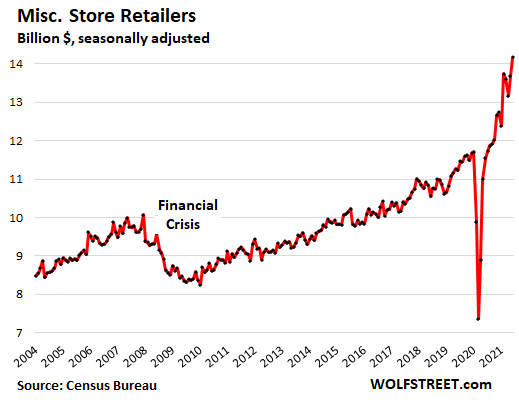 But this does not include certain medical marijuana sales, which are not taxable, and black-market sales. The sales tracked by the CDTFA are limited to “taxable” marijuana sales, mostly recreational marijuana, which became legal in California in January 2018. So what we’re seeing here is just the growth of the new business of legal recreational pot. 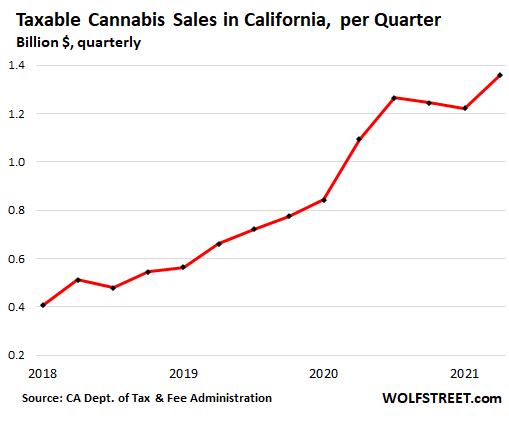 Medical cannabis has been legal for many years. But sales of medical cannabis are exempt from the new cannabis taxes if the buyer shows a valid Medical Marijuana ID issued by the California Department of Public Health along with valid government-issued ID card. These Medical Marijuana IDs, which require a physician’s recommendation, have been easy to get, and medical pot shops did a lively business long before the recreational pot became legal. But those sales are not included here.

Over the past 12 months, sales of taxable cannabis reached $5.1 billion in California, up by 48% from the same period a year earlier. This chart shows the trailing 12 months for each quarter. There are not many retailer segments out there with this kind of growth pattern: 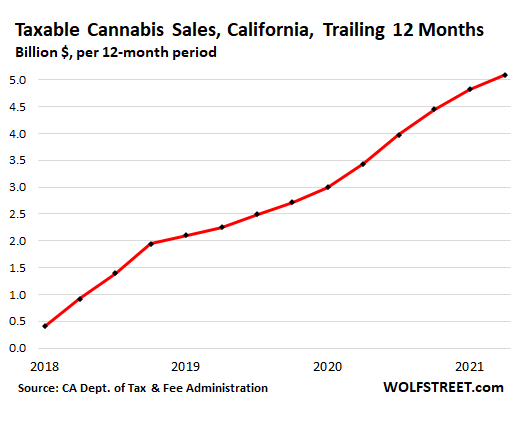 In Q2, the CDTFA collected $333 million in these new recreational-cannabis taxes. Over the past 12 months, it collected $1.27 billion. The taxes come in three layers: excise tax, cultivation tax, and cannabis sales tax.

Pot, like alcohol and tobacco products, is an ideal target for heavy taxation. It causes some moaning and groaning among its consumers and business owners, and it keeps the black market alive and it motivates people to get Medical Marijuana IDs, and it encourages people to grow their own. But for many consumers, it’s still less hassle to go to the store and buy some pot – rather than buy it on the black market or grow it at home – hence the red-hot growth of taxable marijuana sales despite the heavy taxes.

In many other states, the entire business of pot – from its agricultural aspects to distribution and retail – is just as popular as in California. Spread across the US, legal cannabis is turning into a serious business.

Even though the cannabis business is still illegal under federal law, the standard surveys that the Census Bureau sends to business addresses to collect data for its monthly retail sales report are tracking cannabis retail sales but not in their own category.

For now, the North American Industry Classification System (NAICS) has put medical and recreational marijuana retailers into the category of “Miscellaneous Store Retailers” (NAICS 453998), and they’re now pumping up sales at these “miscellaneous store retailers.” When this industry becomes legal under federal law, the big businesses that have already started circling it will pile into it in a big way. And then maybe, cannabis retailers will get their own NAICS code.

118 comments for “No Brick & Mortar Meltdown for Legal Marijuana Retailers”