There are now all kinds of reports that the Canadian housing market – the #2 housing bubble in the world behind New Zealand’s – is “softening” or “decelerating.” Today, Statistics Canada added to that notion when it reported that new house prices increased by only 0.4% in July from June, the slowest price growth all year, with prices in Toronto up only 0.2% and in Vancouver up 0.3%. This is what the current notion of softening means: Prices are still rising but at a slightly less crazy rate as demand has backed off and sales volume has dropped. Sales of existing homes in July had dropped for the fourth month in a row.

In recent months, the Bank of Canada repeatedly cited the craziness in the Canadian housing market which formed a historic spike as a result of the Bank of Canada’s no-holds-barred asset purchases and interest rate repression.

So the BoC started tapering its asset purchases last October. It stopped buying mortgage-backed securities. It stopped buying provincial bonds. It shed most of its holdings of repos and Canada Treasury bills so far this year. And in three announced taperings, it reduced the amount of its weekly purchases of Government of Canada bonds, from C$5 billion per week last year to C$2 billion per week currently. The overall effect is that the assets on its balance sheet dropped from C$575 billion in March to C$490 billion currently as of today’s balance sheet. 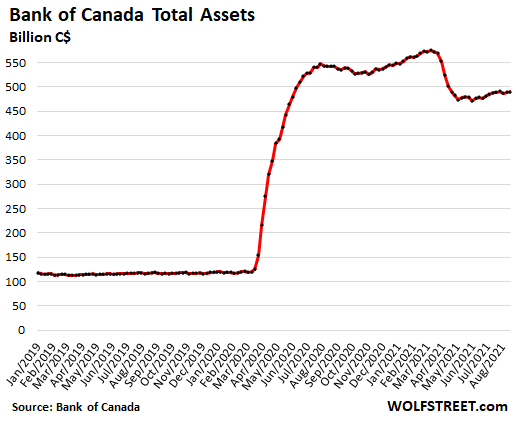 And there may be some signs that this tapering by the BoC has started to remove some fuel from the housing market – that “softening” that folks have been reporting.

In Greater Vancouver, house prices jumped by 2.1% in July, a “softening” from the jumps of 2.7% in June, and 2.3% in May, for a year-over-year spike of 17.1%. The BoC’s no-holds-barred monetary policies starting in March 2020 flawlessly turned around Vancouver’s housing downturn that had started in August 2018: 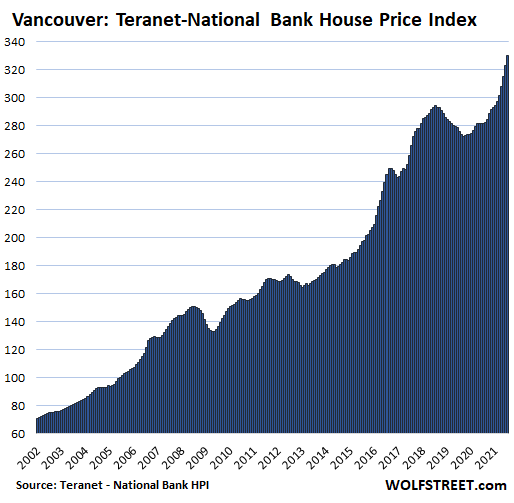 In the Greater Toronto Area, the price spike “softened” to 1.6% in July from June, the smallest jump since February, after the spikes of 2.7%, 3.4%, and 3.0% in the prior three months. Year-over-year, the index jumped by 17.4%. Toronto too had experienced a decline in house prices in 2017 followed by not much action until the BoC went hog-wild: 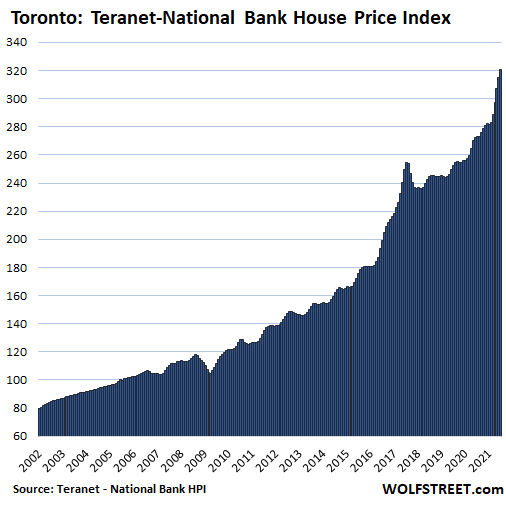 The Teranet-National Bank House Price Index uses the “sales pairs” method, similar to the Case-Shiller Home Price Index in the US, comparing the price of a house that sold in the current month to the price of the same house when it sold previously. It tracks how many more Canadian dollars it takes to buy the same house over time, and it now takes a heck of a lot more Canadian dollars than a year ago, just house price inflation, which is what the BoC has fueled with its radical policies.

In Hamilton, Ontario, house prices spiked by 2.1% in July from June, but that was the smallest jump since February, having peaked in June with a 3.8% jump. The “softening” has set in. But year-over-year, the index spiked by a mind-boggling 30.1%. 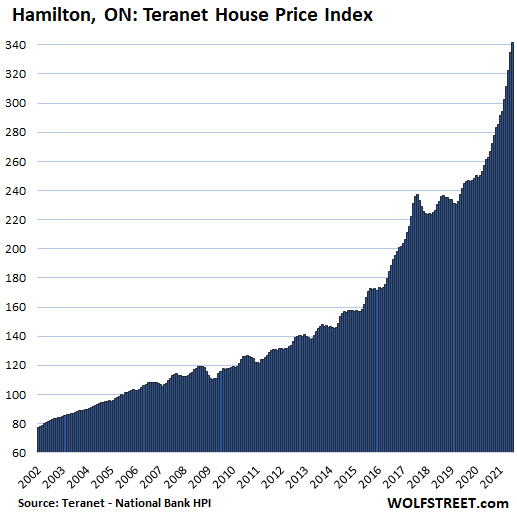 All charts here are on the same scale as the chart for Hamilton. As we go down the list, house price increases were smaller than in Hamilton over the past two decades, resulting in larger white spaces above the curve.

In Victoria, house prices jumped by 2.1%, “decelerating” from the jumps in the prior three months that topped out at 3.6% in June. Year-over-year, the index soared 21%. The housing market had flattened from 2018 until the BoC went nuts in March last year. 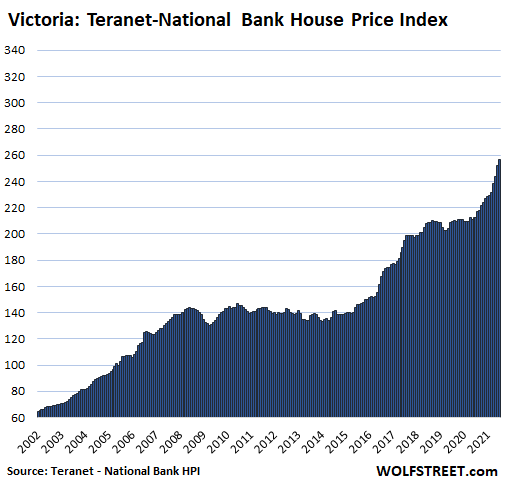 In Winnipeg, house prices jumped 1.6% for the month, and 10.5% year-over-year. House prices had flattened from 2013 on, until the BoC decided to fix that untenable situation in March last year: 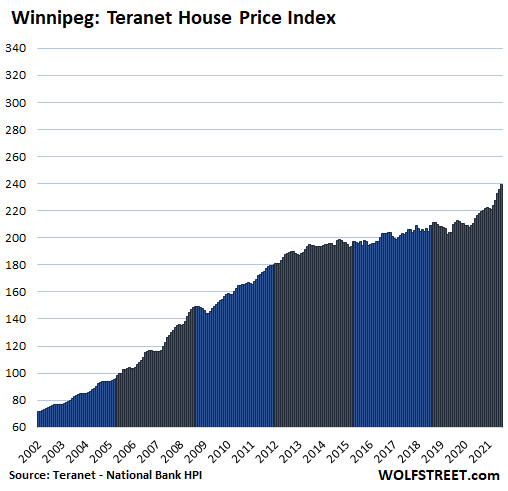 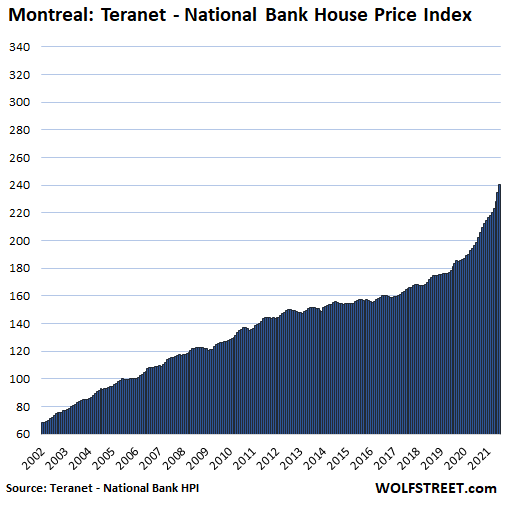 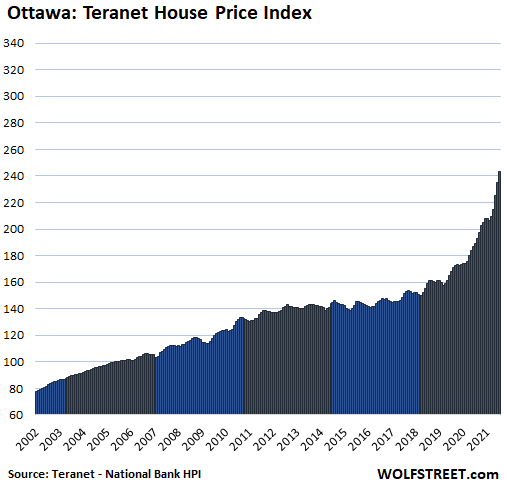 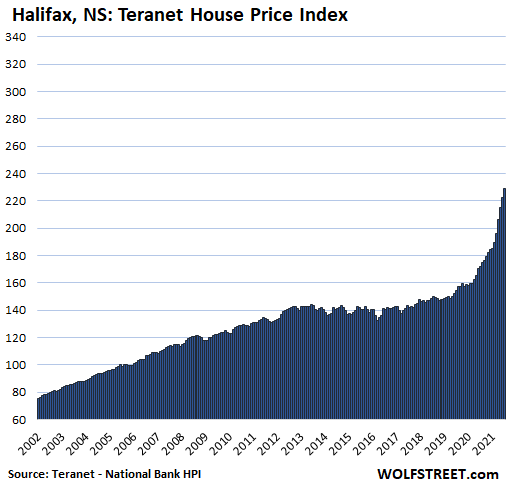 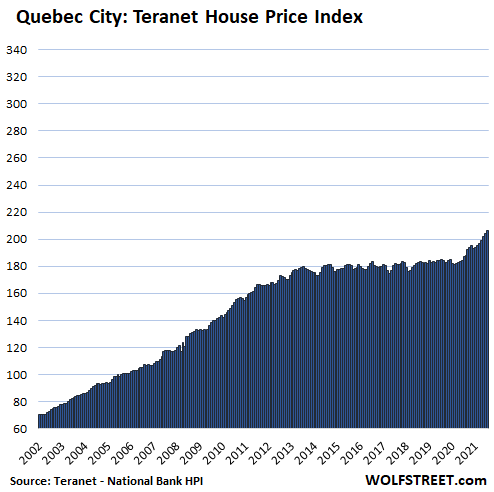 In Calgary and Edmonton, the oil-bust towns and remaining two cities in the Teranet-National Bank House Price Index, house prices were driven in the past by big spikes in the price of oil and hopes in Canada’s oil patch for instant riches. But that hasn’t been the case since 2007, which was when the last oil-powered housing bubble peaked and then imploded.

In both cities, prices have recently been rising. In Calgary, the index is up 7.5% year-over-year, having squeaked by the oil-bubble peak in 2007. And in Edmonton, the index is up 6.5% year-over-year, but remains below its oil-bubble peak of 2007. And so these cities, with house prices that might actually make some sense, don’t qualify for inclusion in this crazy list of the most splendid housing bubbles in Canada.