The two big components in the jobs report today – the data from surveys of 60,000 households and the data from surveys of 144,000 employers at 697,000 individual worksites – diverged further: Households reported strong gains in jobs, and this includes the self-employed; but employers (businesses, governments, and nonprofits) reported slim gains in their payrolls, dragged down by a sharp decline in government jobs.

Households said that the number of people working, including the self-employed, jumped by 526,000 in September, according to the Bureau of Labor Statistics today, after having jumped by 509,000 in August, and by 1.04 million in July. Over the past three months combined, 2.1 million additional people were working, either in regular jobs or self-employed (red line). 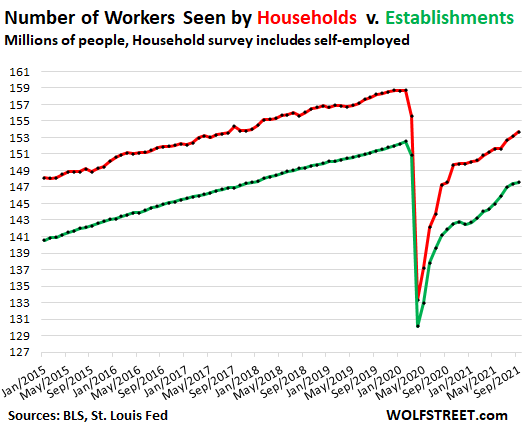 Households also reported that the number of long-term unemployed (jobless for 27 weeks or more) fell by 496,000.

The strength in the data from households is also reflected in the employment-population ratio, which rose to 58.7% (from 58.5% in August), the highest since March 2020; and by the unemployment rate, which fell to 4.8% (from 5.2% in August).

The average work week in September rose by 0.2 hours to 34.8 hours. The hourly wage increased by 19 cents for the month and by 4.6% from a year ago, to $30.85 per hour. “The data for recent months suggest that the rising demand for labor associated with the recovery from the pandemic may have put upward pressure on wages,” the BLS noted.

Timing of the data and federal unemployment benefits.

The household and employer data are based on surveys that were collected by about the 12th of the month, and reflected the early part of September.

The federal unemployment payments under the CARES Act, PUA (for the self-employed), PEUC, PAC, and MEUC expired on September 4. But that’s not when payments stopped. Payments for prior weeks, and in some cases months, for unemployment claims through September 4 are still going out since a lot of these payments are running late.

People are not returning to the labor force.

The labor force data – derived from the household surveys – show that many people still have not returned to the labor force, and are still not looking for a job, because they retired, or are resting on their stock market-crypto-housing laurels – the Fed’s infamous “Wealth Effect,” – or cannot find a daycare center, or feel threatened by the virus, or are chasing quality of life, or whatever. If they can afford it, good for them.

The labor force is defined as people who either had a job during the survey period or who were actively looking for a job in the prior four weeks.

People who might in the future want to work but weren’t actively looking for a job during the weeks prior to the survey aren’t considered to be in the labor force.

After initially bouncing back sharply from the collapse in April last year, the labor force hasn’t made much progress. And in September, it fell by 183,000 people and remains down by 3.2 million people from December 2019. 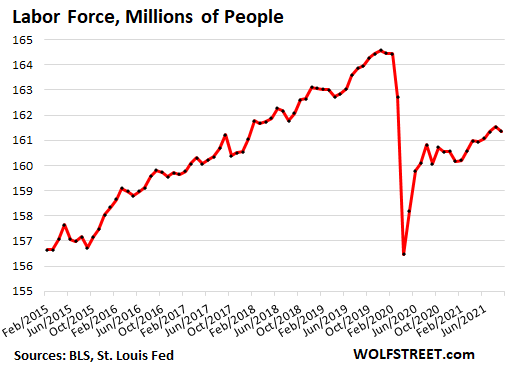 The decline in the labor force of 183,000 in September is notable because households reported an increase in employment of 526,000. And by extension, the number of people actively looking for a job in September plunged. This also produced the sharp drop in the unemployment rate to 4.8%.

And the decline of the labor force by 3.2 million people since December 2019 indicates why employers have been hollering about labor shortages. The Fed’s Beige Book reported that employers couldn’t meet demand because of “extensive,” “widespread,” “intense,” “acute,” “persistent,” “broad,” and “ongoing” “labor shortages.” The labor force also explains in part why there are a record 11.7 million unfilled job openings.

In September, the employment losses occurred at state and local governments, which shed a combined 161,000 workers in education. Employment in private education fell by 19,000.

“Hiring this September was lower than usual, resulting in a decline after seasonal adjustment. Recent employment changes are challenging to interpret, as pandemic-related staffing fluctuations in public and private education have distorted the normal seasonal hiring and layoff patterns.” 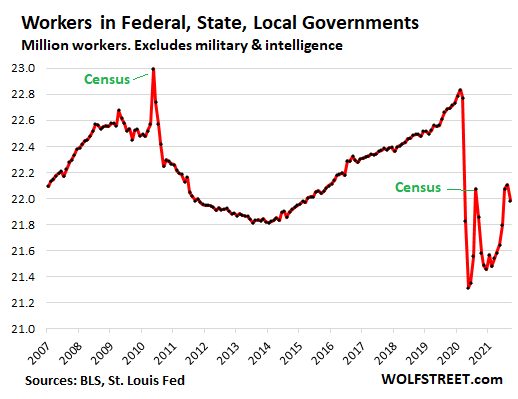 Employment in manufacturing rose by 26,000 workers in September, and by 114,000 over the past three months, to 12.5 million jobs, amid loud complaints about difficulties in hiring qualified people. Payrolls were still down by 353,000, or by 2.8%, from February 2020. Average hours worked remained at 40.4 hours per week, overtime rose to 3.3 hours per week.

But manufacturing production, by expanded automation and overtime, has more than fully recovered and in August hit the highest level since January 2019.

And manufacturers are screaming not only about labor shortages but also about material shortages and delays, including the devastating chip shortages that has waylaid automakers. 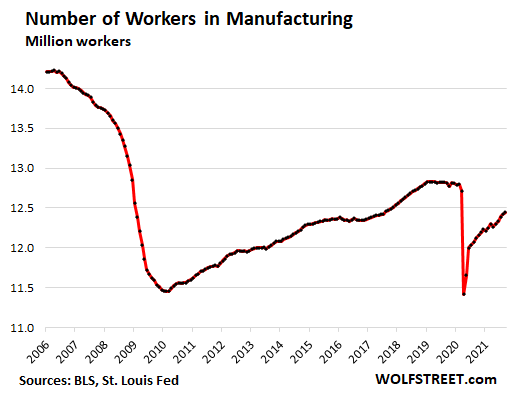 Employment in the leisure and hospitality industry rose by 74,000 jobs for the month and by 520,000 over the past three months. Restaurants, bars, hotels, and casinos are strenuously trying to hire workers, and have the greatest difficulties doing so for a variety of reasons, including pay, hours, working conditions, and the risks associated with constant exposure to the public. Many former workers in that sector may have moved on to different jobs. Employment was still down by 1.59 million from the peak in February 2020: 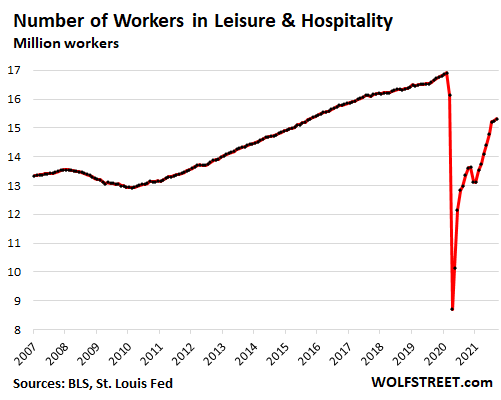 Employment in Construction rose by 22,000 workers for the month, and by 34,000 over the past three months, to 7.45 million workers, amid loud complaints by construction companies of massively delayed projects due to material shortages of all kinds, from the most mundane fasteners to windows. 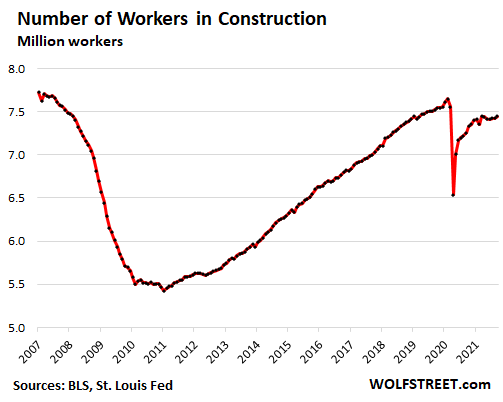