27 million people still on unemployment rolls, or 16.9% of Labor Force. Initial claims under state and federal PUA programs tick up to 1.43 million in the week (not seasonally adjusted).

First the data, then the data chaos.

It’s still a historically catastrophic number, but it’s the least catastrophic number since mid-May: 27.02 million people (not seasonally adjusted) continued to claim unemployment insurance under all state and federal programs, down by 1.04 million from the prior week, according to the Department of Labor this morning.

This means that 16.9% of the civilian labor force (160 million) continues to claim unemployment benefits. 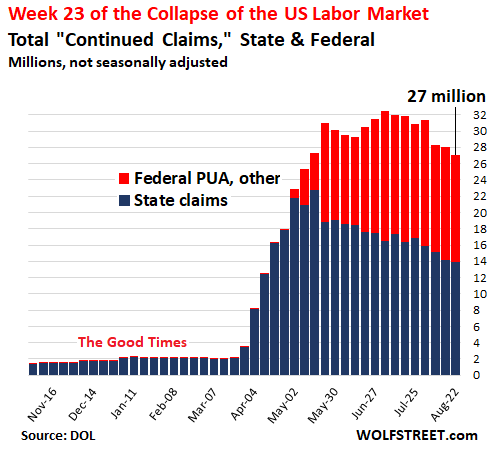 The number of people who continued claiming unemployment insurance (UI) under state programs fell by 272k to 13.9 million (not seasonally adjusted), in line with the downtrend that had started in May.

The number of people on UI under all federal programs established by the CARES Act and some other programs fell by 769k to 13.1 million (not seasonally adjusted):

The $600 a week in extra benefits – part of the CARES Act but expired at the end of July – were on top of these state and federal unemployment programs and are not included here. People who qualify for one of the state or federal programs received the extra $600 a week. This has been replaced by a program from the White House of $300 extra a week, that could become $400 a week in some states, and is now being rolled out by the states. All programs are administered through the same state unemployment office.

Initial claims under state programs are an indication of the number of newly laid off workers. After having “unexpectedly” risen by 50k in the prior week, initial claims fell by 68k (not seasonally adjusted) in the week ended August 22, to 822k: 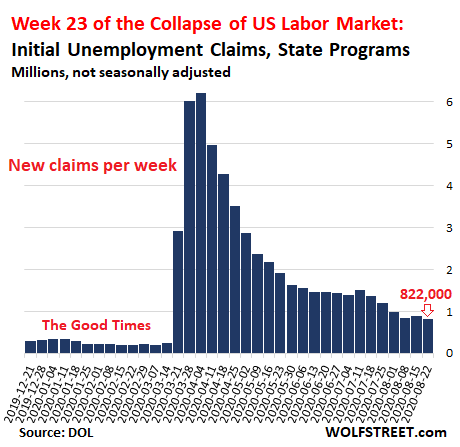 Initial claims under the federal PUA program for contract workers jumped to 608k, from 524k in the prior week (not seasonally adjusted).

Combined, state and federal initial claims ticked up to 1.43 million people who newly lost their work and filed for benefits during the week.

During the early weeks of the collapse of the US labor market, it became clear to me that seasonal adjustments were exaggerating unemployment claims. So with the UI report on May 28, I switched to discussing only “not seasonally adjusted” unemployment claims. Today, in a special note, the Labor Department explained that my hunch was correct, and why it was correct, and that it would change its method starting in September.

Unemployment has seasonality. For example, there is strong hiring in October, November, and December by retailers for the Christmas Shopping Season. Then in January, these people get laid off, and many of them file for unemployment benefits, and so initial unemployment claims jump every year in late December and in January. This is predictable, and “seasonal adjustments” iron that out. There are also smaller seasonal variations over the spring and summer that are normally predictable and can be adjusted out of the data.

The way the Labor Department made those seasonal adjustments was by multiplying the not seasonally adjusted data by certain well-established factors for that season – the “multiplicative factors,” as it calls them. But during the Pandemic, the number of claims jumped by a never-before-seen magnitude (6 million in one week), and the “multiplicative factors” exaggerated the seasonally adjusted claims.

But starting on March 21, this method of “multiplicative factors” went totally haywire, one way, and then in early July the other way, and in late July and August it flipped again, and it continues to go haywire: 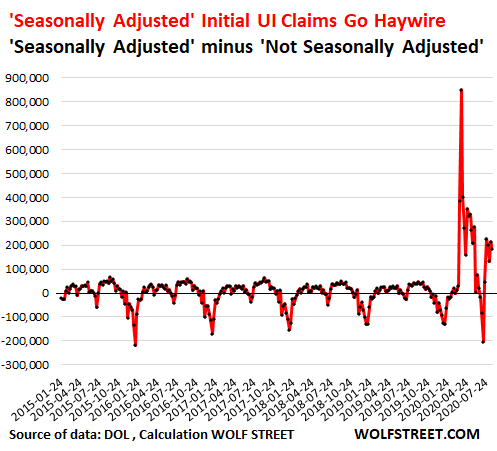 So the Labor Department is going to change the method, it announced today. And it explains:

And this caused those adjustments to go haywire during the Pandemic, or as the DOL said, it created “systematic over- or under-adjustment of the series.”

The DOL will change from its old method of seasonal adjustments (“multiplicative factors”) to its new method of “additive factors.” And this “additive seasonal effect is assumed to be unaffected by the level of the series,” and tends to “more accurately track seasonal fluctuations in the series and have smaller revisions.”

So the DOL announced today, that starting in September, “the Bureau of Labor Statistics staff, who provide the seasonal adjustment factors, specified these series as additive.”

OK, so here you have part of the reason for the data chaos in the unemployment data that has been a key theme in my coverage of this mess since March.

56 comments for “Unemployment-Data Chaos: Labor Dept. Admits “Seasonal Adjustments” Went Haywire During Pandemic (why I stopped using them in May): Week 23 of U.S. Labor Market Collapse”