Used vehicle wholesale prices spiked 5.3% in September from August, to a new record, according to Manheim this morning, the largest auto auction operator in the US and a unit of Cox Automotive. This spike in the Used Vehicle Value Index more than wiped out three months in a row of declines that had spread false hopes that the used vehicle craziness would finally abate.

The sales conversion rate at the auctions rose throughout September and in the last week of September surpassed 66% compared to 52% in September 2019 as dealers were more aggressive at buying vehicles. This, according to Manheim, indicates that wholesale demand will likely remain strong through October: 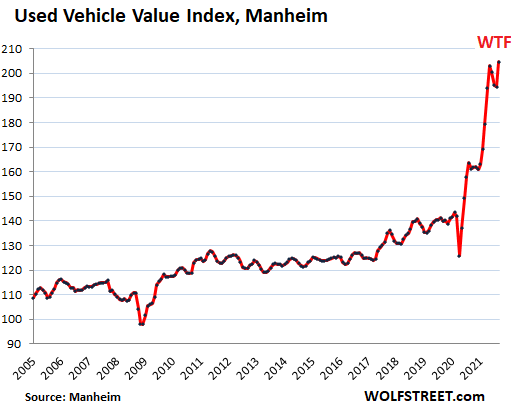 In dollars and cents: Over the first nine months of the year, the average resale value of a one-year old vehicle jumped by 25%, or by $7,759, according to Cox Automotive. This is the fabled situation where buyers can end up paying more for a one-year old used vehicle than those vehicles might have cost new. But the new vehicles are in short supply or require long waits, and their prices have spiked too.

Supply was tight, but not nearly as catastrophic as with new vehicles. Normal supply for used retail is about 44 days of sales. In September used retail supply was 37 days. Wholesales supply, which normally is 23 days, was 18 days. So tight supply, but not a “shortage,” a phenomenon that new-vehicle buyers are facing.

The low supply is a result of sharp decline in sales at auctions by the three largest categories of sellers in the wholesale market, according to the quarterly presentation by Cox Automotive today. The percentages are compared to normal September levels:

When the rental car business – particularly the airport rentals – froze up in the spring of 2020, it started a chain reaction that spiraled into the used-vehicle market and can be seen in the average mileage of rental vehicles sold at auction.

The average miles of these “rental risk” units had spiked to 88,000 miles by May 2021 and stayed near there for three months. But in August, the average miles plunged, and in September it plunged again, to 56,611 miles, but still up 33% year-over-year.

I also saw from what the rental fleets’ own retail outlets advertised on the internet and in my inbox that many of their lower-mileage cream puffs ended up on their own retail lots (chart via Cox Automotive): 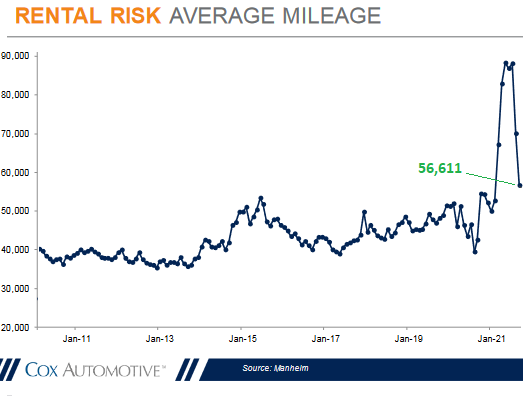 The average price of these “rental risk” units sold at auction in September jumped by 37% year-over-year, according to Cox Automotive, compared to a 27% spike of the overall Used Vehicle Value Index. These are just crazy numbers.

And these crazy numbers are particularly astounding since a vehicle is for most people a discretionary purchase: most people can keep driving what they have for a few more months, or a few more years, and they don’t have to buy today at these crazy prices. People have proven that they can do this when sales collapsed during the Financial Crisis and then stayed down.

But people are not doing it now. They’re flush with cash from all the stimulus and cash-out mortgage refis, and from newly found wealth from the Fed’s “Wealth Effect,” and since it was free money, it doesn’t matter anymore what they spend for a vehicle. And so people pay whatever. And dealers have figured this out too, and they’re scrambling to buy inventory, outbidding each other, and they’re confident that they can pass on those prices plus some to their customers, and they’re doing it and making record gross profits along the way.