“We need lower consumer demand to give supply chains time to catch up… recover efficiency… and break this vicious circle”: CEO of Maersk’s APM Terminals, one of the largest container port operators.

Today’s release of the Fed’s “Beige Book“ – an informal narrative of the economy as told by small and large companies in the 12 Federal Reserve districts – listed “shortage” 77 times, up from 19 times in January.

Shortages of nearly everything, with labor-related shortages being the most prominent. These shortages “restrained” growth, and companies were “unable to meet demand” because of these shortages. Here are some standouts:

The labor shortages came with “turnover,” and employees leaving their jobs to work somewhere else, which confirms the data in the report on job openings and quits in the most distorted labor market ever.

Some standouts on labor turnover:

Lead times – a symptom of snarled supply chains, labor shortages, and parts and material shortages – was mentioned 7 times, up from 3 times in January:

In this environment of shortages of all kinds, amid high demand, price increases were written all over the report, including these 66 mentions:

These shortages and tangled up supply chains are a symptom of the most monstrously overstimulated economy and markets ever, the result of $4 trillion that the Fed has printed since March 2020, and the $5 trillion in deficit spending that the government has blasted out into the economy. $9 trillion in total, in an economy with a GDP of $22.7 trillion (nominal annual rate). 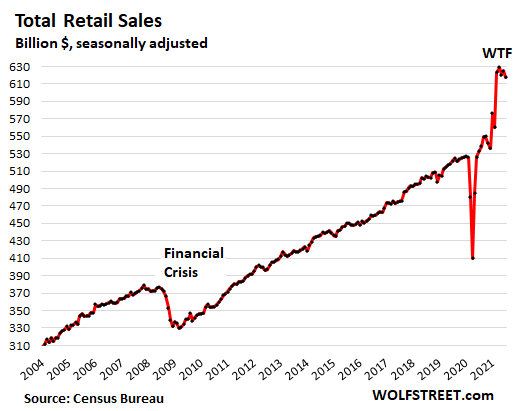 And with equally hair-raising plunges at the right edge (such as inventories): 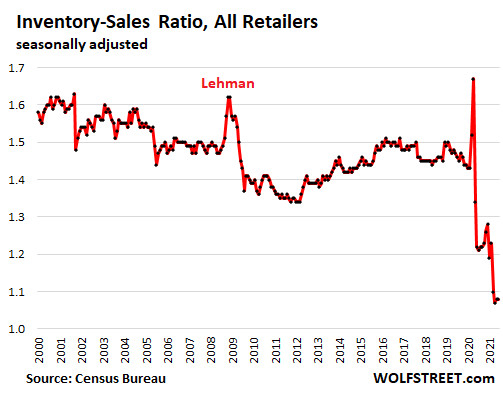 Now comes Morten Engelstoft, CEO of Maersk-owned APM Terminals, one of the world’s largest port and container terminal operators. He sees the chaos in the shipping industry, the port congestion, the exploding transportation costs, the delays, amid a massive surge of imports into the US as many goods that Americans buy are imported, and imports have spiked: 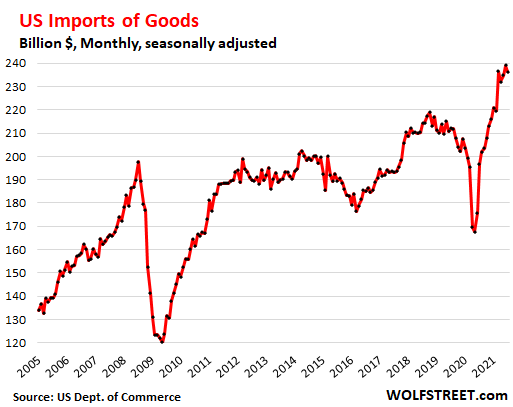 This soaring demand was fueled by the $9 trillion in stimulus in the US. In an interview with the Financial Times, he proposed a solution everyone already knows. For the economy to get out of this “vicious circle,” as he said, consumers should buy less.

He said a “vicious circle” of shortages had formed by this surging demand that strained container carriers, suppliers, ports, and logistics companies.

“We need to work out how we break this vicious circle,” he said. “We need lower [consumer demand] growth to give the supply chain time to catch up, or differently spread out growth. Over a long period of time, we will need to recover efficiency.”

A percentage increase in US imports and exports results in a far larger bump in volumes than elsewhere, because “it’s a percentage of an enormous volume,” he said. “The sheer size of business going through is so enormous that the amount of port capacity, truckers, warehouses, and even labor to man all the equipment has created a bottleneck.”

Consumers would buy less, including fewer imported goods, if the Fed and the government ended the vast amounts of stimulus that are still ongoing in the already most monstrously overstimulated economy ever. It would allow the supply chains to catch up, become efficient again, and it would take some pressure off prices.