The ECB has increased the assets on its balance sheet by a monstrous €154 billion ($181 billion) per month so far this year via an alphabet soup of programs, blowing by even the crazed money-printers at the Fed with their average rate of $123 billion a month. While there appears to be consensus at the Fed that “tapering” its asset purchases will begin this year and will be completed in the first half next year, with assets then remaining level, the ECB announced today that it will start tapering its asset purchases now.

Markets eagerly swallow these taper denials hook, line, and sinker. Anything but tapering.

In the press release, the ECB said that the pace of net asset purchases under the Pandemic Emergency Purchase Program (PEPP) would be “moderately lower.” PEPP is the biggie in the alphabet soup of programs, running at about €80 billion ($95 billion) per month recently.

The ECB didn’t specify by how much it would reduce its purchases under PEPP, but said that it would “purchase flexibly according to market conditions.”

The asset purchases under PEPP will continue in diminished form “at least” until March 2022. After that, the balance would be level “at least” until the end of 2023, before the “roll-off” of those bonds might begin. The roll-off means that bonds mature and roll off the balance sheet when they’re redeemed and would not be replaced with new purchases. This has the effect of reducing the bond portfolio over time as bonds mature.

The other programs would go on as before.

The Targeted Longer-Term Refinancing Operations (TLTRO III) will continue. These are loans to Eurozone banks, now with a balance of €2.2 trillion.

The Asset Purchase Program (APP), the now relatively small classic QE program that existed before the pandemic and includes sovereign bonds, corporate bonds, covered bonds, and asset-backed securities, would continue at a monthly rate of €20 billion and would “end shortly before” the ECB starts raising its interest rates.

This is in line with the consensus among central banks, confirmed by the Fed, that QE needs to end before interest rates can be hiked, on the rationale that QE pushes down long-term rates, while raising policy rates pushes up short-term rates, which would wreak havoc on the yield curve.

Starting in March 2020, the ECB went hog-wild. And now the ECB is trying to figure out how to get out of this without blowing up the Eurozone: 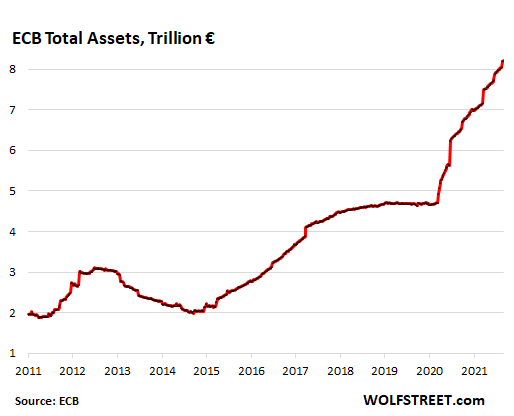 Lagarde said that the decision to taper – oops, I mean, to recalibrate – the asset purchases was unanimous.

Timidly following in the footsteps of:

The Bank of Japan cut its asset purchase to near-zero, without any hoopla, thereby not only ending the pandemic QE binge but also the third leg of the economic religion of Abenomics – namely massive money printing. The current rate of asset purchases is minuscule and the lowest since before Abenomics in 2012: 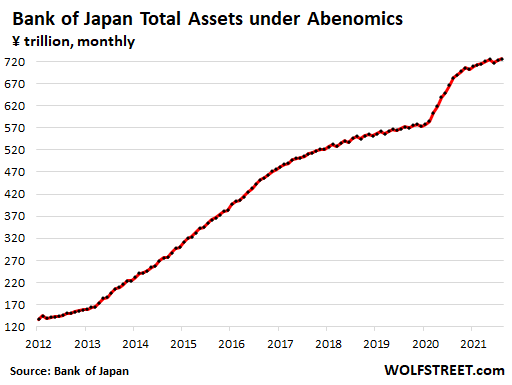 The Bank of Canada started tapering its purchases of Government of Canada bonds last October, ended its purchases of mortgage-backed securities, and shed its repos and Canada Treasury bills, with the effect of cutting is total assets by 15% since the peak in March: 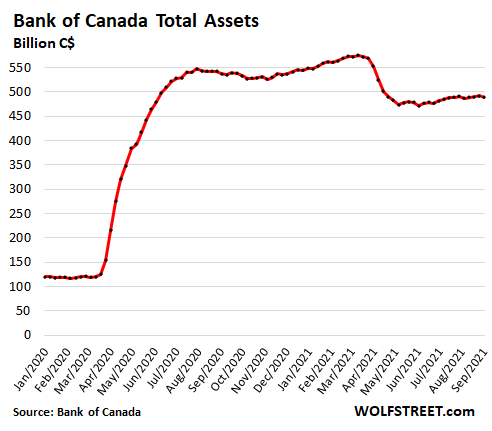 The Bank of England announced its decision to taper its asset purchases in May, and has since cut its weekly bond purchases, on net, from about £4 billion a week to close to £2 billion a week through the summer: 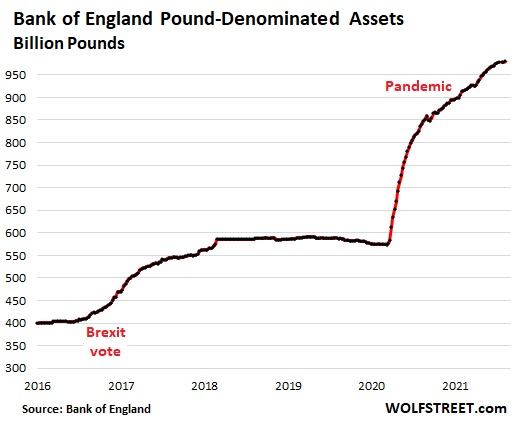 Reserve Bank of New Zealand ended its asset purchases cold turkey in May without tapering to pull the plug on the #1 housing bubble in the world: 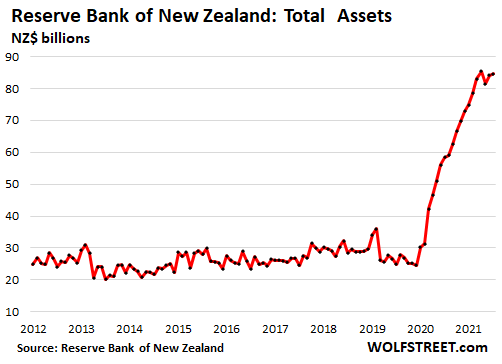 The Reserve Bank of Australia announced in July that it would start tapering its asset purchases from A$5 billion a week to A$4 billion a week. Total assets on its balance sheet declined last week for the first time all year: 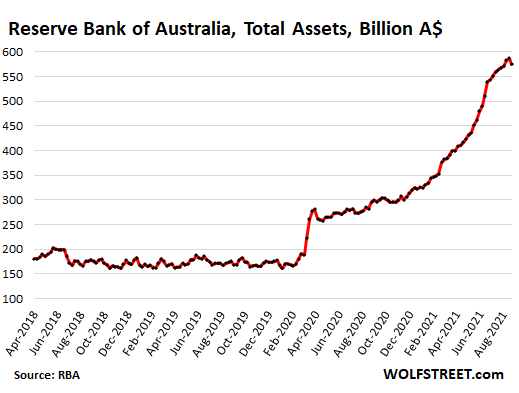 The Riksbank of Sweden confirmed that it is going to end QE entirely by late 2021.

And what is taking the Fed so long? No one knows. Amid the most monstrously overstimulated economy and markets ever, the Fed is still printing $120 billion a month, though there appears to a consensus to not fall much further behind the curve than it already is and start tapering its asset purchases this year.