The concept of selling overpriced new houses to everyone is running into trouble. Sales of new single-family houses in June plunged by 6.6% from May, and by 32% from the peak in January, to a seasonally adjusted annual rate of 676,000 houses, the lowest June since 2018, according to the Census Bureau this morning. This multi-month plunge brought house sales back to pre-pandemic levels. And given the construction boom in apartments and condos in urban centers over the past decade, single-family house sales remain a fraction of the boom in 2002 through 2007: 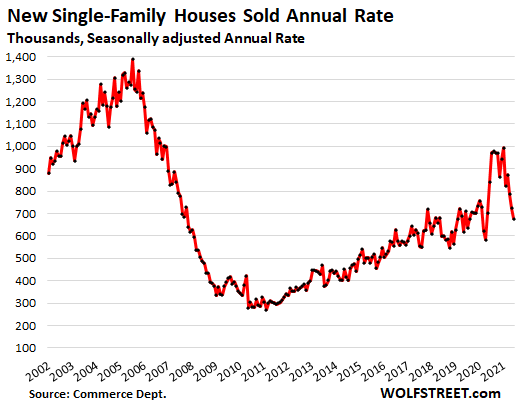 Soaring inventories of unsold new houses. Homebuilders are building, that’s for sure, even if more homes are now sitting on the market. Supply jumped to 6.3 months at the current rate of sales, as unsold speculative inventory for sale jumped to 353,000 houses (seasonally adjusted), the most since December 2008: 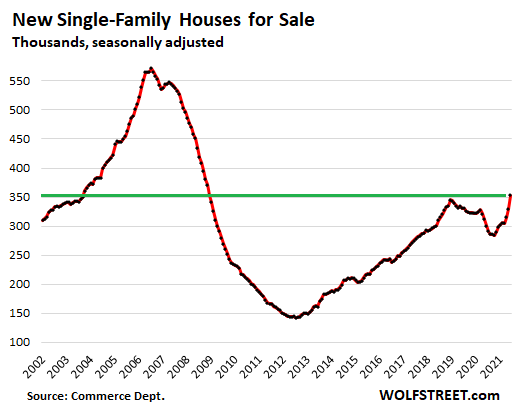 Prices dropped and unwound the spike of the past few months. The median price of new single-family houses sold fell by 5.0% in June from May, to $361,000, the lowest since March, having thus unwound part of the majestic spike that occurred starting in the summer last year. In April, the median price was up 22% year-over-year; in May it was still up 20%; in June, it was up 6.1% year-over-year: 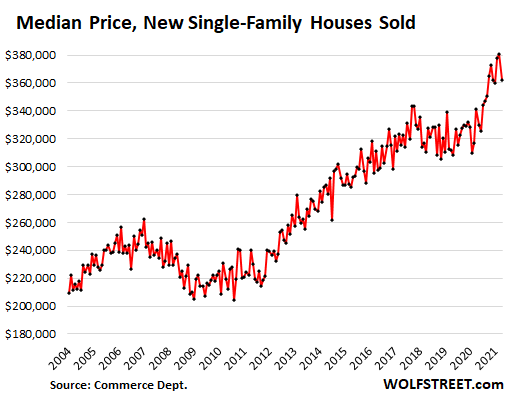 What’s going on? Practically nothing was sold in the under $200,000 price category. The under $300,000 price category accounted for only 28% of total new house sales, down from 39% in June last year. That’s where the volume used to be, but people willing and able to buy a new house under $300,000 are out of luck – prices have moved away from them. And facing those higher house prices, and already struggling with soaring prices in the goods and services they need on a daily basis, they went on buyers’ strike.

At the high end, this is where the money is. And the people that can only afford a house up to $300,000 can just go to heck. This is what this new Fed-directed money-printing economy has turned into.

But the other side of the coin is that demand falls off because there aren’t that many potential buyers in the high-end categories.

In addition, there is the whole issue of the shift to working from home that caused many people to go buy a house in a different location, a larger house to accommodate one or two home offices, and that trend may have run out of steam by now.

And of course, construction costs spike the most since 1980. OK, you knew this was coming. Lumber costs spiked to ridiculous highs by early May, then plunged but only part of the way, and recently have risen again. Chicago lumber futures are currently at $641 per thousand board feet, still up 60% year-over-year and 72% from July 2019. Steel futures have surged; for example, rebar futures are up 73% year-over-year. The prices of all kinds of other construction materials have surged. And labor costs have risen. 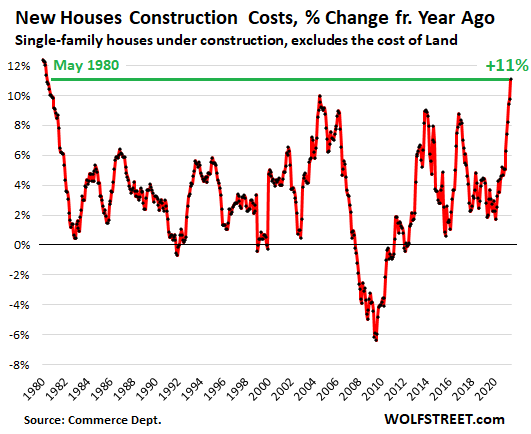 229 comments for “Buyers’ Strike: Sales of New Houses Plunge 32% in 5 Months, Unsold Inventory Highest since 2008, Prices Drop, Construction Costs Spike by Most since 1980”