The miracles of the new economy.

People are still not flying as much as they did before, and they’re barely using mass transit, but they’re sure driving a lot, particularly for a holiday week as in early July: 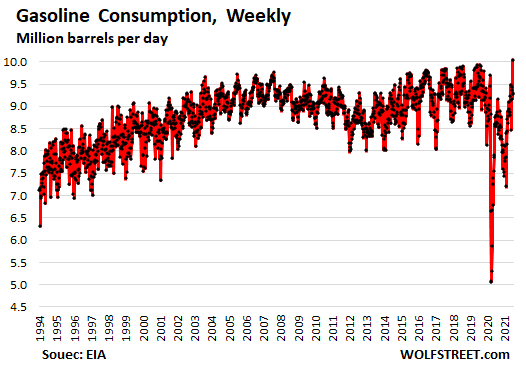 The chart also shows the long-term near-stagnation of gasoline consumption: The first time that gasoline consumption reached 9.7 million barrels per day –within 3% of the record in July 2021 – was over the Independence Day week in 2005. Before the Pandemic, gasoline consumption was roughly where it had been a decade earlier, after having recovered from the trough following the Great Recession.

The EIA tracks consumption in terms of gasoline supplied by refineries, blenders, etc., and not by retail sales at gas stations.

The four-week moving average – which irons out some of the week-to-week fluctuations – in the week of July 9 was flat with the same week in 2019; and for the most recent reporting week of July 16, it was down 0.9% from 2019. Demand for gasoline has now fully recovered. 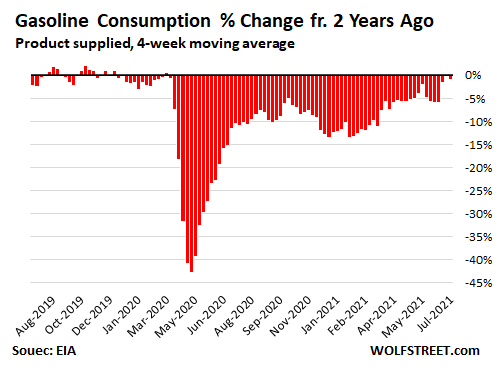 But people are not using mass transit much. Much of that has to do with working from home or not working at all. And the rest has to do with not wanting to use mass-transit. We can see this in the San Francisco Bay Area. Other transit authorities have reported similar results. Traffic across the Golden Gate Bridge and the Bay Bridge into San Francisco in June was nearly back to the average level in 2019, according to the Bay Area Toll Authority.

But ridership on the Bay Area Rapid Transit (BART) system in June was still down 80% from June 2019. It’s ticking up from the lows, but the trains are still nearly empty – even as brand-spanking new trains are making their sporadic appearance: 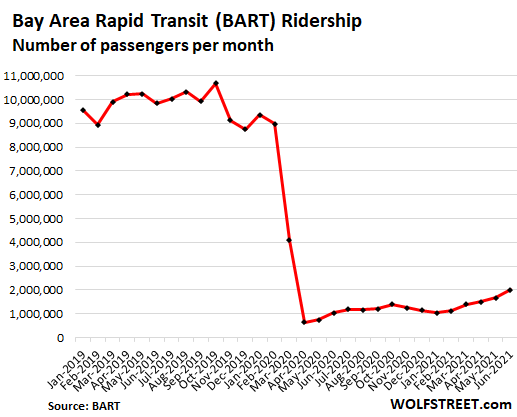 And people are not flying as much. They’re flying a lot for leisure within the US, but they’ve cut business travel such as going to conventions, and they’ve cut international travel for business and leisure, given the travel restrictions. The EIA reported that the four-week moving average consumption of kerosene-type jet fuel, at 1.44 million barrels per day, was still down 22% in the latest reporting week compared to the same period in 2019: 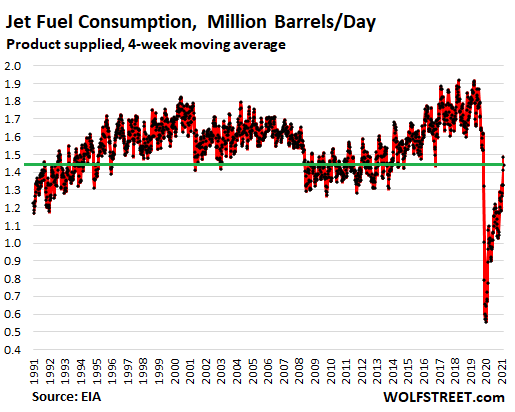 This is another twist in the new miracle-economy, where 12.6 million people claim some kind of unemployment insurance, while 7.1 million fewer people are working than before the pandemic, and while companies across the board complain about “labor shortages.” But people sure are driving a lot!

154 comments for “People Sure Are Driving a Lot, Gasoline Consumption Hits Record, But Flying & Mass Transit Lag Way Behind”