Purchases by buyers from China collapsed by 84% since the peak in 2017.

Purchases by foreigners of existing homes in the US – meaning used homes, not new homes – in the period from April 2020 through March 2021 plunged 27% from the prior year, to $54 billion, the fourth year in a row of declines, and by 65% from the peak in 2017 ($153 billion), according to the National Association of Realtors’ annual report on foreign buyers today. Foreign buyers have gotten cold feet and face other hurdles, such as capital controls, particularly buyers from China. 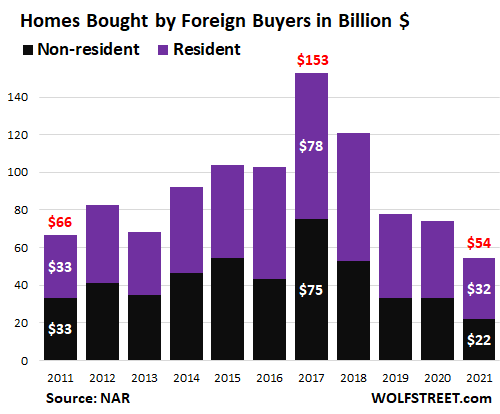 Resident foreign buyers are non-US citizens who are recent immigrants with less than two years in the US at the time of purchase; or non-immigrant visa holders who have resided for more than six months in the US for professional, educational, or other reasons.

Non-resident foreign buyers are non-US citizens with permanent residences outside the US, who normally purchase for investment, vacation, or visits of less than six months on non-immigrant visas. 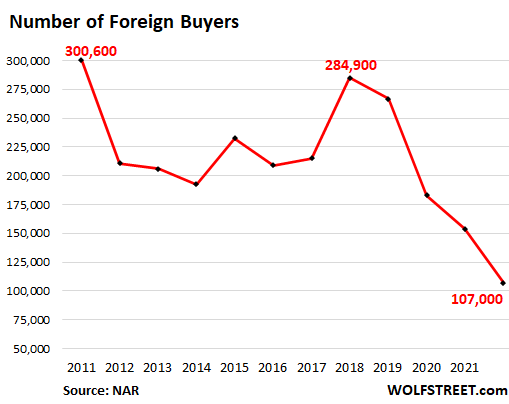 The top five countries of origin, the number of homes purchased, and the change from the pre-pandemic year 2019, and from 2017:

However, the Chinese buy on average more expensive homes, and in terms of the dollar volume of their purchases are ranked #1, followed by Canada, India, Mexico, and the UK.

Top destinations for buyers from:

They buy more expensive homes than Americans. Median price by origin, plus the percentage change from the prior year. All five of them are higher than the USA median price of $305,500 (+11%):

This plunge in purchases by foreign buyers began in 2018, and the pandemic year was the fourth year in a row of declines. Each year, the residential real estate industry hopes that foreign buyers, particularly from China, will once again start showing up in large numbers. And for the past four years, they have been disappointed. All major US real estate brokers have divisions in China, which Chinese-language websites, and with staff in China, that attempt to funnel Chinese buyers and Chinese money into the US real estate market. Now all hopes rest on travel restrictions between countries being lifted, and of course in China’s case, on capital controls being lifted by the Chinese government.

133 comments for “US Home Purchases by Foreigners Plunged for 4th Year, to Decade Low. But They Bought More Expensive Homes than Americans”