Paying even more to get even less. Exactly what American consumers need the most in these trying times.

So we’ve got a little situation here. We’ve got a little bitty inflation uptick, I mean the worst inflation spike in three decades, and now total personal income from all sources, including from the now fading free-money-from-the-sky stimmies, rose 0.5% in April compared to April a year ago; but adjusted for inflation, “real personal income,” fell 3.0% year-over-year, according to the Bureau of Economic Analysis on Friday.

Month-over-month, and not adjusted for inflation, personal income from all sources plunged 13% in April from March to a seasonally adjusted annual rate of $21.2 trillion – after having spiked by 21% in March for a stimmie-powered historic WTF moment. Every one of the three waves of stimmies triggered a glorious overshoot. So going forward, most of those stimmies have been received and accounted for. 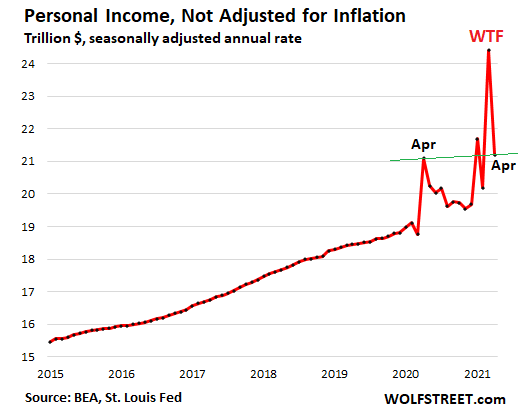 Personal income just from wages and salaries, not adjusted for inflation, rose 1.0% in April, from March, and will likely increase further in May, as more consumers re-enter the workforce and as employers raise wages in order to attract these people back into the workforce, in what is one of the weirdest labor markets ever, with record job openings, while 16 million people are still claiming state or federal unemployment compensation.

But then there’s inflation, and thereby the erosion of the purchasing power of “real” personal income. Total “real” personal income from all sources — adjusted for inflation and expressed in chained 2012 dollars – according to the Bureau of Economic Analysis, fell by 3.0% year-over-year – hence the downward-sloping green line:

Nevertheless, American consumers gave their darndest to hold up the global economy. In March, consumer spending on durable and nondurable goods had performed a stimmie-driven WTF spike of historic proportions, triggering record trade deficits as many of these goods or their components and materials are imported. But spending on services was still lagging woefully behind.

In April, some consumers still got their stimmies and spent them, and other consumers were spending the stimmies that they’d gotten in March, and overall spending in April held up near the WTF level in March. But what we’re now seeing too is the impact of inflation.

March and April were the first two months back-to-back in three decades where large-scale inflation has cropped up in the data. So it’s time to see how that worked out.

“Real” spending on durable goods dropped by 0.9% in April from March. But not-adjusted for inflation, it rose 0.5%. This includes the mega price increases in used and new vehicles.

“Real” spending on nondurable goods dropped 1.6% in April from March. Not-adjusted for inflation, it dropped 1.3%.

In total, “real” consumer spending on all goods and services fell 0.1%, but not-adjusted for inflation, it rose 0.5%. You get the drift. Consumers spent even more money to get even less for it:

Everyone now has their own laundry list of goods and services that have suddenly gotten a lot more expensive, or where the price stayed the same, but the goods have gotten smaller or the quality was lowered, or a combination. Astute consumers have been reporting this for months, but in March and April, it started to seriously show up in the data.

400 comments for “Inflation Bites Chunk out of Personal Income & Spending”