The majestic inflation overshoot has arrived.

The Personal Consumption Expenditures Price index without food and energy, the “core PCE” index, jumped by 0.7% in April from March, after having jumped by 0.4% in March from February, according to the Bureau of Economic Analysis today. Those two months combine into an annualized core PCE inflation rate of 6.4%, meaning that if price-increases continue for 12 months at the pace of the past two months, then the annual inflation would be 6.4% as measured by the lowest lowball measure the US has.

This was the highest two-months annualized rate since 1985. And it shows to what extent inflation has suddenly heated up in March and April.

Over the past three months – so April, March, and February – the annualized increase of core PCE inflation was 4.9%, the highest since 1990.

The annualized PCE index eliminates the legitimate issue of the “Base Effect” that is now getting trotted out to brush off the inflation data (I discussed the Base Effect in early April to prepare for what would be coming).

The Base Effect applies only to year-over-year comparisons. In March last year, the core PCE price index dipped by 0.1% from February, and in April it dipped by 0.4% from March. So comparing today’s PCE index to that dip in April (the lower “base”) would include the Base Effect.

The three-months annualized core PCE eliminates the Base Effect. It shows the pace of inflation over the past three months and projects what it would looks like if it continues for an entire year. It was 4.9%, the highest since 1990: 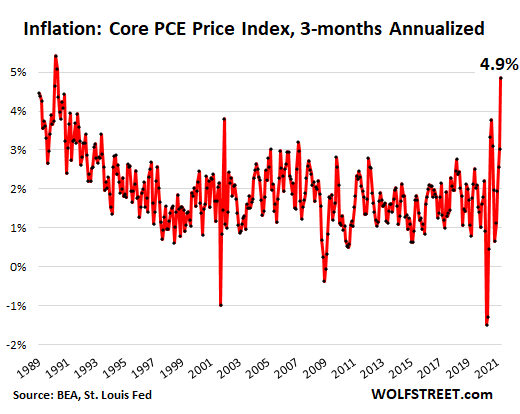 Year-over-year and not annualized, core PCE jumped by 3.1%, the biggest increase since 1992. This includes the Base Effect. But it also includes another effect, in the opposite direction: Last fall’s very low PCE core inflation rate waters down the current red-hot spurt of inflation. So this metric overstates the current rate of core PCE inflation because of the base effect; and it understates the current rate of PCE inflation because of the very low inflation in the fall last year. Both effects combined probably balance each other out: 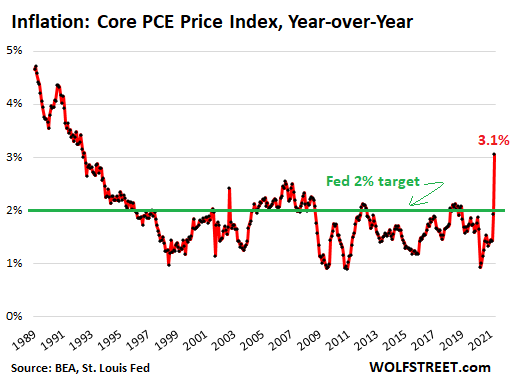 So this core PCE is the lowest lowball inflation measure that the US has concocted so far. And it is the one that the Fed uses as its yardstick for its “symmetrical” 2% inflation target. The green line in the chart above indicates that 2% target.

“Symmetrical” for the Fed now means that inflation can run a little higher than 2% for a while after it ran lower than 2%. The Fed has not indicated exactly how far core PCE can overshoot the 2% target and for how long it can overshoot it. But it said it would be “patient.”

My gut tells me that some of the crazy price increases we have been seeing recently will subside eventually, such as the WTF used vehicle price spikes, and the price increases in new vehicles amid stories that even GM and Ford dealers are selling trucks at or above sticker, and amid data showing that these price increases generated all-time record gross profits for dealers.

My gut tells me that some of this will calm down, that buyers will eventually have had enough of this, and sales will dwindle at those prices, and prices would have to come down. But they will likely not go back to where they’d been, but remain significantly higher, and eventually start rising again from there.

And while this is going on, services will pick up the pace, such as airline ticket prices, or rents, or healthcare expenses, or a million other services. This movement has now been kicked off. Some of the price spikes will be “temporary,” then giving up some of the gains, before resuming their climb, while others will take their place and spike in a game of inflation Whac-a-Mole that the consumer is going to pay for.

281 comments for “Fed’s Favorite Lowball Inflation Gauge is Red-Hot, Not Seen in Decades, Even Without the “Base Effect””