It’s a crazy situation the Fed backed into as tsunami of liquidity goes haywire, banking system strains under $4 trillion in reserves, and General Treasury Account gets drawn down.

Reverse repos are liabilities on the Fed’s balance sheet. They’re the opposite of repos, which are assets. With these reverse repos, the Fed is selling Treasury securities to counterparties and is taking their cash, thereby massively draining liquidity from the market – the opposite effect of QE.

In past years of large reserves following QE, banks shed reserves via reverse repos, reducing reserves on the balance sheet and increasing their Treasury holdings, to dress up their balance sheet at the end of the quarter, and particularly at the end of the year. Reverse repos declined after the Fed started reducing its assets during Quantitative Tightening in 2018 and 2019. But the current record spike is taking place in the middle of the quarter, a sign that the enormous amount of liquidity is going haywire: 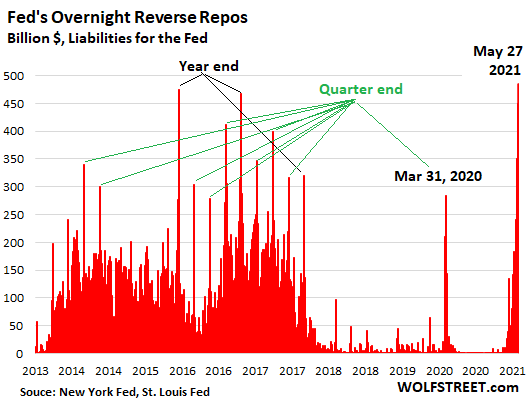 This is a crazy situation that the Fed backed into.

Even as liquidity is going haywire, and as the Fed trying to deal with it via reverse repos, the Fed is still buying about $120 billion per month in Treasury securities and mortgage-backed securities, thereby adding liquidity.

But with its reverse repos of $485 billion, the Fed undid four months of QE!

The Fed could stop buying securities altogether and reduce its balance sheet, which would also drain liquidity from the market. But the Fed cannot do that because it said it would be slow and deliberate in announcing changes in its monetary policy, and that it might eventually talk about talking about tapering, so it can’t just suddenly do an about-face.

But this liquidity-haywire situation appears to be an emergency that needs to be addressed now, and so the Fed is addressing it through the backdoor via the overnight reverse repos.

At the same time, the Fed continues QE. Its total assets were of $7.90 trillion on its balance sheet as of May 26, released today, were down by $19 billion from the record last week, following the typical pattern. These assets include $5.09 trillion in Treasury securities and $2.24 trillion in mortgage-backed securities (MBS):

The Fed has discussed this liquidity issue during the last FOMC meeting and summarized some of the discussions in its meeting minutes. It noted that “a modest amount of trading” in the reverse repo market took place at negative yields, meaning that there is so much demand for Treasury securities, and so much liquidity chasing them, that the holders of liquidity were willing to lose money to obtain Treasury securities. This threatens to push related rates into the negative, such as SOFR (Secured Overnight Financing Rate) which is the Fed’s reference rate to replace LIBOR.

The Fed, sitting on $5.09 trillion in Treasury securities, has been stepping into the reverse repo market, selling Treasuries overnight to satisfy this demand for Treasuries and keep yields from meandering below zero.

The tsunami of liquidity.

Everyone has their own theory as to why there is so much demand for Treasury securities. But one thing we know: the banking system is creaking under a huge amount of liquidity.

Bank reserves on deposit at the Fed – a liability on the Fed’s balance sheet, money that the Fed owes the banks and that it pays the banks currently 0.1% interest on – ballooned to a record of $3.98 trillion on April 14 and have since then zigzagged down a smidgen. On the Fed’s balance sheet released today, they were at $3.81 trillion. This is a sign of just how much liquidity banks are swimming in: 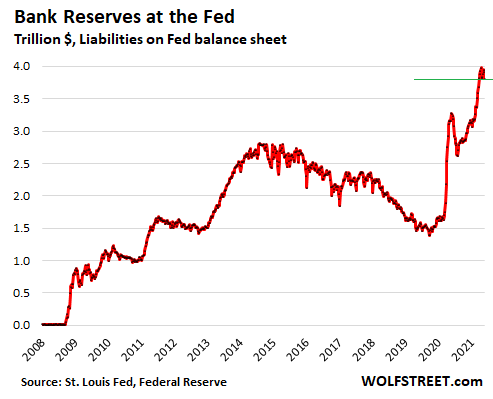 The government sold a gigantic amount of debt last spring, adding $3 trillion to its debt in a few months and kept the unspent amounts in its checking account – the General Treasury Account or GTA at the Fed, which is a liability for the Fed, money that it owes the US Treasury. The balance in the GTA ballooned to $1.8 trillion by July 2020, compared to the pre-crisis range between $100 billion and $400 billion.

The Mnuchin Treasury started spending down the balance in the checking account by borrowing a little less. By early January, the GTA was down to $1.6 trillion.

The Yellen Treasury formalized the drawdown and in early February announced that it would bring the balance down to $500 billion by June. This turned out to be too much too fast, and it now looks like August will be the month when the drawdown reaches the $500 billion mark. 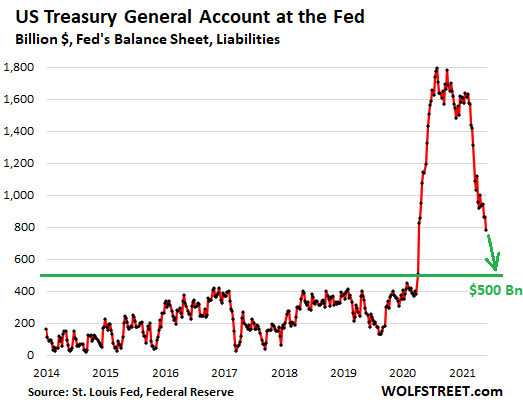 The drawdown of the GTA has some implications for the markets: this is money that the government will spend but doesn’t have to collect in taxes or borrow; it already borrowed it in March through June last year. And the Fed mopped up this debt with its $3 trillion in asset purchases. So the drawdown means that the government has been spending this money that the Fed had already monetized in the spring last year.

221 comments for “Fed Drains $485 Billion in Liquidity from Market via Reverse Repos, Undoing 4 Months of QE, Even as QE Continues, Total Assets Near $8 Trillion”