Not a sign of strength, but of big economic distortions.

Consumers are spending their stimulus money and their extra $600 a week in unemployment benefits, and now the extra $300 a week in unemployment benefits, and their fraudulently obtained unemployment benefits. And they’re also spending the money they’re not paying to landlords because they’ve stopped making rent payments due to the eviction ban. And they’re spending the money they’re not paying to mortgage lenders because their mortgages are now in forbearance and they don’t have to make mortgage payments. And they’re spending on other stuff the money they’re not spending on airline tickets and restaurants and hotels. In other words, consumers are spending, but not always where they used to, and retail sales have hit a record in July and August, and much of this retailed merchandise was imported.

Imports of goods in August fell 4.3% year-over-year, to $201 billion (seasonally adjusted) as imports of consumer goods jumped, while imports of capital goods and industrial supplies – which is what companies buy – fell, according to the Commerce Department this morning.

But exports of goods, which would really help the US economy – they plunged 13.3% year-over-year, to $118 billion, with nearly all major categories plunging by the double digits. And the trade deficit (exports minus imports) worsened by 13% to an all-time record worst terrible horrible $82.9 billion: 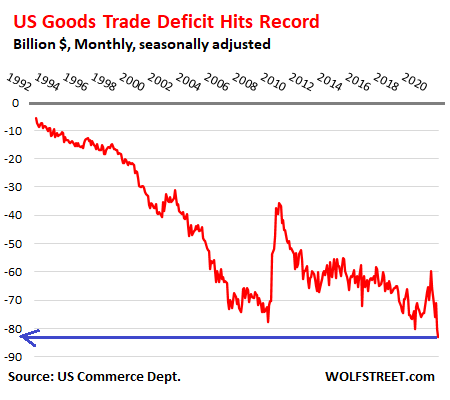 Imports of consumer goods, the largest category, rose by 2.4% in August compared to August last year, to $58 billion – that’s the power of stimulus money. Imports of food, feeds, and beverages rose 6.8%, to $13 billion.

But imports of industrial supplies fell 11.3% compared to August last year, to $37.9 billion; imports of capital goods fell 4.1% to $55 billion. Imports of other goods fell 2.2% to $10 billion. And imports of the wide category that includes cars, trucks of all kinds, buses, parts, auto bodies, chassis, tires, engines, etc. fell 12% year-over-year to $28 billion.

This is the disconnect, after three decades of trade policies that favored only Corporate America and its relentless focus on globalization, lower costs, and stock prices, instead of the US economy and labor. Imports in red, exports in black: 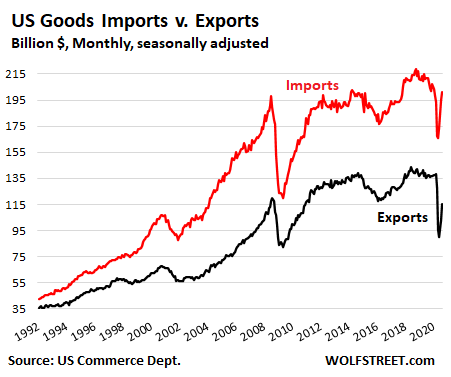 A merchandise trade deficit is a negative for the economy. And it’s a negative for the GDP calculations. It lowers GDP. The stimulus money – the portion that went overseas – stimulated the economies overseas, and these countries, steeped in their economic troubles, countered by cutting back in purchases from the US.

Many countries want to “export themselves out of trouble,” and that’s working for countries that can pull it off.

But the US – with its skewed incentives and the totally globalized retail giants such as Walmart and Amazon and globalized Corporate America that doesn’t care about anything other than its stock price and low costs – wants to “import itself out of trouble.”

And that, by definition, never works in boosting the economy, though you can boost stock prices with it. Rising imports and a record worst terrible trade deficit are not signs of strength, but of big economic distortions.

89 comments for “Powered by Stimulus & Rent/Mortgage Payments “Not Made,” US Trade Deficit Hits Record Worst Terrible Level Ever”