New York City, San Francisco, Honolulu are still down over 80% from a year ago in terms of “seated diners.” Then there is the “LN-shaped” recovery in Pittsburgh.

Six months into the Pandemic, restaurants that haven’t given up yet are still in survival mode. In many places, dining outside has been allowed for weeks or months. That’s a problem for restaurants that don’t have any space outside. In other places, indoor dining is allowed, but only at reduced capacity, which is a killer in the tough restaurant business.

One restaurant owner who is doing fairly well – he has a corner restaurant in San Francisco with wide sidewalks on both sides, and all his tables fit outside – told me that a sushi chef he knows with a tiny sushi place that seats only a few people switched to takeout, and suddenly there were no more limits to how many people he could feed, and his business boomed, and he hired another sushi chef to keep up.

There are a few winners. Those that manage to be open and have enough room outside are busy and hard to get into. Others restaurants gave up.

Inside dining at restaurants in California can start on Monday, but only at 25% or 50% of capacity, depending on county. No restaurant can survive for long operating on Friday and Saturday nights at 25% or 50% capacity. 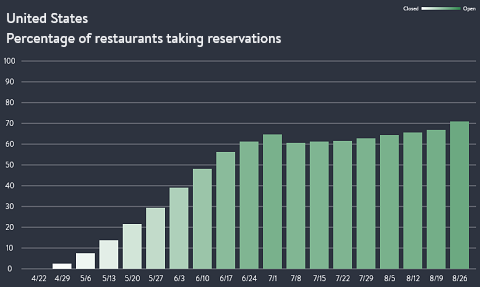 Another measure, “seated diners,” shows how many people actually sit down in restaurants to eat, drink, and be merry. This is a measure of the business volume restaurants are doing.

OpenTable provides data on seated diners, whether they’re walk-ins or had made reservations online or by calling, based on a broad sample of 20,000 restaurants that shared that information with OpenTable. It compares daily “seated diners” on the same weekday in the same week last year.

Overall for the US, there was the plunge to -100% (meaning zero seated diners), then the recovery, then the resurgence of the virus that caused some backtracking, and a renewed but more gradual recovery. Six months into the Pandemic, “seated diners” on August 27 were still down 47% from the same weekday in the same week last year (year-over-year, seven-day moving average): 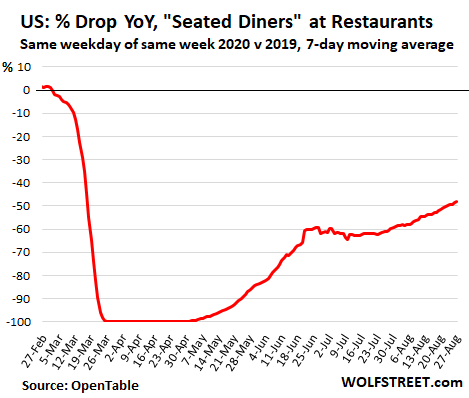 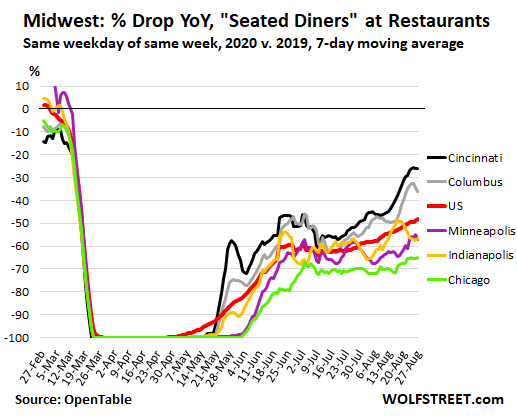 Pittsburgh is an interesting case (black line in the chart below). If you want to find a letter for the type of recovery in Pittsburgh, it would be two letters: the “LN-shaped” recovery.

First, the plunge in seated diners in March; then the flat part when they remained closed; then the recovery starting in early June. But soon, Covid cases surged, amid indications that people partying in indoor venues were infecting each other, and then infecting others afterwards, and by early July, restaurants were shut down again. This caused the number of seated diners to plunge briefly to zero (-100%), before restaurants could reopen. But this phase of the recovery has been slower, and the 7-day moving average as of August 27 is still below where it had been in late June.

New York City’s daily number of seated diners is still down 83% (7-day moving average), a notch higher than San Francisco and Honolulu, which we will get to in a moment:

Cities in the South:

The chart of the cities in the South is kind of wild – in part because of New Orleans (spiky brown line). And it has to do with Hurricane Barry last year.

On July 10 and 11, 2019, most restaurants in New Orleans shut down as Barry was heading for the Louisiana coast. So in the year-over-year comparisons of seated diners, the daily number for July 10 and July 11, 2020, when quite a few restaurants were open, spiked respectively by +83% and +140%. The 7-day moving average smoothened out the spike somewhat, but it remains huge — a result of a hurricane last year and not a major city-wide food-extravaganza this year: 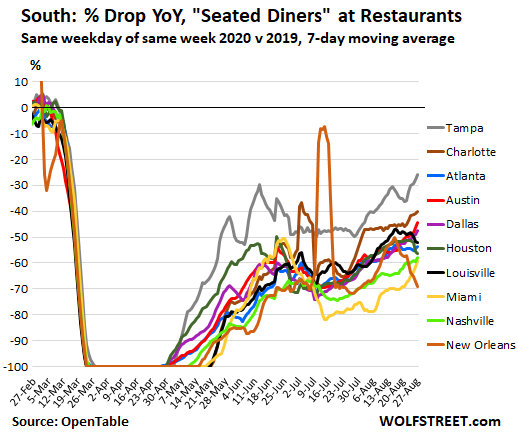 There are two cities in the West and Hawaii where restaurants are worse off than in New York City: San Francisco and Honolulu. For both of them, the 7-day moving average of seated diners is still down 88% year-over-year. Both of them are big tourist destinations. Some tourists are driving into San Francisco, and a few are flying in, but not many. And Hawaii has essentially shut down its tourist business. So tourist-focused restaurants face that additional problem.

Al-fresco dining in San Francisco is limited by lack of sidewalk space or parking space for many restaurants. The City closed a few streets to traffic, so that restaurants there can offer outside seating, and that’s wonderful and vibrant and a lot of fun. But it’s not enough. Starting next week, there will be some limited indoor dining, and the curve should tick up further, but this recovery is going to take a long time (US in bold red): 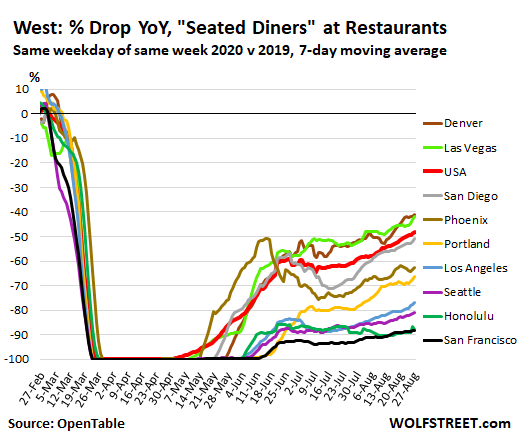 131 comments for “The State of the American Restaurant, City by City”