Other countries have huge trade surpluses, which bolster their financial system and economy. The US has huge trade deficits and huge budget deficits and a ballooning public debt, and businesses carry an enormous pile of debt, but the economy and financial system are propped up by the US dollar’s role as the dominant global reserve currency – a currency that every central bank must hold in large amounts. There has been speculation that this status is threatened, and there have been suggestion that the dollar would collapse soon, or whatever. So how did the dollar do as global reserve currency during the turmoil in the second quarter? 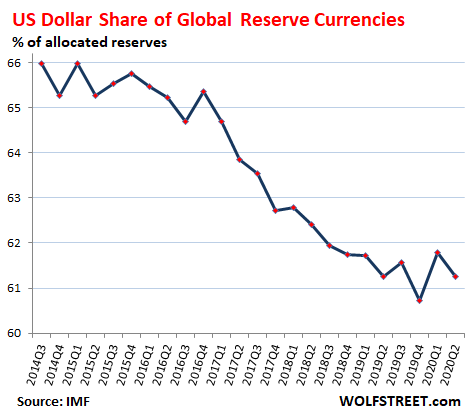 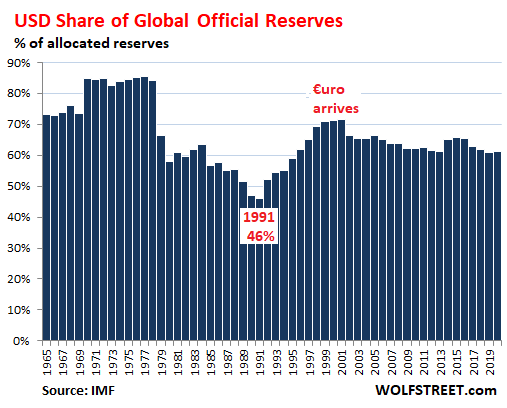 The euro hasn’t collapsed yet either.

The meme surrounding the creation of the euro at the time was that it would reach parity with the US dollar as global trade currency, global investment currency, and global reserve currency. In terms of the latter, the dreams were first scrambled by the collapse of the euro bubble in 2000, when European stocks crashed horrendously, after their huge run-up. They were further scrambled during the Euro Debt Crisis from 2010 to 2012.

But over all these years, the euro has been replacing one after the other the national currencies of EU member states, from the original five to 19 currencies currently. And the euro’s share of global reserve currencies has been for years ranging between 19% and 21%. In Q2, it ticked up a smidgen to 20.3%.

And the ballyhooed Chinese renminbi?

When the IMF included the Chinese renminbi (RMB) in the currency basket of the Special Drawing Rights (SDR) in October 2016, the renminbi became officially a global reserve currency. But progress has been glacial. In Q2, the RMB’s share of global reserve currencies (short red line near the bottom) remained flat at 2.0% compared to Q1. It is a tad ahead of the Canadian dollar (1.9%) and the Australian dollar (1.7%), but far below the yen (5.7%) and the pound sterling (4.5%): 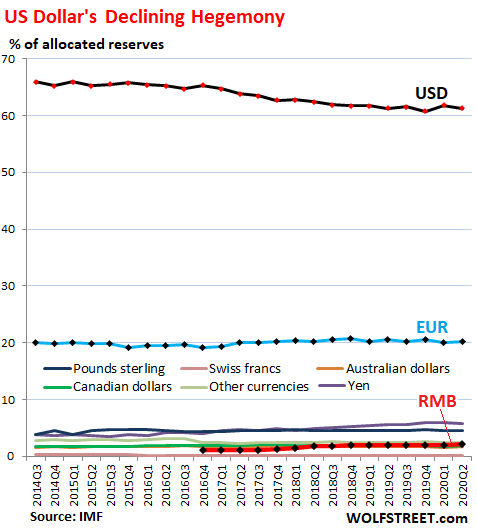 The other reserve currencies under a magnifying glass.

The chart below holds a magnifying glass over the reserve currencies that were all bunched up at the bottom of the above chart. The yen has backed off a little from its surge that had started in 2015, and peaked at 5.9% in Q4 2019 and Q1 2020. In Q2, it ticked down to 5.7%.

The pound sterling (GBP) has remained relatively stable despite the Brexit uncertainties. 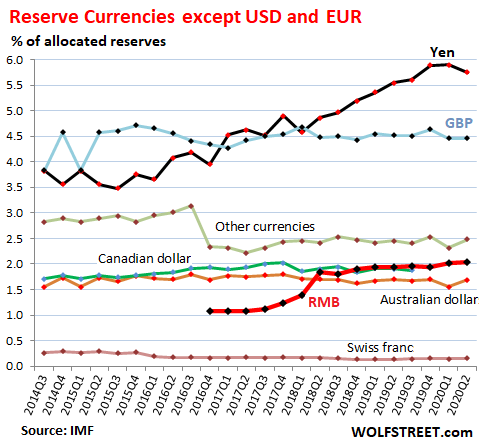 The US dollar’s status as the dominant reserve currency and as the dominant international funding currency creates a lot of demand for dollar-denominated instruments, and permits the US to fund its gigantic trade deficits and its even more gigantic fiscal deficits. The status of the dollar as the dominant, if declining, global reserve currency has enabled the trade policies of the US government, the policies of foreign governments, and the drive to globalization (offshoring of production) by Corporate America.

The trillions flying by so fast, it’s hard to even count them. But somebody had to buy these Treasury securities. And it wasn’t just the Fed. Here’s who. Read... Who Bought the $3.3 Trillion Piled on the Incredibly Spiking US National Debt Since March?

94 comments for “How Has the US Dollar Held Up as “Global Reserve Currency” During Q2 Turmoil?”