A light goes on after more than a decade of falling electricity demand. No business wants to operate in a declining industry.

You could practically hear the Champagne bottles pop during electric-utility industry Zoom meetings when California Governor Gavin Newsom issued the executive order to phase out the sale of new cars and light trucks with internal combustion engines by 2035 in the state – though sales of used ICE vehicles would continue beyond that date.

While the announcement was technology-neutral – “all new passenger vehicles to be zero-emission by 2035,” it said – the top contenders are battery-electric vehicles (EVs), with hydrogen-fuel-cell vehicles running in distant second place. EVs would create demand for electricity.

California’s electric utilities and power producers, and power producers in other states from which California buys electricity, have had a big problem since 2008: Despite 8% population growth in the state and 32% “real” GDP growth (adjusted for inflation), electricity sales to end-users peaked in 2008 and then zigzagged down, eventually by 5% to 255,224 gigagwatthours in 2018, the lowest since 2005, according to the latest annual data available from the EIA: 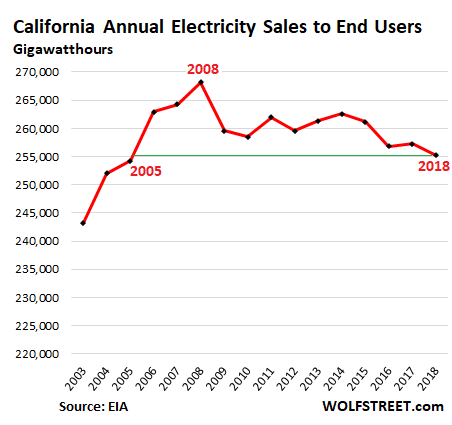 The drop in electricity demand was due to a long list of efficiency improvements, such as the switch from incandescent light bulbs to florescent lights and then to LED lights, more efficient lighting systems in cities and commercial areas, more efficient electrical equipment, such as air conditioners for businesses and households, etc. In addition, rooftop solar power production by households expanded over the years and ate into sales by utilities.

Maintaining the costly infrastructure is an expense that cuts earnings, and when demand declines, Wall Street hates you for reducing earnings by doing maintenance and instead wants you to increase earnings by cutting maintenance (with catastrophic consequences).

But expanding the infrastructure to accommodate growing demand is a capital investment funded by cheap debt from Wall Street. The investment and debt initially don’t impact earnings but are put on the balance sheet as assets and liabilities. The investment is depreciated in small increments over decades and the interest on the debt is expensed. In return, the investment generates revenue growth.

That has always been the business model of utilities: Borrow cheaply, invest in capacity additions, and gradually increase sales and earnings that allow you to pay gradually increasing dividends, and Wall Street loves you for it.

But that model is based on steadily rising electricity demand. And when demand began tanking in 2009, the model fell apart.

In addition to the long-term decline in demand for electricity – this is an issue in the US overall – the industry has the issue of enormous idle capacity in the middle of the night when electricity demand is low, compared to peak demand during hot afternoons.

The system is built to handle foreseeable peaks – such as 3 p.m., during a hot afternoon. This works until there’s a record heat wave when people are working from home, instead of in an office, and crank up the AC at home, while the nearly empty office buildings too crank up the AC, causing a historic spike in electricity demand, as we’ve had recently, which can jumble the equation for grid operators and power producers.

The irony is that the higher peaks are happening to the relentless drumbeat of overall declining electricity demand. But idle capacity is very expensive for utilities. And building enough idle capacity to meet never-before-seen peaks gets even more expensive.

Now there are hopes that EVs will help reduce this idle capacity when people charge up their EVs in their garages at night. This would provide a lot of revenues during a time of the night when the equipment would normally sit unused.

Ideally, growth in electricity sales would come in two ways: from more consumers plugging in their EVs at home and running up their electricity bills (instead of their gasoline bills), and from an increasing number of charging stations that consumers increasingly frequent.

Charging stations are automated. There is no attendant, no cashier, no shop, no building. Just electrical equipment and parking. No tanker trucks have to be able to pull in to refill several underground tanks, as they do with gas stations, and the space needed is much smaller. There are no fuel spills and no leaking underground tanks, and no soil contamination that will doom the property value.

Charging stations are often near restaurants or some stores or a cafe where drivers can spend 30 minutes. Other drivers work or play video games in their cars.

Here in San Francisco, there is a charging station one block from our place, with several superchargers that can accommodate all EV models. When they built the facility a few years ago, PG&E put in an underground cable to a trunk line that can handle the electricity demand. The basic utility model: Borrow, make a capital investment, and collect revenues for decades to come. This is good business.

The nearest gas station is several blocks away, and since there is no competition and it’s in a touristy area, we lovingly call it “our rip-off station” and avoid it. The nearest competitive gas stations are a mile away. One after the other, gas stations have been shut down over the years, and the lots were fenced in and sat empty for years until eventually the contaminated soil was removed, and housing was built on top of it. That process of eliminating urban gas stations started years ago. Now it’s going to speed up.

Charging stations are a lot cheaper to build, and the utility will eagerly invest to provide the power, which then translates into decades of a growing revenue stream. That’s how a utility’s business model works.

Where’s the juice coming from?

In terms of power producers, the revenue opportunities spread out this way, according to the most recent annual data from the EIA (2018):

From other states: Nearly one-third of California’s electricity was purchased from power producers in other states, a good part of it renewable (hydropower, wind, and solar). In 2018, power from coal plants was down to 4% of total electricity demand in California and is expected to reach zero by 2026.

Selling electricity to California’s utilities is good business, and I assume the owners of the wind farms in West Texas – Texas being by far the largest wind power producer in the US – have figured this out too.

From California: A little over two-third of the electricity sold in California was produced in California. Nearly half of it came from renewables (hydropower, wind, solar, biomass, geothermal, etc.). Natural gas-fired power plants provided over 40%. Nuclear power was down to the two reactors at the Diablo Canyon power plant, to be retired in 2024. And coal-fired power generation is already finished in the state.

The problem for power producers and electric utilities has been the decade-long decline in demand. Now the hope is that EVs will change the equation – that eventually there will be enough EVs in the fleet to turn the curve around, to cause electricity demand to increase, and to cause idle capacity at night to be better utilized.

This process has been moving at a snail’s pace in recent years — as you can see in the above chart with the continued decline in electricity demand despite the rise in EV sales in California — and will be gradual going forward. Even if the sales ban on ICE vehicles in 2035 holds, there will still be a large number of ICE vehicles in the fleet by then. However slow this process may be, for electric utilities, it will be a breath of fresh air that may revitalize their half-dead business model.