Ecommerce Spiked to Record. Mall Stores Got Hung Out to Dry. Walmart’s Online Sales, Still Woefully Behind, Shot Up 74%

Walmart US ecommerce sales set the tone. Being the largest grocery seller in the US, it didn’t have to close its stores. Nevertheless, its ecommerce sales soared 74% in the first quarter, compared to Q1 a year ago, Walmart reported today. This would be an increase of $3.2 billion from a year ago to $7.5 billion. But Walmart US had fallen woefully behind during the early years of ecommerce; while it is now rapidly catching up, its ecommerce sales in Q1 were still only 8.5% of its Walmart US sales.

But Walmart’s 74% surge in Q1 (up from prior increases in the 30% to 40% range) includes “strong results” for its online grocery business. This is a sign that consumers are beginning to see the possibilities of shopping for groceries online, whether the order is being delivered to the home or picked up at the store.

The Commerce Department today reported ecommerce sales (along with revised retail sales) for the first quarter (January through March). But the calendar quarter doesn’t line up with the Q1 reporting periods by retailers (February through April). And the shifts due to the pandemic fell into the last few weeks of the calendar quarter, when overall retail sales began to plunge.

Nevertheless, ecommerce sales in Q1 – and this includes the ecommerce sales of brick-and-mortar retailers such as Walmart, Home Depot, and Macy’s – jumped 14.5% from the first quarter last year, to a record $160.3 billion (seasonally adjusted).

Note the drop in ecommerce sales during the Financial Crisis, producing the only three quarters of year-over-year declines in the recorded history of ecommerce (bottoming out at -7.7% in Q4 2008). In this crisis, the opposite is happening: 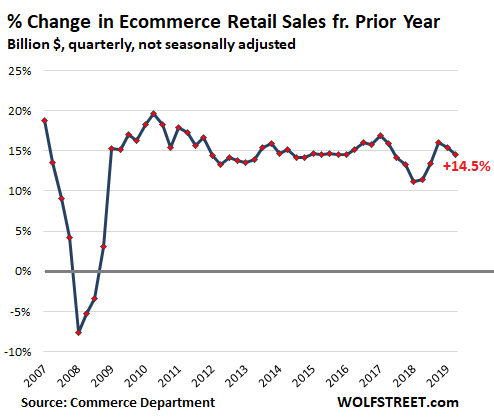 Retail sales include sales at gas stations, auto dealers, and grocery and beverage stores. These categories account for 55% of brick-and-mortar retail sales. So far, they have largely been able to resist ecommerce – though that’s changing for used vehicle dealers and supermarkets, which face increasing online competition, including from Walmart’s online grocery sales.

It’s the remaining 45% of brick-and-mortar sales that are getting crushed – largely retailers that populate shopping malls and strip shopping centers. Let’s call them “mall stores”: They include these categories, with sample bankrupt chains in parentheses:

Combined sales at these “mall stores” had peaked in Q4 2007 at $164 billion, fell during the Financial Crisis, then spend years trying to climb back to the 2007 level, but never quite made it. Since 2015, sales at these mall stores has trended lower as the bankruptcies and liquidations fell on top of each other. Then in Q1 2020, sales plunged 11% from the prior quarter and 11.6% from a year ago, to $137 billion, the lowest level this century, even as ecommerce surged: 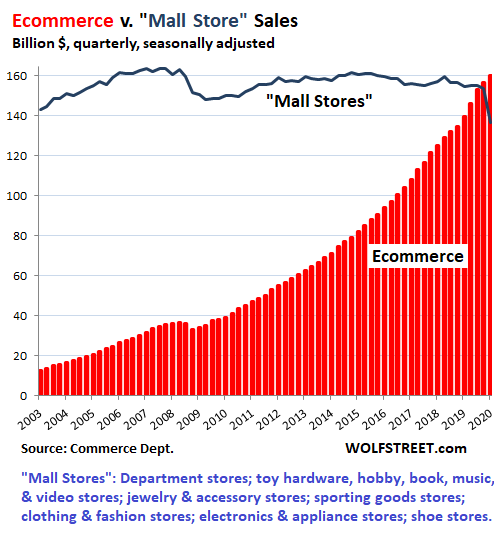 Before the pandemic began scrambling up retail sales, eMarkerter estimated the market share of the top 10 US ecommerce sellers as a percent of total ecommerce sales this way (as of February 28):

Target had made its way into the lineup for the first time. Walmart over the years has worked itself into second place, surpassing eBay and Apple. And Macy’s which had been closer to the middle of the list, has fallen to the bottom of the list. Retailers that use the Amazon platform as third-party vendors count as Amazon retail sales. The combined market share of the top ten amounts to 72% of ecommerce sales. The remaining 28% is carved up by myriad other retailers.

The Commerce Department’s retail and ecommerce sales exclude travel services and tickets of all kinds (they’re not considered “retail” but services). So the plunge in sales of airline tickets and tickets to entertainment or sports events or movie theaters is not included in the data.

The second quarter will fully display the shifts and effects of the pandemic on retail sales. We know already that sales at the “mall stores” will plunge further even as some are now gradually re-opening, while others are tangled up in bankruptcy proceedings. And from what retailers have said so far, their ecommerce sales will soar. These dynamics will completely change the above ecommerce-vs-mall-stores chart.

Given how habit-forming ecommerce has been over the past 20 years among consumers, it will be interesting to see if brick-and-mortar retailers can unwind the pandemic-produced market-share gains of ecommerce; or if, as I suspect, many of these gains are permanent, with most consumers content to keep going that way, which would leave brick-and-mortar stores and the properties they occupy in an untenable situation a lot sooner than anyone expected.

For mall REITs, the disaster came in two phases: first, the brick-and-mortar meltdown, then Covid-19. Read…  Shares of Mall REITs Jumped 12% Today, But Have Collapsed So Far It’s a Barely Visible Blip

64 comments for “During the Last Financial Crisis, Even Ecommerce Sales Plunged. Not This Time”