The disaster came in two phases: first, the brick-and-mortar meltdown, then Covid-19.

But despite that one-day surge, the index remains down 76% from the peak in July 2016. This collapse of the sector came in two phases: Phase one, from July 2016 to February 22, 2020, the relentless brick-and-mortar meltdown that has been going on for years, powered by the shift of retail sales to ecommerce, resulting in tens of thousands of stores being shuttered over the past four years; and phase two, from February 22 onward. In phase one, the index plunged 43%. In phase two, it plunged 58%, including today’s 12.4% surge to 27.9 (market cap data via YCharts): 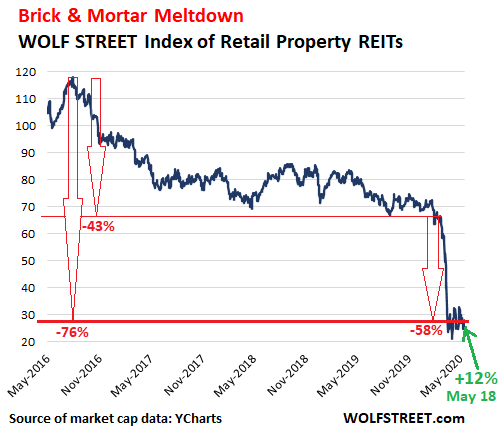 The latest drumbeat came today when JCPenney, which had filed for bankruptcy protection on Friday, said in an SEC filing that it would permanently close about 242 of its 846 remaining stores by next year. Earlier in May, Neiman Marcus, J.Crew, and Stages Stores filed for bankruptcy. All of these efforts to restructure the retailers will come with gobs of store closings. A bankruptcy procedure allows companies to break their store leases, and landlords get to stand in line in bankruptcy court.

Even in the three-plus years before Covid-19, the dynamics for mall and shopping-center landlords, including publicly traded REITs, has been a drumbeat of gloom under the brick-and-mortar meltdown.

At the time, this was a function of retail sales switching to online operations, including to those of brick-and-mortar retailers. Department store chains were hit the hardest and closed thousands of large anchor stores. Even surviving chains, such as Macy’s have been on a relentless store-closing binge.

Then came Covid-19. For mall landlords, the lockdowns, when most retail stores were temporarily closed, have turned into a mega-problem as many retailers have stopped making rent payments.

For example, GAP announced on April 23 that it was running out of money, and that it would issue $2.25 billion in bonds to get through this, and that it would not pay April rent. Simon Property Group has 412 Gap stores, including Banana Republic and Old Navy stores, at its malls, making these stores its largest tenant in terms of rents.

S&P Global highlighted this mess today in its report on rent collections, based on data released by US REITs. These are percentages of April rents that REITs reported to have collected by the week ended May 15:

Some of the malls are now opening up again, and some – but not all – retailers in those malls are now also opening up again, with many restrictions and prudent practices to reduce the risk of infection, both for their employees and customers. Other retailers are delaying a bankruptcy filing and subsequent liquidation until they can reopen their stores for liquidation sales. Lord & Taylor, the iconic department store, has already announced this strategy.

For the retail property REITs that were already stressed from the brick-and-mortar meltdown going into the Covid-19 era, this is a gigantic mess that compresses what was expected to transpire somewhat manageably over the course of many years into a few months.

Many mall landlords already made plans to repurpose parts of malls or entire malls that are in appropriate locations into offices and housing, which might require bulldozing the structures and starting from scratch. This is being done successfully, but it takes a lot of capital and time, and only works in appropriate locations.

One thing is becoming increasingly clear: There is no way back to the Old Normal of retail – no matter how much money the Fed prints. That train left years ago. Covid-19 will be a powerful impetus to dramatically, rather than gradually, change the retail scene in America. And retail property REITs – retail property landlords more generally – are going to have to figure out what their role in it will be.

Investors bet on this outcome for years. Covid-19 just sped it up by a few months. Department Stores Are Toast. READ…  Zombie J.C. Penney Finally Files for Bankruptcy, in Deal with Distressed Debt Funds. Stock and Some Bonds Wiped Out

99 comments for “Shares of Mall REITs Jumped 12% Today, But Have Collapsed So Far It’s a Barely Visible Blip”