Frazzled by the sudden appearance of Financial Crisis 2, the Fed scurries in every bailout direction.

Corporate bonds have come under serious stress, starting on February 24 and building in a crescendo over the past 10 or so trading days. During this sell-off, credit-risk concerns are suddenly shooting to the top, as bond prices are dropping, and yields are surging. Financial stress is spreading. This turmoil makes it more difficult and more expensive for companies to raise funds by issuing new bonds.

And yield spreads have blown out. The spread is the difference between the yield of a corporate bond and the yield of a Treasury security of equivalent maturity. This way, the spread measures credit-risk concerns, as Treasury securities are assumed to be nearly free of “credit risk,” since the Fed’s printing press can always print the US out of a default.

These credit-risk concerns have blown out suddenly.

The average spread of bonds rated BBB widened to 3.68 percentage points as of last night (ICE BofA US BBB Effective Yield Index). BBB is the enormous and ballooning $3.3-trillion category of “investment-grade” bonds just above “junk” that everyone is fretting about. And this spread of 3.68 percentage points is the magic number that the index blew through on September 15, 2008, the day Lehman Brothers filed for bankruptcy: 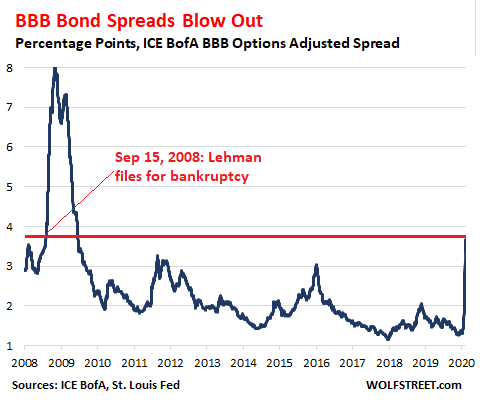 Everyone is fretting about the BBB category of bonds because it’s so huge – it accounted for about half of all investment grade bonds – and because many of these bonds are going to be downgraded to junk during a downturn. So here we are.

The BBB category is continuing to get new entrants from the top down. For example, it will get Boeing. Earlier this week, and at least a year too late, Standard & Poor’s downgraded Boeing – which has been in an existential crisis after it blew $43 billion on share buybacks – to BBB.

These BBB-rated bonds, by their sheer mass of $3.3 trillion are thickly populating every investment-grade bond fund. And they have sold off sharply since February 24. Companies in that category find it now difficult and much more expensive to issue new bonds to raise new money to service existing debts.

At the next step down, the lovely moniker “junk bonds” applies. It covers a broad range of about $1.3 trillion of bonds with ratings ranging from just below “investment grade” to bonds that are about to default or are already in default. This includes names such as Tesla, Netflix, Ford, many airline bonds, and toward the bottom, much of the collapsing shale oil-and-gas sector.

On Standard & Poor’s ratings scale, the junk-bond range starts with BB+ (non-investment grade speculative) and spans the BB and B ratings below it, CCC+ (substantial risk), CCC (extremely speculative), CC and C (default imminent, little prospect for recovery), and finally D for default (here is my cheat sheet for bond credit ratings).

In the BB category of junk bonds, the average spread widened to 6.70 percentage point as of last night, which is the spread that the index blew through on September 25, 2008, ten days after the Lehman bankruptcy. During the peak euro debt crisis in October 2011, the spread also revisited that level: 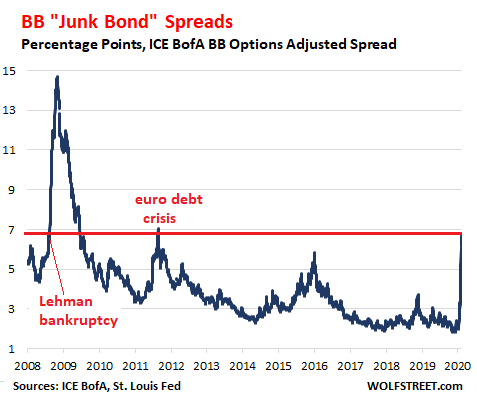 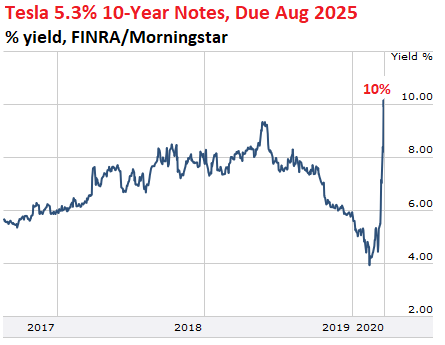 This turmoil all around, including in the bond market, has produced large losses for the biggest asset holders. And they squealed for the Fed to unleash the bailouts. Then there’s the threat of ultra-easy credit getting a little tighter and more expensive for Corporate America, the threat of spillovers from the repricing of stocks and bonds to other markets, plus pre-existing turmoil in the repo market, and the threat all this could pose to the banking system.

That’s what you get when a virus hits the totally over-ripe Everything Bubble – the biggest bubble the world had ever seen, the one that the Fed had spent a decade inflating and denied ever being able to see – which had already started to come apart at the seams late last year.

If the Fed hadn’t spent a decade inflating such a mind-blowing Everything Bubble (that had already begun to wobble), the financial reactions wouldn’t be nearly as chaotic. Read… Treasury Market, Gold Go Haywire as Fed Struggles to Contain What’s Turning into Financial Crisis 2