If the Fed hadn’t spent a decade inflating such a mind-blowing Everything Bubble (that had already begun to wobble), the financial reactions wouldn’t be nearly as chaotic.

The sell-off among US Treasuries with 10-year maturities is seriously rattling nerves. The 10-year yield spiked to 1.22% early this morning (when the price of a bond falls, its yield rises by definition). The problem began Monday morning last week, March 9, when suddenly the 10-year yield started rising from its historic low of 0.32%. In the eight trading days between early March 9 to early March 18, the yield spiked by 90 basis points, having roughly quadrupled!

As I’m writing this, the 10-year Treasury is very volatile, currently trading at a yield of 1.14%. And this madness is happening even as the Fed has rolled out historically huge financial-crisis bailout measures in part to get control over the long-dated Treasury market. In the chart, also note the spike yesterday: 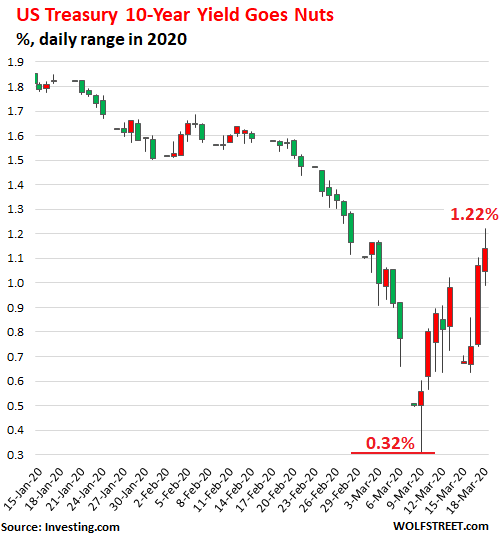 The sell-off in Treasuries further up the maturity scale has been even sharper: The US Treasury 30-year yield has spiked by 1.1 percentage points from a low of 0.70 early March 9 to 1.82% early this morning. In highly volatile trading today, it then fell to 1.58% only to re-spike to 1.79% at the moment.

Treasury securities and gold are seen as haven assets that investors flock to during rough uncertain times, when other asset prices around them plunge. And this buying pressure normally drives up the prices of Treasuries (yields fall) and gold, and it did until the wee hours of March 9. Then suddenly it got serious.

So why the sell-off in long-dated Treasuries and gold, even as stocks are plunging and as the housing market in many areas in the US – particularly where it had been the most inflated – has essentially shut down due to lockdowns and other restrictions?

Here is my theory. The reasons fall largely into two categories:

One, in terms of Treasuries, there is the expected tsunami of supply as the government will implement stimulus and bailout packages that have to be funded by selling Treasury securities. The rumored amount of this stimulus package keeps growing. Treasury Secretary Steven Mnuchin said that it was already over $1 trillion. Others have called for $2 trillion. That’s a heck of a lot of debt to issue in a short time.

The Fed will be buying those securities. But who else will be buying when yields are still this low? That’s the fear among potential buyers – that yields would have to rise further before this becomes attractive for buyers in the future, and current buyers would lose money. And so potential buyers other than the Fed are stepping back.

Two, in terms of gold and Treasuries: Margin calls are going out, as the continued collapse in stock prices and the sell-off in junk bonds are putting pressures on leveraged portfolios, forcing people or entities to sell their liquid assets. Those that hold Treasuries and gold (“paper gold”) would choose those assets because they can be easily sold in large quantities and because they have done very well recently, and sellers can lock in those gains and deal with the margin calls.

Both gold and long-dated Treasuries have had a phenomenal year. Gold has soared by 33% from June 2019 to March 9. And Treasuries had a great year as well.

But this sell-off in long-dated Treasuries and gold also shows to what extent this market is under stress as the whole financial house of cards is threatening to unravel into what I will now call Financial Crisis 2.

This Financial Crisis 2 was not triggered by mortgage lending or consumers or banks, but by the overripe historic mind-blowing Everything Bubble, including the biggest corporate credit bubble the world has ever seen, being hit by the efforts to slow the spread of the coronavirus. But if the Fed hadn’t spent a decade inflating such a mind-blowing Everything Bubble (that had already begun to wobble), the financial reactions wouldn’t be nearly as chaotic.

Chapter 11 bankruptcy that wipes out shareholders is the correct solution for collapsing share-buyback queens. US airlines already know this from experience. It works. Read… After Blowing $4.5 Trillion on Share Buybacks, Airlines, Boeing, Many Other Culprits Want Taxpayer & Fed Bailouts of their Shareholders