Someone got spooked. The US Treasury 10-year yield plunged in a magnificent manner to a new record low of 0.66% on Friday morning. When the yield of a bond drops, its price rises, and investors who were long these Treasuries made some money. The yield started out this year at about 1.9%, and meandered lower. By February 20, it was 1.57%. This was the date the economic consequences of the coronavirus began to sink in. A breathless plunge commenced, including a 25-basis-point plunge early Friday to 0.66%. By the close of Friday, it had ticked up 0.74%, having plunged by half in two weeks: 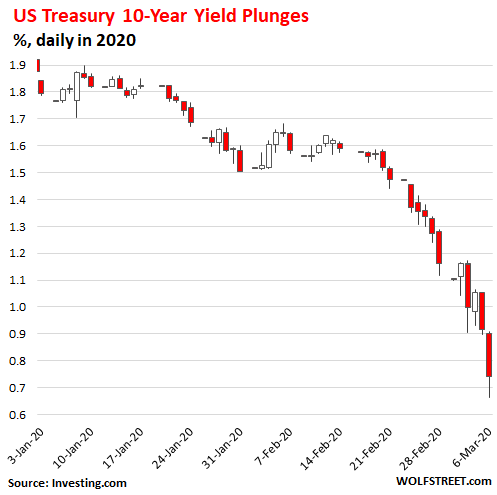 Back in 2007, before the Fed’s interest-rate repression began, the 10-year yield was around 5%.  The chart below shows the trajectory of the 10-year yield since then. Steep drops and bounces are not uncommon, as you can see, but this plunge from over 3% in November 2018 to 0.74%, especially the stretch over the past two weeks, was something to behold: 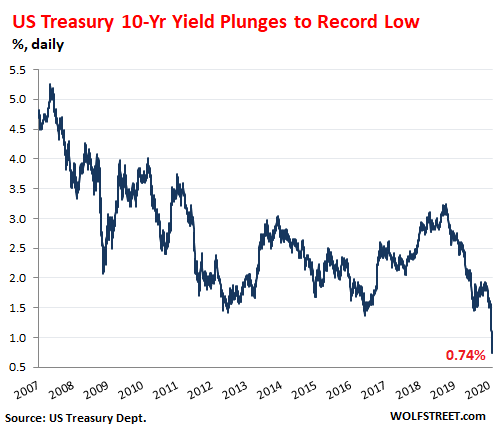 The fear trade has something to do with it. But it’s not yet a broad fear of credit problems across the corporate debt spectrum. It’s a fear in specific pockets of the credit market. In addition to some hedging strategies and some complex trades that blow up when the 10-year yield moves this much this fast – and we may hear some stories about that in the coming days.

There are specific pockets in the corporate credit market that have long been deteriorating, and now took another big hit, among them shale oil-and-gas bonds and brick-and-mortar-retail bonds. And airline bonds got added to the list and got brutalized.

Many airline bonds don’t trade at all on a given day. They sit in a pension fund or a bond fund or in an insurance company’s portfolio, and holders intend to hold them to maturity, collecting the coupon and then getting their money back when the bond matures. And they don’t sell.

Of the dozens of Delta Airlines bond issues outstanding, most of them had no trades on Friday, several had a couple of trades, and only a few bond issues traded actively on Friday, according to bond trading data published jointly by Finra and Morningstar. But among those that traded, there were some fireworks.

For example, this $600-million issue of senior unsecured notes, due in October 2029, was issued in October 2019 with a coupon interest payment of 3.75%. Moody’s rates it Baa3, which is one notch above junk (here are my plain-English descriptions of corporate bond credit ratings). It started trading last October with the yield the 3.75% range and with a price at around 100 cents on the dollar. This year, as the 10-year Treasury yield began falling, the yield of Delta’s 10-year notes also fell, and the price rose. On February 20, the yield bottomed out at 3.21%, with the notes trading at 104 cents on the dollar.

But then airline stocks came unglued as the coronavirus began to impact the travel industry. But airline bonds only gradually followed. On Thursday, this bond traded at 3.68%, and at a price of 100.5 cents on the dollar. But on Friday, all heck broke loose and the yield spiked to 4.5% and the price plunged by 6.4% to 94 cents on the dollar – and Delta is among the stronger airlines in the US (price in $): 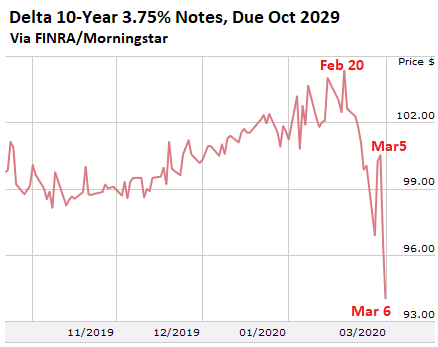 United Airlines also has dozens of bonds outstanding. Hardly any of them traded actively on Friday. But those that did, good lordy.

For example, this $300 million issue of 5% senior unsecured 7-year notes, due in February 2024. Moody’s rates them Ba3, three levels into junk (my bond credit rating guide). The notes started coming unglued after February 20, in parallel with UAL’s stock, likely due to their junk credit rating, which makes those bonds more like a stock in terms of risk. From February 20, when the notes were trading at 106.99 cents on the dollar (nice premium to get the 5% coupon), the price plunged by nearly 10% to 96.8 cents on dollar at the close on Friday (price in $): 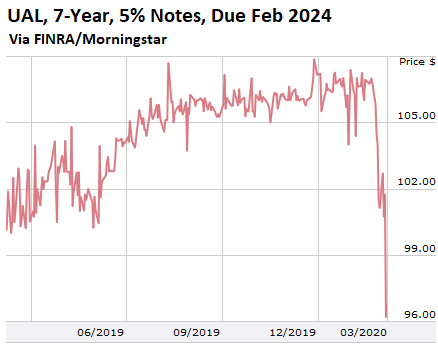 Of the three dozen or so American Airlines bonds listed on Finra, most had no trades on Friday, a few had only a couple of trades. But a few did trade actively, and holy-moly.

Here is my favorite: On February 20, the day before all heck broke loose for airlines, AA announced with impeccable timing the pricing of a new issue of $500 million in senior unsecured five-year notes, due in 2025, with a coupon interest of 3.75%. It was priced at 100% of face value. AA was borrowing the money to fund its pension obligations.

To rush the bonds out the door before all heck would break loose – which the top brass at AA must have seen coming – they were not offered to the US public but only to “qualified institutional buyers” and “to non-U.S. persons in offshore transactions outside the United States,” which dodged the lengthy process of an SEC-registered offering.

They started trading on February 25 and by Friday morning had plunged nearly 20%, to 80.5 cents on the dollar. During the day, they bounced some and closed on Friday at 87.39 cents on the dollar, having plunged 12.6% since their offering price: 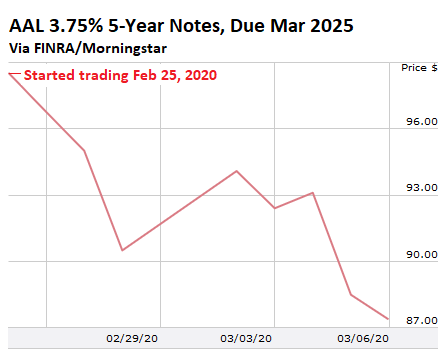 Most of the bonds issued by American Airlines are lower-end investment grade. But there are also some junk bonds in the mix, including these three-year notes, due June 1, 2022, with a coupon of 5.0%. Moody’s rates them B1. And they traded actively. Since February 20, their price has plunged 11.7%, to 92.00 at the close on Friday: 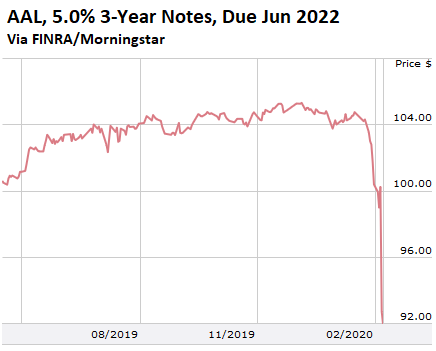 This lack of liquidity — or at least the lack of trades — in the corporate bond market creates some issues because it’s hard to price bonds that are not traded. After a sell-off like this, fund managers might not immediately mark down the bonds that haven’t traded in days or weeks. This type of thing caused some nasty surprises during the Financial Crisis, when some bond mutual funds collapsed after a “run on the fund.”

Its most-traded issue (26 trades on Friday) are 2.65% senior unsecured four-year notes due on November 5, 2020 – eight months from now. The price has remained relatively stable over the past few months, and closed on Friday at 100.6 cents on the dollar. The market is betting that Southwest won’t default over the next eight months. On November 5, barring a surprise default, bondholders are going to get paid 100% of face value plus the final coupon without further drama.

Then there’s its second-most-traded issue (14 trades on Friday): the 2.625% senior unsecured 10-year notes, issued a month ago on February 10, and due in February 2030: Over the last three trading days, the price dropped 3.5% to 98.2 cents on the dollar, with about half of that drop occurring on Thursday with 52 trades: 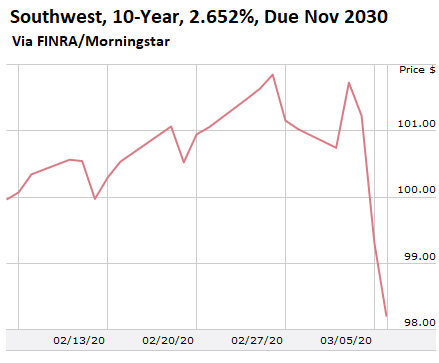 The ratings agencies haven’t lowered the credit ratings of the airlines yet. But the market has lowered them, now dialing in a significantly larger probability of default than a few weeks ago.

80 comments for “It’s Crazy in the Treasury Market, But the Corporate Bond Market is Starting to Dial in the Coronavirus”