Consumers and companies keep plugging, the world has not come to an end.

World trade volume – imports and exports of merchandise across the globe – increased 0.3% in May from April, after falling 0.6% in the prior month, according to the Merchandise World Trade Monitor, released today by CPB Netherlands Bureau for Economic Policy Analysis. On a year-over-year basis, the index fell 0.4%. And it is down 2.1% from the peak in October 2018. This isn’t exactly stellar, compared to 2017 and 2018, when the world trade index increased between 2% and 6% year-over-year.

But it isn’t a “collapse” either. A collapse of world trade occurred during the Global Financial Crisis when companies shut down their ordering process – not knowing if the banking system would still be there the next morning – and when consumers closed their wallets, particularly American consumers who provide much of the oomph behind world trade, given their penchant for imports, but they were losing their jobs by the millions. From September 2008 through the trough in May 2009, the World Trade Monitor plunged 17.5%: 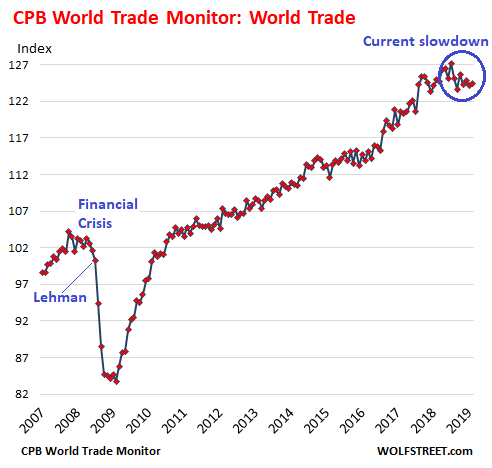 The manufacturing slowdown has been going on for months in the US, the EU, China, Japan, South Korea, and other countries. This is a slowdown, meaning anything from slower growth to actual declines. Manufacturing is still growing in some countries, but more slowly, and is declining in other countries.

The slowdown in auto sales in the largest markets in the world has been one of the drivers, so to speak, in the manufacturing slowdown. New vehicle sales have been falling sharply in China for nearly a year, and they are plunging in India. Auto sales are also declining in the US, but at a much milder pace. And they’re declining in the EU and Japan. The auto market is mature in developed economies and is becoming more mature in China. So, flat or lower demand – as vehicles last longer and people drive less – is going to be the norm going forward. This has hit manufacturing.

Another factor in the manufacturing slowdown was the effort in 2017 and 2018 to front-run the tariff threats bandied about at the time. This caused a surge in orders of manufactured goods, which caused a surge in inventories, which are now dragging down orders as companies are trying to whittle them down by ordering less. This is particularly the case in the US where the inventory pileup is enormous.

Manufacturing is only a small part of the US economy, which is dominated by services, such as finance, healthcare, information services (such as telecoms), professional services (such as computer programming, lawyering, and engineering), and housing. And services are growing at a good clip.

In South Korea, China, Japan, and Germany, manufacturing plays a larger part in the economy, and these countries are more dependent on the manufacturing sector for economic growth. Germany faces a slowdown exacerbated by its focus on the auto industry – automakers, component makers, robotics makers that make and install the industrial robots for auto plants, and producers of specialty materials such as adhesives.

But even in these countries, services play the dominant role, and services are growing. Consumers in Germany are doing their job, consuming.

World trade of merchandise, given this slowdown in manufacturing, has taken a hit, but not the massive hit you’d expect after all the vibrant and daily rhetoric of trade war and tariffs. Turns out, companies are still doing what they need to do, and consumers are still consuming.

Of the largest trade partners of the US, China got walloped the hardest, as you’d expect, but compared to the drubbing China’s trade with the rest of the world took during the Financial Crisis, the current decline is relatively modest, and appears to have bottomed out already.

This chart shows exports from China to the rest of the world, according to data from the World Trade Monitor converted to a three-month moving average. Note the 24% plunge during the Financial Crisis: 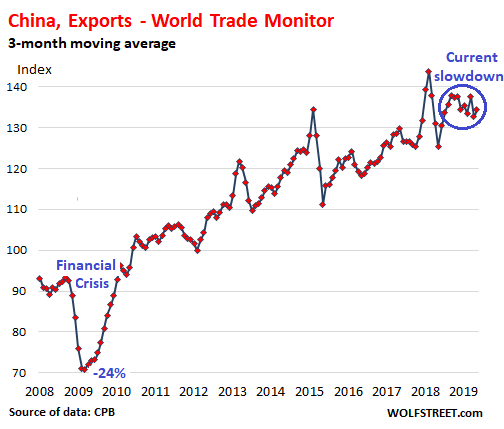 And this chart shows imports into China: 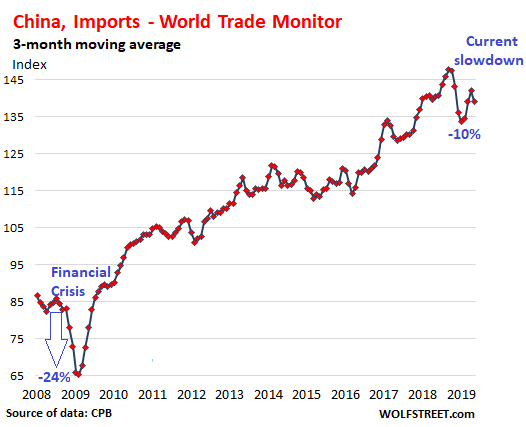 Japan’s exports have been showing declines for the past year, but those declines pale compared to the collapse of Japan’s exports during the Financial Crisis and the sharp falloff following the March 2011 earthquake and tsunami, when Japan’s infrastructure was severely damaged: 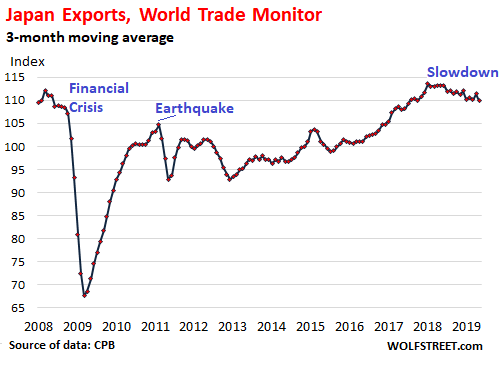 However, Japan’s imports are not showing any decline, with the index reaching a new high in May: 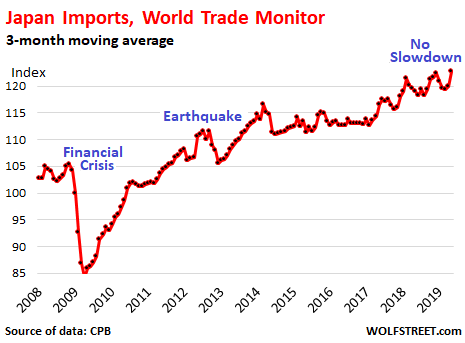 In the Eurozone, there has been some decline in both imports and exports in recent months. While Germany is heavily exposed to the automotive sector and is getting hit harder, other countries such as Greece, Italy, Portugal, and France, are not. Especially in Southern Europe, food exports – such as olive oil, wine, salami, cheese, and other specialty foods – play a larger role among their exports, and there is no slowdown in food products. Also note the impact of the euro debt crisis on imports (red line): 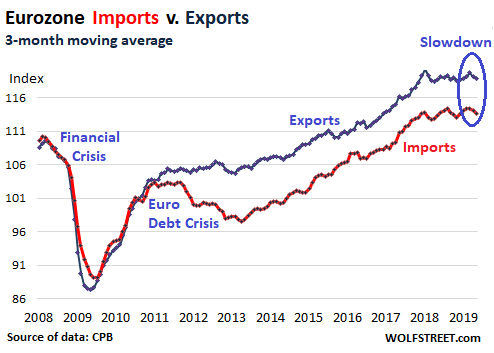 It boils down to this: the trade war and tarriffmageddon have an impact, but companies are still doing what they always do, except they’re shifting their supply chains around, such as from China to Vietnam. Consumers have largely brushed off the rhetoric so far. And services are still strong around the globe.