Car sales in India, the fifth-largest auto market in the world, plunged 24% in June, compared to June last year, after they’d already plunged 26% in May, the Society of Indian Automobile Manufacturers reported. Year-over-year declines have been dragging on for nearly a year.

Sales of “goods carriers,” which are seen as an indication of economic momentum, dropped 18% from a year ago. Goods carriers include vehicles such as these: 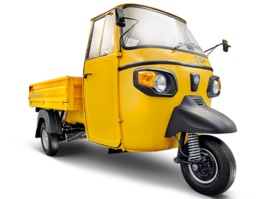 Scooter sales dropped 15% year-over-year. Sales of motorbikes dropped 10%. Sales of mopeds plunged 22% — “an indication of a gigantic slump in economic growth and decline in demand in rural areas,” The Week explained.

In India’s first fiscal quarter, ended June 30, sales of all two-wheel motorized vehicles combined, by far the largest category of vehicles sold in India, fell 12% to 5 million units. Passenger vehicle sales fell 18% to 712,620 units. Within this group, cars fell 23%, utility vehicles 4.5%, and vans 25.7%, according to the  Society of Indian Automobile Manufacturers (SIAM).

“Probably the most prolonged de-growth phase we have seen.”

“I think…this is the worst phase India’s auto industry has seen,” said Rajan Wadhera, president of SIAM and head of Mahindra & Mahindra’s automotive group, when he unveiled the data. Even the once booming ride-share demand has taken a hit. And weak farm income hurt sales of two-wheelers.

“There were patches of de-growth in 2009, 2011 and 2012, but the government stepped in, tax incentives were given and situation got better. This is probably the most prolonged de-growth phase we have seen,” Wadhera said.

He warned of ripple effects throughout the economy, such as more job losses and closings of dealerships. And he clamored for the government to step in and do something, which is what you’d expect an executive of one of India’s largest vehicle makers to say.

“A lot of dealerships have closed down in the past,” he said, citing data from the Federation of Automobile Dealers Association that indicated that around 300 auto dealerships had closed in recent months. And automakers in India have started to cut production. “So the job losses have already started,” he said.

The industry has been clamoring for the government to reduce the Goods and Services Tax (GST) on vehicles to boost sales. And it has been clamoring for the government to introduce the Indian version of the US cash-for-clunkers program during the Financial Crisis. But those hopes were not fulfilled. Instead, GST cuts and subsidies were granted only to the electric-vehicle industry as all three-wheelers (see image above) have to go fully electric by 2023 to combat India’s horrendous air pollution.

In a sales decline of this magnitude, it’s never just one thing that causes it, and so a slew of factors is getting blamed, including overall low consumer demand, higher insurance costs, and financing issues.

These financing issues are the grand biggie.

India’s shadow banks – lenders that are not deposit-taking banks and are outside of the regulated banking industry – provided about 40% of new vehicle loans. And these shadow banks have plunged into a debt crisis.

This crisis has been in the making for years. As India’s regular banks have been grappling with their $190 billion bad-loan crisis and a slew of hair-raising banking scandals, and have tightened up lending as a result, the shadow banks have jumped into the fray, aggressively lending at the grassroots level.

This worked like a charm until one such shadow bank, Infrastructure Leasing & Financial Services Ltd., one of India’s biggest infrastructure lenders, defaulted on a loan payment last year. To limit contagion across the sector, the government seized control of IL&FS, purged its management, and installed a six-member board.

The IL&FS shock made it more difficult and costly for other shadow banks to access short-term funding. The Reserve Bank of India has cut its policy rate three times so far in 2019, from 6.5% to 5.75%, and indicated that it was willing to help the shadow banks if needed, but might tighten liquidity requirements to curtail their growth.

Then in June, the next shoe dropped when another shadow bank, Dewan Housing Finance Corp, a major mortgage lender, missed debt payments. Three credit-rating agencies downgraded the shadow lender in huge chunks to “D” for default. CARE, one of these ratings agencies, still had rated Dewan’s debt AAA at the beginning of 2019, before launching a massive wave of downgrades in a few months to “D.” This is not conducive to investor confidence.

Other lenders, including Reliance Capital and Piramal Capital & Housing Finance, have also been slammed by credit-rating downgrades.

Access to funding has gotten tougher. According to Bloomberg, the shadow lenders struggle with a “record 1.1 trillion rupees ($15.9 billion) of debt due in the third quarter of 2019.” If they cannot access funding to refinance this maturing debt, there will be more defaults.

Bloomberg notes that shadow lenders accounted for about one-third of all new loans over the past three years, as the regular banks have been trying to dig themselves out of their own crisis:

The worst is probably still to come. Observers warn the credit crunch may hit the property sector next. It is heavily dependent on funds from shadow banks, and concerns are already being reflected in some realtor bonds.

The auto sector is heavily impacted, with about 40% of new auto loans being issued by shadow banks, and with these shadow banks now reeling from a debt crisis, after regular banks had gotten sidetracked by their own bad-loan crisis and banking scandals.

Market participants have been clamoring for the government, regulators, and the central bank to step in and do more, and to announce specific measures, and to bail out teetering lenders. And the auto industry has chimed in, clamoring for specific measures too, from tax relief to a cash-for-clunkers program, as the debt crisis has hit the real economy.

Until all this happened, India was a fast-growing auto market. That has not been the case in the US, a horribly mature market where auto sales in 2019 are on track to drop to the level they’d first seen in 1999. Read… New-Vehicle Sales Fall to 1999 Levels: How to Grow Revenues After 20 Years of Stagnation (Yup, You Guessed It)