Folks lining up on both sides of the fence.

My Fed Hawk-o-Meter, applying its analytical magic to the just released minutes of the June 18-19 FOMC meeting, dipped by one point to 20, hovering now in the lower range of the red-line zone, indicating that a rate cut is moving closer as a possibility but is not yet a clear decision: 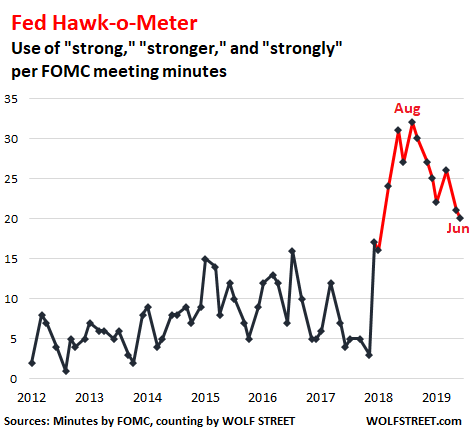 My fancy-schmancy Fed Hawk-o-Meter analyzes the minutes of the Fed’s meetings for tell-tale signs that the Fed sees the economy as very strong or overheating (rate hike); as strong but not overheating (rate unchanged); or as spiraling down (rate cut).

It attempts to clarify in a quantitative and visual manner what the Fed wants to communicate to the markets for the next meeting. The Hawk-o-Meter does so by counting how often “strong,” “strongly,” and “stronger” appear in the minutes to describe the current economy. In the minutes of the June 18-19 meeting, those words appear in this sense 20 times, down from 21 times in the prior meeting minutes.

The three-meeting moving average of the Hawk-o-Meter reduces the volatility in the “data” and clarifies the trends: 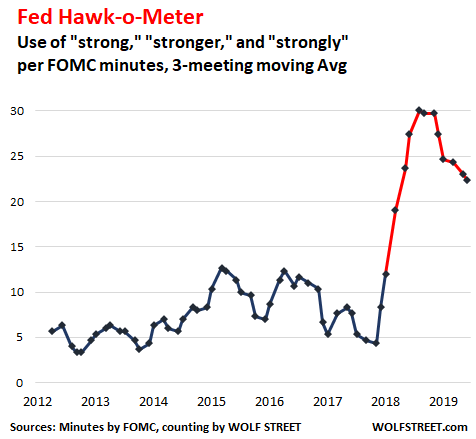 The average mentions of “strong,” “strongly,” and “stronger” per meeting minutes between January 2012 and December 2017 was 7.4 times. The 20 mentions in the June meeting minutes represented an increase of 170% from the pre-redline average.

“Strong,” “strongly,” “stronger” appeared in phrases such as these:

The words “strong,” “strongly,” and “stronger” actually appear 22 times in the minutes, but in two instances, they were used in a clearly different context that made them “false positives,” and I scrubbed those two from the tally:

“Total nonfarm payroll employment expanded solidly, on average, in April and May; however, job gains slowed sharply in May after a strong increase in April.”

“Some participants suggested that although they now judged that the appropriate path of the federal funds rate would follow a flatter trajectory than they had previously assumed, there was not yet a strong case for a rate cut from current levels.”

That was quick: “Patient” disappears.

And the new key word, “patient,” introduced with such market-moving oomph in December, has essentially disappeared, after having been used in the minutes of the prior meeting to indicate, interestingly, that the Fed would also be patient with rate cuts. The word seems to have served its purpose and is being retired. It was mentioned only once, and only to show that the word would be “removed” from the language, in this sentence that is also interesting for another reason:

“In describing the monetary policy outlook, members agreed to remove the “patient” language and to emphasize instead that, in light of these uncertainties and muted inflation pressures, the Committee would closely monitor the implications of incoming information for the economic outlook and would act as appropriate to sustain the expansion, with a strong labor market and inflation near its symmetric 2 percent objective.”

Where is the Fed’s “U-Turn” that Wall Street promised us? Read...  Fed Sheds $38 Billion in Treasuries and MBS in June, Dumps MBS at Record Pace, Exceeding “Cap” for First Time